On July 10, the Department of Health and Human Services ruled that health insurance companies must fully cover birth control, even if an employer objects to it on religious grounds. Thanks, Obama! For real this time, no sarcasm.

Under the Affordable Care Act, insurance companies must cover:

…With respect to women, preventive care and screenings provided for in comprehensive guidelines supported by HRSA (not otherwise addressed by the recommendations of the Task Force), including all Food and Drug Administration (FDA)-approved contraceptives, sterilization procedures, and patient education and counseling for women with reproductive capacity, as prescribed by a health care provider (collectively, contraceptive services).

It’s great news for anyone with a uterus! (Unfortunately for penis owners, condoms and vasectomies are not covered by the act.)

It’s also good news for the rest of society. Colorado recently learned that providing women with free birth control can lead to a huge drop in teen pregnancies and abortions — “between 2009 and 2015, ‘teen births dropped 40 percent, abortions fell 35 percent.’” The state also saved the state $80 million.

Of course, better access to contraception will have even further-reaching effects. Family planning means that people can wait until they’re financially and emotionally ready to have children. That means fewer unwanted children, which means much less suffering for all involved. It also means fewer children born into poverty. It means that children are more likely to be wanted and loved. It means parents can provide their children with adequate food and a decent education, which means children will be more likely to flourish as adults. It means less poverty and crime. It means healthier, happier families and a healthier, happier society.

Contraceptives also have uses beyond preventing pregnancy. Taking oral contraceptives can lower a person’s risk for ovarian cancer, treat acne, and much more. Many women take contraceptives to make periods lighter, less painful, and more regular. That might sound like a minor issue, but for some women, periods are incredibly painful.

Many articles about the new ruling are saying that insurance companies will now have to provide women with “free” contraception, but that’s not quite accurate. It must be noted that this birth control isn’t free, really; it’s part of a health insurance package that employees have already paid for. Referring to birth control costs covered by health insurance as “free” is a bit like saying that a house comes with free air conditioning — provided the occupant pays the electric bill.

Requiring women who already have health insurance to pay for contraception out-of-pocket is like installing a pay toilet in a private residence. It’s unnecessary and intrusive.

Churches and other houses of worship are exempt from the requirement, but conservative religious groups wasted no time in appealing the ruling. They claim that the new ruling will interfere with their religious right to interfere with their employees’ sex organs. How dare Obama try to get between a Hobby Lobby executive and his checkout girl’s uterus! (Note to religious people: you might not have that whole problem with declining church attendance if you’d stop bothering people about their genitals. It’s creepy and gross and we’re starting to wonder if you have some kind of fetish.)

Yes, that’s right: Hobby Lobby will no longer be able to prevent its workers from getting birth control through their health insurance. Time to head down to the nearest Hobby Lobby, pick up some yarn, and knit myself a scarf with the word SCHADENFREUDE on it. I’m going to embroider the words SUCK IT into all of my clothes.

Four federal appeals courts have upheld efforts by the Obama administration to guarantee access to free birth control for women, suggesting that the government may have found a way to circumvent religious organizations that refuse to provide coverage for some or all forms of contraception.

A more recent appeal, by the Baltimore non-profit organization Little Sisters of the Poor, was also unsuccessful. A legal expert on Twitter had some interesting comments about the case: 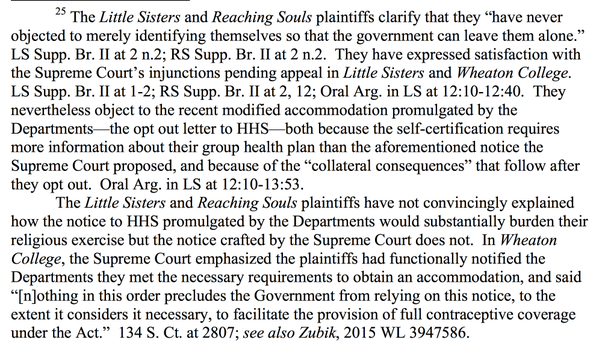 One might even suspect that the plaintiffs in these contraception cases are playing games: https://t.co/VEsXY7K5dV pic.twitter.com/bo0z7bz6Ye

Anti-contraception groups are trying as hard as they can to get the ruling overturned or allow for wider exemptions, but all they’ve done so far is waste time and energy. Give it up, guys. You know the old saying: if you love a uterus, you should let it go. If it comes back to you, it’s yours. But if it gets an IUD, then it was never meant to be.

The CW's 'Two Sentence Horror Stories' Is Bringing Serious Queer and POC Representation to the Genre
Queercore: A Dirty History of the LGBTQ Movement That Spits on Respectable Gays
These Hornet Users From Around the World Shared What They #LearnedInQuarantine
We've Found the Perfect Gifts for Any Occasion, and They're From Pansy Ass Ceramics
English