The 7 Limes Of Gwyneth Paltrow: In Defense Of Celebrity Activism 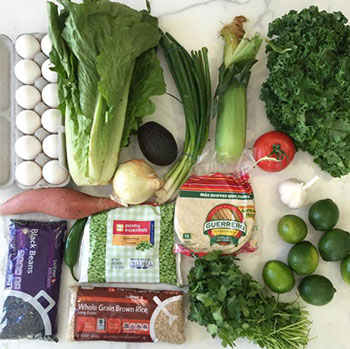 Ever had powdered milk? I have. My mother used to buy it and mix it in with the regular milk to make it stretch. I didn’t taste actual butter until I was an adult, because we bought and ate the generic margarine, the kind they invented to lubricate bomber planes during World War II.

These food scenarios existed because my family never had much money. We never applied for food stamps, and were not as poor as some people, but we were significantly poorer than others.

Today I’m not as poor. I’m a non-famous freelance writer, so let’s not get too crazy about the specifics, but I’ve stumbled my way through life to the happy site of food privilege. (Translation: no more powdered milk or garbage-y margarine.) In my home I’m the Bad Cop with money, but I’m willing to spend it on decent food. I cook a lot because I’m too cheap to eat out at restaurants. And most importantly for my wallet, I am not in possession of any children.

So now that you know me really well and we’re friends, I will tell you that I don’t have a problem with  Gwyneth Paltrow’s recent touristy visit to Poverty.

Mario Batali put her up to the #foodbankNYCchallenge — a awareness campaign and fundraiser for New York’s food banks — and she was given $29 in SNAP benefits (aka the Supplemental Nutritional Assistance Program, aka food stamps).

With it she bought a bunch of stuff you’d find on the ingredients lists in the cookbooks she’s authored: a sweet potato, an ear of corn, a tomato, an avocado, an onion, lettuce, a dozen eggs, black beans, rice, frozen peas, cilantro, something that is probably kale (of course) and seven limes.

Why she needed one lime per day is kind of a mystery, but whatever. A person can live on this for one week. It won’t be exciting, but it’s do-able. She won’t get scurvy, at least, and that should be a comfort to us all.

Problems: Paltrow bought food that was nutritionally sound but really low in calories. Like 1000 per day. Which brings me back to my mother. She often worked two jobs to keep us afloat. She secretaried by day and bartended at night in a working class dive where she, on at least one occasion, had to use the establishment’s behind-the-counter baseball bat to ward off an aggressive customer. She was a petite lady; she needed calories to keep her going. Kale is not so great at this task.

Other problems: Poverty isn’t always just about money. It’s about having time to cook, knowledge of how to cook, and being home at meal times to cook. When it is about money, it’s about being precise, about counting literal pennies, and knowing exactly how many potatoes (or limes) you will need for the week. Buy too much and you’ve wasted fresh produce. Buy too little and one or more of the 21 meals you’ve conjured out of $29 comes out wrong, and then you might as well have just wasted your buck at the McDonald’s dollar menu.

In practical terms, when your mother works two jobs and the schedules are weird and kids are home alone, you and siblings will need food items that are frozen or almost ready to go — the kind of stuff you throw in a microwave or fish out of a crock pot. That means buying cheap processed food and ready-made weirdness that kids and unskilled cooks can prepare. Obviously, Ms. Paltrow and her personal chef don’t face these sorts of challenges.

But here is the take-away brilliance of this situation. Who better, really, who more lightning-roddish, than the occasionally oblivious poster child for skinny, white, macrobiotic, Academy Award-winning, Margiela-wearing, economic freedom to highlight the soul-deadening effects of food insecurity?

Obviously, if you’re already poor, you’re not paying attention to this woman’s struggle to be virtuous and silence her critics with a bit of ice bucket challenge-level activism. Why would you? You’re busy at your crappy minimum wage job that most major corporations — and all conservative politicians — are telling you that you deserve/are lucky even to have.

But if you weren’t already poor, what were you thinking about before GP did this? Did you — internet reader at work, valiantly staving off productivity — know how much a person gets on SNAP benefits? Did you know about how every time your back is turned the Republicans are trying to cut those SNAP benefits? Or about how the Missouri Republicans, specifically, want to police people’s mouths and ban them from buying steak or seafood with it? Have you read Barbara Ehrenreich’s Nickel and Dimed or Lisa Carver’s Money’s Nothing or Linda Tirado’s Hand To Mouth? Will you now? Or will you just chalk it up as another reason to hate the rich and famous before moving on to the next trending topic?

The fact is that the savvy famous know that they can lead cameras and columnists to places they might otherwise ignore, such as that place where all the unsexy poor people are with their gross powdered milk. Audrey Hepburn did it for UNICEF back in the day, and like it or not GP is doing it right now. Because of her you are casually trying to figure out how you’d handle the same amount of money if that were all you had. Also, you are wondering about those limes. But stop doing that because it’s a path to madness. Give some money to your local food bank, instead, and then go get harsh with elected officials who ignore hunger and poverty. Tell them Gwyneth Paltrow sent you.

Oh, Girl, No! The 10 Most Hideous Female Superhero Costumes in Comic Book History
Frankie Grande Shares ‘What Pride Means to Me’ Ahead of His Celeb-Studded Virtual Fundraiser
'You Are Not My Mother' Is a Fresh Take on the Folk Horror Genre
Movie Musical 'Everybody's Talking About Jamie' Is a Flashy and Fun Ode to Non-Conformity
English