The Award Winning HIV 3D Model That Will Give You Nightmares

Written by Kevin Farrell on February 21, 2011
Be first to like this. 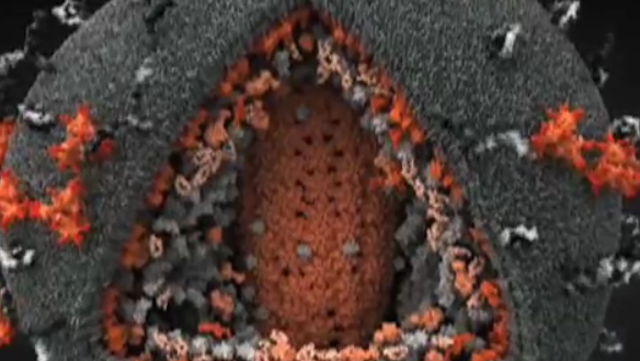 We’ve been accused of sensationalizing news in the past, so let’s begin with a disclaimer: This actually gave me a nightmare. There. Let’s move on.

Mad props to the insanely talented Ivan Konstantinov and his team at Visual Science for crating the most insanely detailed computer graphic of HIV the world has ever seen. The digitalized model of the virus won first place at the 2010 International Science and Engineering Visualization Challenge. We’ve never heard of it before, but we assume it’s like the Oscars of killer virus computer generated models. Or at least the Golden Globes.

The clip is brief, but menacing. This virus even looks like a killer. The model is so high def that it’s expected to be used to educate about the virus in schools via video, posters, and text books. To that we say, get on this shit STAT. HIV is now the number one killer of women worldwide. The number one, y’all! While we let the scientists work on eradicating the virus and finding a cure, each and every one of us are charged with practicing safe sex.

HIV and AIDS are 100% incurable today, but 100% preventable. Get tested often, and make your partners do the same. Practice safe sex with your partners. Every time.

Look at this little terror. You do not want it inside of you!

Are you spooked out by this visualization too? Don’t leave me hanging here.

The 1987 Movie ‘Masters of the Universe’ Was Apparently as Painful to Star In as It Was to Watch
These 12 Gay Poems Explore Queer Love (and Raunchy Lust)
Don't Judge Your Relationship's Success By Its Longevity, and Quit Searching for 'The One'
More Than 20 'Drag Race' Queens Have Been Sculpted Into Sugar, and We're Living For It
English