The Charleston Shooter Killed Because Of His Sad Pale Wiener

When Dylann Roof opened fire on Emanuel African Methodist Episcopal Church in Charleston, he told the gathered congregants he had to do it, because “You are raping our women and taking over our country.”

He immediately pointed his gun at an 87-year-old woman named Susie Jackson. In the end, six of Roof’s nine victims were women. The young man who spoke of protecting white women had no qualms about murdering black women.

The thought of black men preying upon white women is well-accepted on the fetid corner of the internet known as the manosphere. Self-described pickup guru Heartiste awarded golden poster status to a white supremacist who wrote a scenario in which a black man uses a naïve white woman’s liberal guilt to trick her into being raped:

The West is like the stupid white girl at the bar who gets invited to go off on her own by a black guy. She is terrified of looking racist in front of her friends, one of whom is a black girl from the office who she likes to impress with her liberalism.

So she goes happily with the black fella, who turns out to be a savage n*****. Later, after the n***** brutally rapes her without a condom and leaves her in an alley for dead, she thinks, well, at least now everybody knows I’m not a racist.

This scenario — well-meaning white woman punished with rape for not hating black men enough — is almost identical to a well-worn narrative written in the Ralston Health Club’s 1898 eugenicist publication Child Life: before and after birth: a solution of perplexing problems:

Here’s a blockquote of the image above in case you can’t read its old-timey type:

A NORTHERN lady traveling in the South, had with her a beautiful daughter of eighteen, and another of nine; both of the gentlest disposition. This woman and her two girls were enthusiastic admirers of the negroes, of whom she had read in books and papers; and her daughters, the children of an ardent abolitionist, regarded the anti-racials as pets, who had been wronged for generations. The world has come to regard slavery as wrong in its principle; and that issue is forever dead. The living problem is what to do with the swarming millions of negroes that have overrun the South, and are slowly moving to the North. The lady and her daughters found them honest, delightful sunbeams of humanity; as simple as kittens playing in a basket. A private letter from a cousin in a Northern State, announcing that a burly negro had cut the throat of a white teacher after outraging her, did not deter the mother from entertaining an honest African and his son, the latter not over fourteen or fifteen years of age. That same day this lady was gagged with kerosene oil rags, then dragged to a swamp and tied to a tree, where she was compelled to witness the outrage of her daughters, by six negroes, two of whom were the honest African and his strapping boy.

The men who paint all black men as mindless rapists of white women show no concern over the reverse scenario, in which white men assault women of color. In her 1892 publication Southern Horrors: Lynch Law in All Its Phases, civil rights activist/suffragist Ida B. Wells wrote:

When the victim is a colored woman it is different.

Last winter in Baltimore, Md., three white ruffians assaulted a Miss Camphor, a young Afro-American girl, while out walking with a young man of her own race. They held her escort and outraged the girl. It was a deed dastardly enough to arouse Southern blood, which gives its horror of rape as excuse for lawlessness, but she was an Afro-American. The case went to the courts, an Afro-American lawyer defended the men and they were acquitted.

In Nashville, Tenn., there is a white man, Pat Hanifan, who outraged a little Afro-American girl, and, from the physical injuries received, she has been ruined for life. He was jailed for six months, discharged, and is now a detective in that city.

In the same city, last May, a white man outraged an Afro-American girl in a drug store. He was arrested, and released on bail at the trial. It was rumored that five hundred Afro-Americans had organized to lynch him. Two hundred and fifty white citizens armed themselves with Winchesters and guarded him. A cannon was placed in front of his home, and the Buchanan Rifles (State Militia) ordered to the scene for his protection. The Afro-American mob did not materialize.

Only two weeks before Eph. Grizzard, who had only been charged with rape upon a white woman, had been taken from the jail, with Governor Buchanan and the police and militia standing by, dragged through the streets in broad daylight, knives plunged into him at every step, and with every fiendish cruelty a frenzied mob could devise, he was at last swung out on the bridge with hands cut to pieces as he tried to climb up the stanchions.

A naked, bloody example of the blood-thirstiness of the nineteenth-century civilization of the Athens of the South! No cannon or military was called out in his defense. He dared to visit a white woman.

According to a 2013 report from the US Department of Justice, a black woman is more likely to be a victim of sexual assault than a white woman is. An American Indian woman is far more likely than the both of them. And the majority of rapists are white. 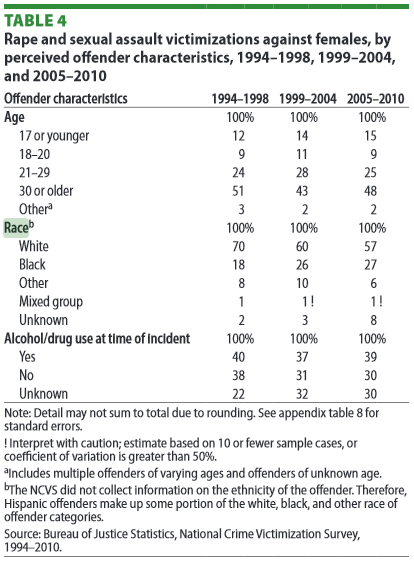 … and one listing those of rapists: 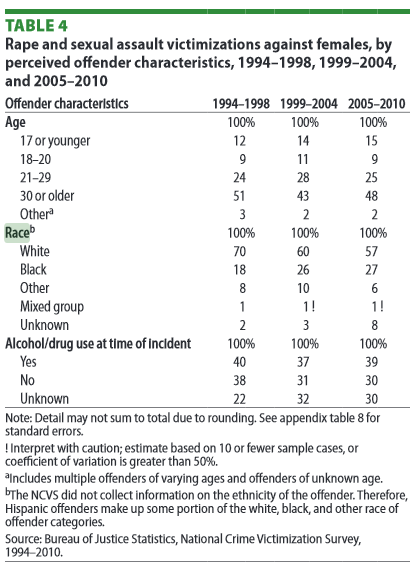 The threat of black men raping white women (and not the other way around) is not realistic. But that’s not what any of this is about, really. Roof’s cousin told a reporter* that “[Dylann] kind of went over the edge when a girl he liked started dating a black guy two years back.”

The comment calls to mind the 2014 Isla Vista murders, in which 22-year-old Elliot Rodger killed six people because he was angry that white women wouldn’t sleep with him. In his manifesto, Rogers wrote, “How could an inferior, ugly black boy be able to get a white girl and not me? I am beautiful, and I am half white myself. I am descended from British aristocracy. He is descended from slaves.”

To people like Roof and Rodger and all too many others, it hardly makes a difference white woman chooses to sleep with a black man, or whether a black man rapes a white woman. Women, even those precious skinny white ones, aren’t people acting on their own desires, but property. Objects can’t consent.

There is more than a hint of schadenfreude in the lovingly-detailed rape scenarios quoted above. That’s what you get for picking HIM over ME, they seem to say. It’s inconceivable to them that a white woman would choose a black man over a white one; there must be some kind of trickery involved.

Men like Roof and Rodger and all the creepy misogynerds who hang out on pick-up artist websites are terrified of the sexual power of black men. And they should be! Not because black men are uniquely sexual, but because Roof and Rodger and company are hilariously unfuckable. For god’s sake, what kind of grown man wears a bowl cut?

Without white privilege, they are nothing. If they have to compete for mates on a level playing field free of racial prejudice, they’re doomed.

That’s what led to the massacre in Charleston. For all of Roof’s grandiose proclamations about race war and saving civilization, what it really comes down to is sexual insecurity. Dylann Storm Roof killed nine people because he was scared his dick didn’t measure up. And about that, he’s probably right.

*Note the URL of the quoted article: https://firstlook.org/theintercept/2015/06/18/cousin-of-charleston-suspect-says-black-man-stole-roofs-love-interest/ The editor chose a more progressive headline, but even the URL expresses the cultural attitude that a woman is a thing to be stolen.

We've Found the Perfect Gifts for Any Occasion, and They're From Pansy Ass Ceramics
Op/Ed: Tell Your Friends Who Rail Against Post-Thanksgiving Dinner Shopping to Suck on a Yam
The Ultimate A-to-Z Encyclopedia of LGBTQ Musicians and Bands, Pt. 5 (T–Z)
6 Sexy Gay Video Games Designed to Get You All Hot and Bothered
English