Written by Terri Washington on September 12, 2015
Be first to like this.

Every school student is forced to take history classes, but unfortunately for minority students, most classes are usually only about white history. Colleges usually offer a few classes that diversify history a little bit, but even then, those are specialty classes like Black Studies programs. The standard history classes still are about whites. But now, students from University College London are hoping to change that. 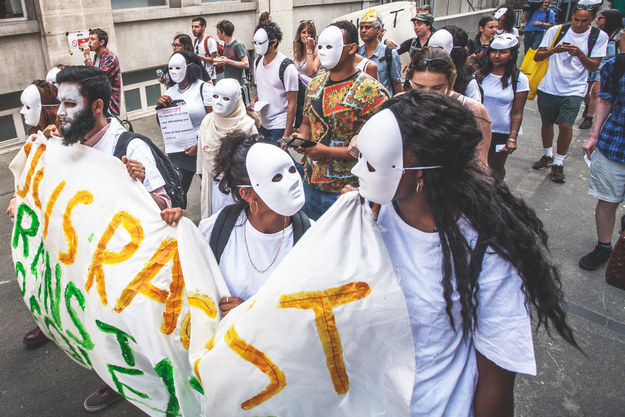 The National Union of Students (NUS) Black Students campaign organized a demonstration this past July protesting the lack of diversity in their academics. The group has organized numerous demonstrations, events and meetings around the university in hopes that they will be taken seriously and something will soon change.

“Black thought is either omitted or misrepresented,” NUS Black Students officer Malia Bouattia commented in an interview with Buzzfeed News, “We have courses that erase the historical contributions of 80% of the world’s people in favor of European thinkers and theories, while attempts at ‘diversification’ in the curriculum are usually steeped in racism and Orientalism.”

Some of the students wore white masks over their faces and others even went as far as painting their faces white in an attempt to “whiten up” as a metaphor for the current state of the university’s diversity. The students were also protesting the fact that the amount of black professors counts for less than 0.5% of the faculty. Of the 85 black professors (out of the 18,500 professors in the UK), only 17 of them are women. Recently, the school cancelled a course which would explore the history of other races which in turn eliminated the position of a black professor.

These students are demanding courses and a faculty that represent a global university as they should. The feeling of being excluded could affect their choice to further their education. Even if history is heavy on one race of people, it doesn’t mean everyone else wasn’t there. It just means that no one acknowledged their presence — a challenge that any group of  minorities constantly have to deal with.

Loic, Who Grew Up Gay in Homophobic Cameroon, Shares 'What Pride Means to Me'
In the Late 1980s, Nintendo Revealed That Super Mario Has an Uncircumcised Penis
Scholars Now Have Strong Arguments for the Existence of Queer Vikings
A Peek Under the Towel: Inside the 500-Year History of Gay Bathhouses
English