Written by Daniel Villarreal on March 22, 2016
Be first to like this.

In the battle for transgender equality, there’s a long and well-documented history of conservative politicians using the bogeyman of transgender people sexually assaulting women and kids as a way to scare voters into opposing “public accommodation laws”; that is, laws granting trans people equal access to things like public transit, hospitals, hotels, restaurants, locker rooms, and bathrooms.

Even though such an assault has literally never ever happened ever, this year alone conservative lawmakers in Canada, Florida, Kentucky and Texas have all proposed legislation that’d make it a crime for transgender people to use the bathroom of their self-assigned gender. Such laws leave trans people with a dangerous choice: use their preferred toilet and risk arrest, or use the toilet matching their birth gender and risk harassment or assault.

Instead of pleading for basic humanity (like usual), trans activists Brae Carnes and Michael C. Hughes have been promoting a Twitter photo campaign that shows just how ridiculous the laws are. Using the hashtags #WeJustNeedToPee, #OccuPotty, and #PlettPutMeHere (a reference to anti-trans Canadian Senator Don Plett), they and other trans people are illustrating why transwomen don’t belong in the men’s room and transmen don’t belong in the women’s room.

Do conservative politicians really want to force women and kids to pee in front of bearish men? If so, they’re seeming to support the very thing they claim to oppose.

Hey @TexasGOP, u’ve filed 4 bills to make this law. R u sure this is what u want? #wejustneedtopee #TransLivesMatter pic.twitter.com/S0qAkfTUoz

#HB583 in FL is a mean-spirited attack on the dignity of #trans people. Speak out: http://t.co/l0lQswiicm. pic.twitter.com/7cCsiyhILw

Do you think she would be safe in the men’s bathroom? #occupotty #transgender #TransLivesMatter #glaad pic.twitter.com/PLrUKX3H2y 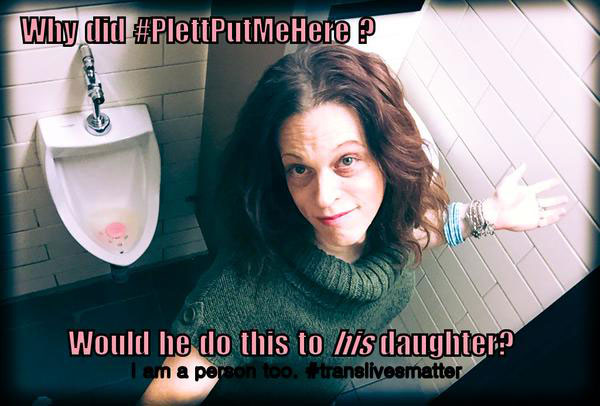 The two main reasons a transgender person may be in the restroom: #1 Occasionally #2. #WeJustNeedToPee

#occupotty: because only Republicans fantasize about what else could happen in bathrooms. Larry Craig, anyone?