Whether you need a trans character to teach someone about masculinity or just to make your audience feel weird about genitalia, Trannybot 5000 is the answer to all of your casting needs!

No, that’s not just a needlessly offensive advertising tagline, it’s the satirical salespitch for Trannybot 5000, a low-fi film short recently released by trans filmmaker April Anderson. With a $10 budget and some help from the Trans Oral History Project, Anderson made the NSFW and potentially offensive video as a response to how trans women are portrayed in popular culture by cisgender actors and creators (that is, by people whose gender and sex-at-birth are the same).

“In an ideal world, real-life trans women would always play roles based upon them,” says the announcer in Trannybot 5000. “However, in our world, trans women are weird, and often have ideas that complicate a shoot.”

So instead of casting actual trans women in trans roles, Anderson says, Hollywood casts cisgender actors in transgender roles and end up totally missing the point. Anderson calls out Arcade Fire’s “We Exist” video, the film Dallas Buyers Club and the Amazon Prime series Transparent and others as examples of this exact behavior.

As a result, we get trans friends who die (but not before teaching straights about themselves) and psychos who kill straights (because they’re crazy), but nothing involving the actual trans experience — sorry, but that’s just the biz!

The short’s outlook is pretty satirical. So I sat down with the filmmaker to talk more about the video, the problem of poor representation, and what to do about it.

Unicorn Booty: What was the process of making Trannybot 5000?

April Anderson: It actually started life a few months ago as a script called “1-800-DIAL-A-TRANNY”, the idea being a service that would supply homeless trans girls to productions in need of actresses. I tinkered with that for a little while, but no matter what I did, it seemed to be lacking something. Finally, one night, I was staring at the script and wracking my brain for something that would bring it all together and I asked myself sarcastically, “What can I do, put a robot in there?”

Spoiler: I put a robot in there.

And after I did, I felt that it worked really well as a metaphor for the kinds of roles trans people and other marginalized groups play in productions like Dallas Buyers Club. It’s exceedingly rare that we’re presented as real, fleshed-out characters in our own right; we’re only there to hit a few marks, make a middle-class white audience feel better about themselves, then shuffle off to limbo.

Last year, Dallas Buyers Club, Arcade Fire’s “We Exist” video and Transparent were all released within a relatively short span. In each case, trans women very patiently explained what we found offensive about these representations and in each case, our complaints were met with a self-righteous shrug. Like, how dare we show ingratitude when cis people have finally deigned to acknowledge us as something akin to human, you know?

So, I wanted to make something that would serve as a rebuttal to that shrug; something that would address the commoditization of our experiences and how they’ve been packaged to a cis audience. In all of these cases, the trans characters basically serve as laxatives for a guilty liberal digestion, and it’s tiresome.

UB: Have you received any pushback from it?

Honestly, I expected more pushback than I’ve gotten, just because of the title. But so far, the response has been overwhelmingly positive. I’ve received a grand total of one complaint, from somebody who I think mistook the film as being the product of cis creators. Besides that, people love it.

UB: Is it even possible for a cisgender creator to address trans issues in a respectful way?

I don’t think it’s impossible, but for the most part, cis ideas about the trans experience are formed by the exact tropes we find repugnant. Most of them have never knowingly met a trans person or interacted with them in any meaningful way, so they fill in the gaps with Transamerica or something equally dreadful. So, I think it would be extremely difficult for a cis creator to shed those influences, or at least learn to separate them from reality.

UB: What would you say is worse for the trans community — cisgender creators trying to tell trans stories, or trans invisibility in media?

AA: I’d say that they’re essentially the same thing – cis creators invariably wind up telling their stories, not ours. If you’re reducing me to a prop, you’ve functionally erased and replaced me with your idea of what I should be.

UB: What is the problem with cisgender actors playing trans roles (or perhaps, vice versa)?

AA: It’s not just one problem – it’s a whole ball of wadded up dilemmas. First, there’s the fact that it’s as hard for a trans actor to find work as it is for the rest of us; every cis actor cast has essentially taken food off a trans person’s plate. Most of us, especially trans women, have been passed over for jobs or outright fired for being trans, so it strikes a very personal chord with us.

Second, these productions bank on the publicity value of trans material, and their release is always accompanied by a spiel on how close the creators hold trans issues to their heart. But by casting a cis actor to play these roles – and employing majority cis staffs to write them – they reveal just how shallow their commitment actually is. It shows that they only consider us to be a marketable gimmick that they can use to separate their work from the pack.

Third, you have to realize that the earliest conceptions most trans people have of themselves come from our portrayals in the media, and how much damage those representations can do. I don’t think there’s a trans woman alive who didn’t worry about being seen as a boy in a dress before she transitioned; I think the majority had to move past seeing themselves the same way. A large part of that comes from the process of scouring the media and finding that message reflected in the casting of trans roles.

We’re not the only ones who receive that message, either. It plays a huge role in how cis people see us; that basic image of a man in a dress is a vital part of all the inbuilt transmisogyny in our culture. So, when we see a cis man claiming to represent us, it reinforces a number of harsh, ugly obstacles that we’ve either had to overcome or are still in the process of grappling with.

UB: In something like Transparent, where the trans character (played by Jeffrey Tambor) is just starting transition, who would you prefer to see cast?

AA: You could literally pluck a random trans woman off the street and she would bring more insight to the experience of coming out and transitioning than Jeffrey Tambor ever could. And I’m pretty sure it’s legal to pluck trans women off the streets in most states, so producers can’t even use that as an excuse.

UB: As you referenced in the film, one of the standard tropes is the “trans psychopath” (i.e. Psycho/Silence of the Lambs) — do you think that’s on its way out?

AA: One would hope, but every time you think it’s dead, it rises for another go. It just popped up again in the Batgirl comic, of all places, which had previously featured a not-terrible trans supporting character courtesy of Gail Simone.

It’s one trope which I find especially galling, too, because of my personal experience: When I was a kid, I watched a Brian DePalma movie called Dressed To Kill, which was basically a Psycho retread starring Michael Caine as an explicitly transgender serial killer. In the epilogue, after they’ve carted him off to an asylum, there’s a scene where a few characters discuss the ins and outs of Hormone Replacement Therapy in explicit detail. That’s the context in which I first learned what hormones do. So, it’s a trope which I’ve nursed a grudge against, and one I hope to deconstruct further in the future.

AA: Easily the idea that by simply acknowledging our existence and not portraying us as perverts and serial killers, the media deserves our undying gratitude and anybody who’s dissatisfied with the kind of lip service we’re being paid is an easily-ignored malcontent. I’m sure it makes life easier for the rich, white, cis people in charge of these productions to listen to horrid little apologists like Calpernia Addams when they coo and purr over the minuscule amount of thought put into these portrayals, but it makes things exponentially harder for the rest of us.

UB: What can media consumers do to help fix the problem of representation, if anything?

AA: When trans people, or queer people, or people of color say a portrayal is offensive, listen to what they have to say; and if they say not to watch something, listen to that. And don’t use the public endorsement of self-loathing shills like Andrea James as an excuse for not listening to the rest of us. 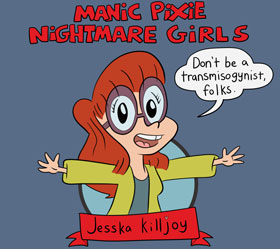 UB: Is there anything in the media landscape that gets trans issues right?

AA: Nothing mainstream. Topside Press has put out a number of books by trans women that are great, but they’re the only ones doing it in that field. Anybody who comes across a zine by Katie Zall or Emma Caterine should snatch it up. Slews and slews of bands, of course – and anybody looking for awesome trans music could do a lot worse than to check out the groups on the Trannybot soundtrack. There’s an artist named Jessica Udischas who puts out a webcomic called Manic Pixie Nightmare Girls that’s lovely. It’s all stuff you have to look for.

UB: Are you working on any other films right now?

AA: I have a few ideas in a similar vein that I’m kicking around, one of which actually involves unicorns, but those are going to take some time to set up. What I’d really like to do in the interim is shoot a series of shorter sketches – sixty to ninety seconds apiece – and release them every week or so. But I have to figure out what equipment I can lay my hands on and when before I figure that out. One way or another, there’s going to be something soon.

AA: Just this: I think a lot of trans women would love to make something like this video, but they assume that too much is stacked against them to even try. It’s impossible to blame them for that assumption, too, because they’re constantly reminded of how hard the basic act of survival is in our society.

But, like I said, this video literally cost ten dollars to make; all I had was borrowed equipment and the support of some good friends. Obviously that shows in a lot of respects, but I think it’s a quality piece of work about an important subject that a lot of people seem to have enjoyed. So, if there’s anything I’d like people to take away from the video, it’s the idea that it’s totally within their capability to make something like this. And if everybody who wants to tries, maybe there won’t be any more problems with trans representation left to address.

Matt Keeley fancies himself a reporter who thinks too much about media.  More of his ramblings can be found at Kittysneezes.com and on Twitter @kittysneezes.

Here's What 15 Celebrities Have Said in Support of Open Relationships and Non-Monogamy
The Next Time You Crave Chicken, Remember That Chick-fil-A Is Still Very Much Anti-Gay
13 Films That Say 'Screw Romance' and Stab Love in the Eye Then Twist
Can 'Hogwarts Legacy' Actually Distance Itself From JK Rowling's Transphobic Ideology?
English