Transgender Woman Beaten Into A Seizure At McDonald’s

22-year-old Chrissy Lee Polis was simply trying to use the restroom at a Baltimore area McDonald’s when she was violently attacked by two teenage girls. McDonald’s employees did nothing to stop the attack on her – nothing except film the violent assault – and after being being kicked in the head and dragged across the restaurant floor by her hair for several minutes, Polis began to seize.

Three minutes of the brutal attack were caught on video by a McDonald’s employee, ironically making him an accessory to the crime. McDonald’s employees can be seen in the video laughing at the attack, and the only person that comes to Polis’s defense is an elderly woman who attempted to protect the victim before being punched and kicked herself.

The video is extremely violent and difficult to watch.

With the exception of the woman who came to Polis’ aid, everyone else in the video may be considered an accessory to the crimes committed by the attackers for either filming or simply watching the attack for several minutes. People can even be seen simply stepping over Polis’ body and looking down at her without offering assistance as she goes into a seizure.

“This latest attack highlights the extraordinary level of violence and brutality that transgender people face in their everyday lives,” Michael Silverman, Executive Director of the Transgender Legal Defense and Education Fund told The New Civil Rights Movement. “We call upon the authorities to fully investigate this attack as a hate crime, and hope that the victim will receive some measure of justice.

On average, a transgender person is murdered every month in the United States. This violence is intolerable. We all must redouble our efforts to stop hate-motivated violence directed at transgender people.”

McDonald’s released a statement condemning the attack. “We are shocked by the video from a Baltimore franchised restaurant showing an assault. This incident is unacceptable, disturbing and troubling. Nothing is more important than the safety of our customers and employees in our restaurants. We are working with the franchisee and the local authorities to investigate this matter.”

While McDonald’s was busy speaking out against the attack in their restaurant, Vernon Hackett, the McD’s employee who filmed the assault posted these ignorant and offensive comments on his Facebook page. 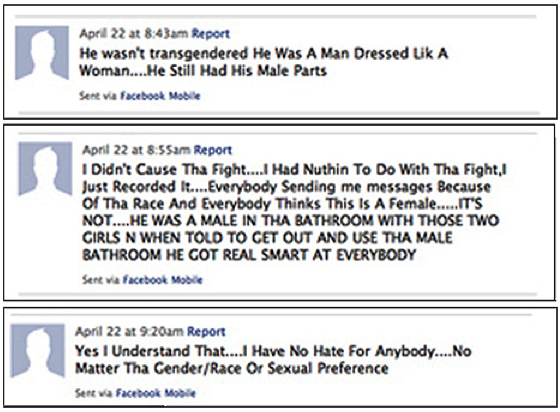 It’s worth noting that just last week the Maryland Senate killed the Gender Identity Non-Discrimination Bill, which would have offered protections to transgender Marylanders in housing, employment and banking. Though the bill wouldn’t have provided additional charges against the attackers in this case, the attack is an obvious hate crime and will be prosecuted as such, Maryland’s refusal to pass the bill sends a powerful message that transgender Maryland residents do not deserve protection under the law.

Statistically speaking, a transgender person is murdered every month in the United States.

5 Projects That Made a Star of Tom Holland, the Guy We're Swooning Over This Week
ACT UP Was Unofficially Founded 35 Years Ago, Changing the Face of Queer Activism
Understanding the Quiet Queer Activism of Mister Rogers
English