When ex-hedge funder Turing Pharmaceuticals CEO Martin “Pharma Bro” Shkreli raised the price of Daraprim, a drug used to treat patients with malaria and AIDS, from $13 per pill to $750 per pill, the world was outraged. Major news outlets reported the story with disgust. Millions of Americans called for Shkreli’s tiny, misshapen head.

Shkreli tried to defend his decision, saying, “If there was a company that was selling an Aston Martin at the price of a bicycle, and we buy that company and we ask to charge Toyota prices, I don’t think that that should be a crime,” apparently unaware of the difference between a luxury item and a medication the World Health Organization considers essential for preventing people from dying of toxoplasmosis.

Hillary Clinton denounced Shkreli, demanding that he lower the price of the drug. The Democratic presidential candidate also published a tweet about Big Pharma’s price-gouging; the tweet caused a dip in biotech stocks.

Price gouging like this in the specialty drug market is outrageous. Tomorrow I’ll lay out a plan to take it on. -H https://t.co/9Z0Aw7aI6h

Someone doxed Shkreli, posting his phone number and address on Twitter.

Even other pharmaceutical companies attempted to distance themselves from him:

.@TuringPharma does not represent the values of @PhRMA member companies.

Rage toward Shkreli’s heinous greed spread across the globe. The Taiwanese animators weighed in on the story in their characteristic offbeat way, calling him a douchebag and making fun of his height.

“Maybe he should design a drug to make people actually like him,” the Taiwanese animators said, showing a woman swallowing a pill that causes her to fall in love with Shkreli and then turn into the Incredible Hulk to rip the pint-sized pill peddler apart. That’s a pretty good idea, because Shkreli has recently found out that his ill-gotten gold isn’t really helping him with the ladies. A while ago, he had to take down his OKCupid profile, presumably to protect himself from angry messages from other OKCupid users.

(Seriously, Shkreli? OKCupid? You couldn’t shell out $31.99 for a Match.com account? That’s less than a twenty-third of the cost of a single dose of Daraprim, you cheap, cheap asshole.) Still, Shkreli reached out to young woman named Eve Peyser on Tindr, but alas, she did not submit to his charms. Before he blocked or unmatched her, however, she engaged him in a brief conversation, which she posted on Twitter.

so i matched with the aids drug dude on tinder… pic.twitter.com/NXFKEKIvTX 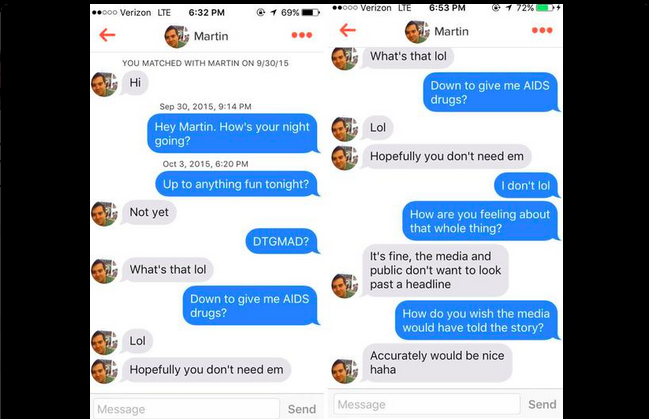 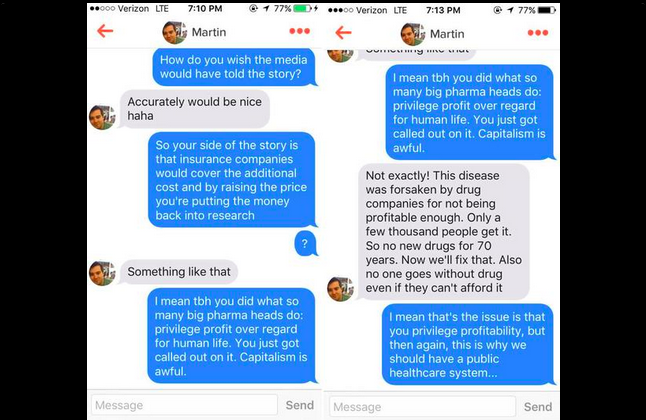 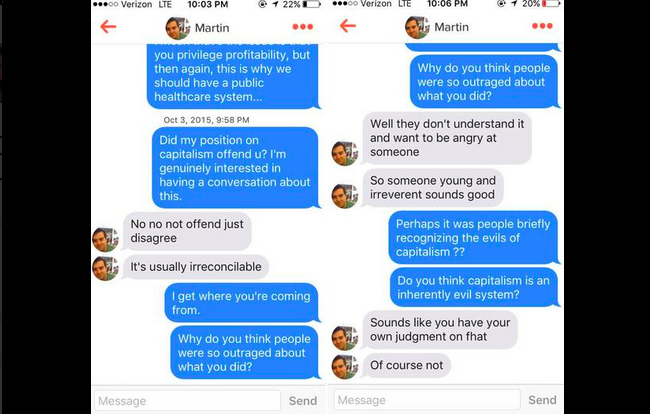 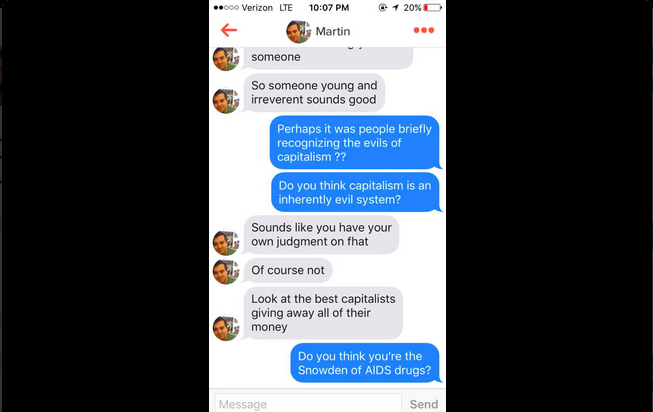 Peyser negged Shkreli pretty hard by discussing the evils of capitalism, but when she sarcastically asked him if he thought he was “the Snowden of AIDS drugs,” he ceased communications.

Peyser later wrote, “I would never go out with Martin Shkreli; I prefer to date men who have demonstrated the capacity to feel empathy. I also don’t think Martin is the Edward Snowden of AIDS drugs, though I was wondering if Shkreli thought of himself that way.”

At any rate, Katie said no. Years later, when Shkreli’s repugnant price-gouging gained him international infamy, Katie took screenshots of the conversation and generously shared them with the world on her blog: 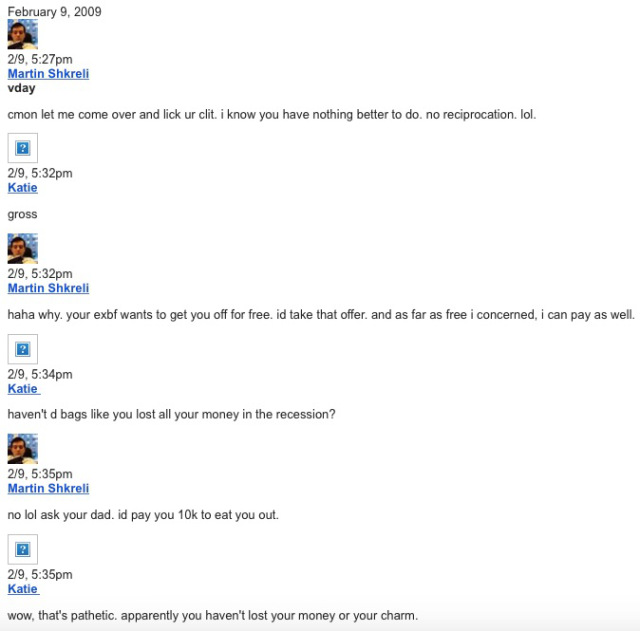 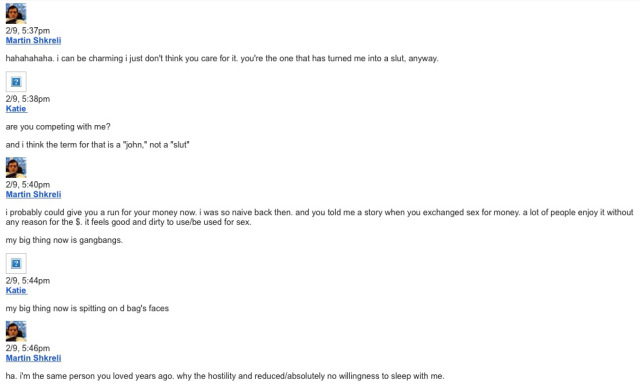 More recently, Shkreli donated $2,700 to the Bernie Sanders presidential campaign (presumably without the offer of oral sex). Team Sanders rejected the dirty money, regifting it to a health clinic in Washington and calling Shkreli “the poster boy for drug company greed.” It’s unclear whether Shkreli truly supports Sanders, or whether he was just trying to get back at Hillary Clinton.

Now that Shkreli has learned that both he and his money are unwanted and unloved, the avaricious Oompa-Loompa has taken to whining about how misunderstood he is on Twitter. On October 9 he wrote,

Greed? I don’t own a car–I don’t even have a driver’s license. Our company is not profitable. My salary is $0. I give millions to charity.

Another cartoonist, Brian McFadden, jumped in with a little swipe at Shkreli:

Zing! It looks like Shkreli didn’t pick up on the joke, for he only wrote:

Then, a magical sequence of events took place.

First, Bors paid tribute to Shkreli in the medium of visual art: 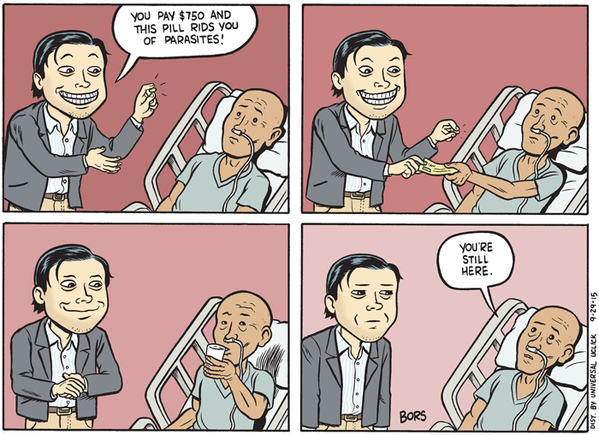 Evidently, the miasma of darkness that shrouds Shkreli at all times prevented him from noticing that shade had just been thrown upon him, for he responded:

@MartinShkreli Would you like to buy the original for your wall?

@MattBors sure!!! Especially if you donate the proceeds to an AIDS charity. — Martin Shkreli (@MartinShkreli) October 9, 2015

In response, Shkreli generously offered to ask someone else to donate to charity (preferably one that helps AIDS victims pay for Daraprim):

@MattBors sure!!! Especially if you donate the proceeds to an AIDS charity.

To which Bors gave the most perfect response of all time:

@MartinShkreli I absolutely will. I typically sell them for $160, but I’ve raised this one to $750. You can paypal me at comics@mattbors.com — Matt Bors (@MattBors) October 9, 2015

Shkreli did not respond. The next day, Bors reminded him of his pledge:

@MartinShkreli You should follow through here and I’ll give the money to and AIDS charity like you suggested.

Apparently the 24-hour interim had given Shkreli enough time to get the joke:

@MattBors seems like you’re more interested in making a joke than having an interest in charity. i would have bought it for $50k. — Martin Shkreli (@MartinShkreli) October 10, 2015

@MartinShkreli Seems like you’re more interested in telling me how much you’d donate than doing so. I’lll sell you the original for $50k.

Another combatant entered the fray:

@MattBors @MartinShkreli I’ll buy original for $10k, if you donate 90% to the toxo community (not AIDS) & debate me right here about Martin — kdawg (@ohnoyoudidnt1) October 10, 2015

This dude did indeed just paypal me ten grand.

Who is this mysterious benefactor? His Twitter profile doesn’t list any age, but his Tweets go back no further than October 10th, and all of them are angry comments in support of Martin Shkreli. The user follows a few accounts involved in biotechnology and finance—two industries in which Shkreli has a career history. The amount @ohnoyoudidnt1 offered Bors for a debate—$10,000—is exactly the same price Shkreli offered his ex-girlfriend for oral sex a few years before. The account @ohnoyoudidnt1 looks like a clumsy attempt at sockpuppeting. In other words, Shkreli may have created a fake Twitter account to speak in his favor.

Later, Shkreli feigned ignorance of the exchange between Bors and the mysterious benefactor:

It’s unlikely that Shkreli would have been unaware of the conversation; Bors and the mysterious rich guy who is definitely not Martin Shkreli would have appeared in Pharma Bro’s Twitter mentions. Shkreli then weighed in on the debate:

@MattBors @steve_lieber my official comment is: “fuck your stupid cartoon.”

What have we learned from this?

We’ve learned that money can’t buy a thicker skin or, at least in this particular instance, oral sex from one’s ex-girlfriend. We’ve learned that Hillary Clinton has some sort of supernatural power to destroy biotech profits with just a few words, which to be honest makes me really want to vote for her.

We’ve also learned that if you insult Martin Shkreli enough, he—excuse me—a strange, wealthy internet person who is totally not him, you guys—will give you $10,000.

So if you find yourself stricken with AIDS or malaria, you now have an affordable treatment plan: Photoshop a picture of Martin Shkreli’s face onto the goatse image and Tweet it to him, and you might be able to pay for thirteen doses of Daraprim.

Here's Why We Won't See Meaningful LGBT Representation in a Franchise Blockbuster Anytime Soon
There’s No Easy Path to Asylum, But It’s Even More Difficult for Queer People
Under the Cover of Night: 10 of America's Most Famous Gay Cruising Spots, Past and Present
If You're Drinking to Overcome Social Anxiety, Try These 3 Tips From Our Psychologist
English