“Trust Him?”: Why Are the Images Debating PrEP Use So Consistently Shitty?

Written by Topher Williams on September 16, 2015
Be first to like this.

We’re proud to announce that this coverage has won the 2016 Excellence in HIV/AIDS Coverage Award from the National Lesbian & Gay Journalists Association!

This is the first in a three-part series about the art and advertising in HIV-awareness campaigns. Make sure to read the second part and third parts.

Riding the PrEP Effect: Why is it so hard to imagine safer sex these days?

Last week, a group of researchers tracking a multi-year study of gay and bisexual male Truvada users in San Francisco reported no new HIV infections among participants. The lead author of the report called the study the first to understand “the use of PrEP (pre-exposure prophylaxis) in a real-world setting,” although its findings paint a cautiously optimistic picture. 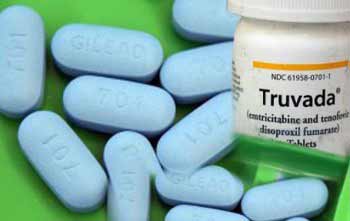 On one hand, the research suggests that medications like Truvada might have real potential as a public health initiative against HIV. Scientists were surprised that condom usage stayed the same for a majority of participants but, 50 percent of the participants also contracted other STIs and the study didn’t track how faithfully participants stayed on treatment. Other, more controlled studies linked higher seroconversion rates to people just not taking their pills.

More important than taking a side is the actual presence of a debate and how HIV/AIDS service organizations are responding to — and perhaps shaping — the ways we respond in it. This three-part article will unpack some recent campaigns addressing sexual responsibility in the age of PrEP, and look at some old-school activist images that advocated safe (but hot) sex.

One might expect the images to depict the biggest stakeholders in the PrEP debate. But after seeing what’s out there, you might wonder whether you’d want to be part of the picture at all.

Part One: Enjoy the Silence

Earlier this summer, the AIDS Healthcare Foundation (AHF) launched a controversial new public awareness campaign addressing what the organization regards as the link between HIV and lying between the sheets. Billboards which depict a well-groomed, yet distraught couple in bed the morning after something obviously went down have already appeared in Los Angeles. More are slated to be put up in places as far-flung as Columbus, Ohio and Broward County, Florida. 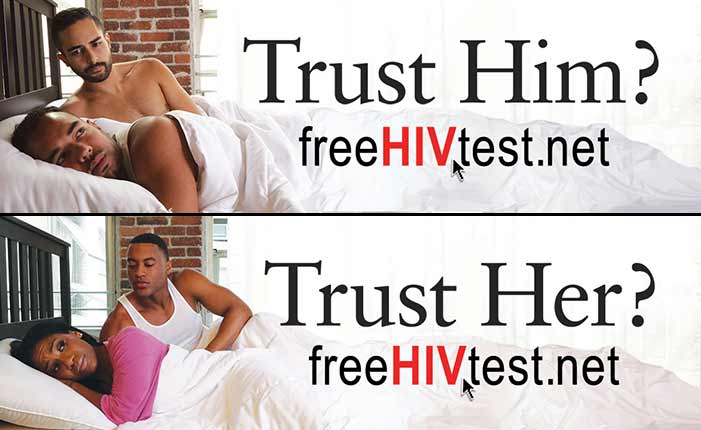 These billboards represent the newest battleground to emerge in the fight over what safer sex advocacy looks like in 2015. What has raised the ire of numerous HIV activists are the words “Trust Him?” (or, in the case of some billboards, “Trust Her?”) floating to the right of the unhappy couple in that gorgeous early morning light.

Tyler Curry, the senior editor of HIV Equal Online, called it a “stigmatic view of sex and trust” that is “reductive in personal responsibility.” He criticized how the combined text and image imply that “people living with the disease are akin to criminals” who must lie in order to get laid or just don’t care about their partner’s health.

It’s not difficult to see how Curry came to this conclusion. In a press release about the campaign, AHF president Michael Weinstein explains its underlying logic through a string of curious analogies: “In today’s tabloid culture when it can seem that the game called ‘Life’ should be more appropriately titled ‘Lies,’ the old adage holds true now more than ever, ‘It’s better to be safe than sorry.’”

Shorter Weinstein: since celebrities/politicians/porn stars glamorize infidelity, don’t assume your partner isn’t cheating on you as well. Which they probably maybe most definitely are…and, boy, have they picked up some nasty shit.

Although the “Trust Him/Her?” campaign does not explicitly mention it, a particular anxiety about Pre-Exposure Prophylaxis seems to haunt the couples on the billboard. What did that sweet charmer say about his or her status the night before? Did he assure you that he was undetectable or on Truvada? Did you trust him? the ad whispers. Do you still trust him? Fool.

Over the past few years, heated conversations about PrEP have raged in LGBT bars, queer chatrooms, advocacy blogs, and national news sources. A quick glance at the comment section of New York’s cover story on PrEP from last fall should give a sense of how polarizing the topic can be.

For some, going on a daily regimen of Truvada is seen as good public health policy, an alternative or an addition to condom usage. For others, it represents liberation from the rhetoric of fear often linked to HIV/AIDS and, perhaps, an invitation to explore that sense of freedom.

For a third group, PrEP is a confirmation of some of the worst stereotypes about gay men as promiscuous and vectors for other STIs, like syphilis and Hepatitis C. What is apparent in looking over the numerous, often nuanced responses is how deeply felt these positions are.

The AHF’s “Trust Him?” campaign seems to fall squarely into the latter camp. In the one billboard to feature a white model, a blond twink stares wide-eyed into middle distance as he clutches a (presumably allergen free) pillow. His partner, a young bearded Latino dude, is glaring at the back of his head because players only love you when they’re playing. Talk is cheap.

The swift backlash and easy mockery generated by the AHF’s latest campaign point to its dated, melodramatic imagery as much as to the ways it removes individual responsibility from the equation.  Part of being an adult should be engaging in consensual sex, which means each partner must make a series of choices leading up to the dirty deed.

In order for this campaign to work, you must believe yourself capable of being victimized in some very particular ways.

What has not been commented on much in the debates around PrEP usage (the “PrEP effect”), are the forms and images in which this debate is taking shape. One reason might be a confusion of terms: “Prophylaxis” (the last P in PrEP) just refers to the process of taking medicines prior to potential exposure or infection. Truvada is currently the only medication whose efficacy has been widely studied and approved for this kind of usage.

So what does PrEP use look like within the visual imagination of HIV/AIDS activism? I’m less interested here in how Truvada is marketed. The drug itself is neither a genericized trademark for PrEP, nor should the representation of PrEP be determined by pharmaceutical companies or market forces.

In late August, the AHF released a new campaign which appeared to signal a change of heart around PreP.  Or, at the very least, it grudgingly acknowledged that PrEP was now a part of public health debates.

The ad, which ran in LGBT newspapers and magazines in seven urban markets across the United States, from Dallas to LA to DC called for “Reaching Common Ground on PrEP.” The spill of blue pills that surround the numbered list of principles make it hard to tell who this image is really for: policymakers, doctors, everyday people…or just critics of the “Trust Him/Her?” campaign.

To be honest, it looks a lot like a Truvada ad. 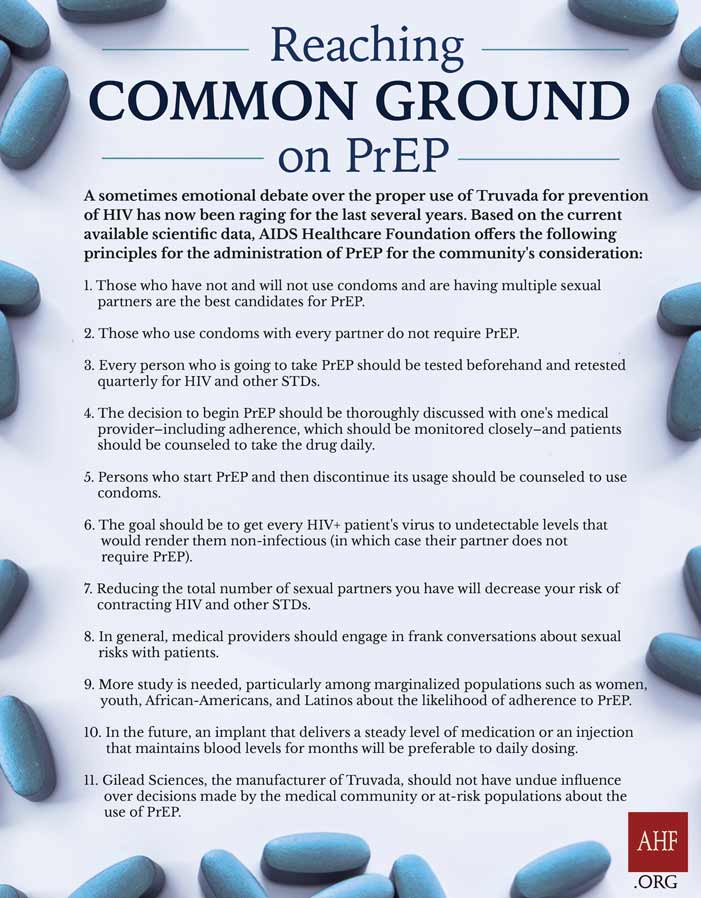 Click here for the next installment: Will this little blue pill give me great abs too? OMG! #PrEPHeroes

Help Spread the Gay Agenda With These LGBTQ Children's Books
On Reagan's Birthday, Pledge Not to Forget the AIDS Deaths His Administration Laughed Off
5 Super Queer Gifts Perfect for the LGBTQ Friends and Family on Your Holiday Shopping List
Under the Cover of Night: 10 of America's Most Famous Gay Cruising Spots, Past and Present
English