Justice was served in Denver on Friday, as two policeman were fired for beating a gay man back in 2009 and then lying about it. The beating was caught on a surveillance camera, so the lies were eventually discovered. We’re not sure why these cops thought they could get away with it – oh wait, because cops normally get away with all kinds of good ol’ boy shit – but we are pleased as punch that they are no longer “serving” the Denver community. 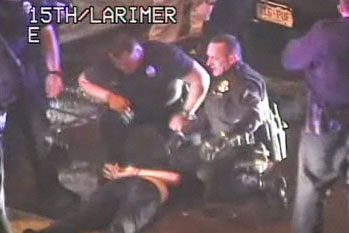 The officers, Devin Sparks and Randy, Murr did “immeasurable harm” to the department, according to Denver’s Manager of Safety Charles Garcia, a public servant who oversees Denver’s police, sheriff and fire departments. “We are entrusted with the public’s confidence and that requires incorruptible character, fair treatment of all people and truthfulness in all of our officers,” Garcia said.

The incident occurred in April 2009, after Michael DeHerrera and his partner Shawn Johnson were detained by the officers after they were ejected from a bar in downtown Denver. The officers noted in their report that both men were belligerent, requiring force to subdue them. However, a city surveillance camera showed DeHerrera on his cell phone when he was suddenly thrown to the ground by Officer Sparks, who then beat him with a metal rod wrapped in leather known as a sap.

Denver’s interim mayor, Bill Vidal, said that this was a fitting conclusion to a tragic and unnecessary event. “The lesson to be learned by all of us as public servants is that we must always act in a manner that we would be proud of, no matter who is watching,” Vidal said.

The lesson learned to us here at Unicorn Booty is that the prevalence of video cameras – Big Brother is everywhere – means that speaking truth to power is easier than ever.

More about the incident from a Good Morning America report:

It's Been 243 Years Since the First Man Was Thrown Out of the Army for Being Gay
Just a Little Snip? 10 Things You Probably Didn't Know About Circumcision
Here's What Science Has to Show for a Half-Century of Searching for Homosexuality's Causes
6 Secrets Queer Black Men Wish Gay Society Realized
English