I Slept With Every U.S. President (Except Trump, Ew!), and Here Are the Top 10

Written by Devin Bannon on February 15, 2015
Be first to like this.

As of this morning, I have now slept with all 43 presidents in US History.

It was an experiment. I wanted to see if performance in the bedroom had any correlation with performance as Commander in Chief. It’s the least I could do for my country.

To seek them out, I did what any gay boy looking for closeted politicians does…

I went to DC and went on Tinder. I swiped and swiped for days… Nothing.

Finally, a twinky congressional page I’d been commiseration-flirting with on the side informed me I was wasting my time. He’d been after the same thing at one point, I guess.

Apparently, in the last week all 43 Presidents had all upgraded to The League, the new dating app for “elites only”. Already over that noise, the twinknocrat happily traded me his spare “ticket” (what rich people call mobile app invitations) for a $75 Zara gift card, and that was that. I was in.

Two minutes of customization later, now a proud profile-wielding member of The League, my search pool narrowed to about 20,000, which is a much more manageable swipe pool. It didn’t take me long to find them. One by one, their faces slid onto my screen. One by one, we matched. Guys are easy. Messages began to pour in.

Okay, stop. For all you who think I’m some kind of freak, listen: Obviously you have never used this app before. Understandable. It’s pretty exclusive.

Basically, it shows each President the age he was on the night of his inauguration.

Anyway, where was I? Oh yes. The League.

Within hours, I had them all as contacts. Boom. Not even a thing.

Before going out with my first date, however, I had to strategize.

I needed to come up with my study.

Of course, a study like this wouldn’t be scientific without numbers, so I decided to rank them in the five categories that seemed most important to both presidency and sex:

You can see the scoring chart for all the information I gathered on the last page of this article.

Now I know what you’re thinking: You’re biased towards presidents of the 20th century, because you’re more familiar with them, and they resemble you more closely in style of dress and manner of speech. You like them because you can relate to them!

To this I say: Dead wrong.

Listen. I slept with all 43 of them – I even slept with Grover Cleveland TWICE just for accuracy’s sake – and I really gave them all a fair shake. If I must defend myself, let me make a broad but true generalization based on my experience…

Sorry, but it’s true. They’re more respectful of their partners, they’re more interested in having fun in the bedroom, and they’re taking way better care of themselves. Physically, modern presidents are practically athletic when compared to their predecessors. And when it comes to, ahem, hygiene, let’s just say I have a newfound sympathy for the first ladies of yesteryear.

However, that does NOT mean some of those early chiefs were not straight up foxy. No matter how trends change, sex appeal, like style, is timeless.

While I could critique each beau in detail, many of them were so frankly disappointing (some I’d call downright ghastly), speaking my mind on some of these liaisons would be seen by some as wildly unpatriotic. Out of respect for the presidents who left me less than wowed, I will highlight my ten top-scoring chiefs. For the rest, I’ll let the numbers speak for themselves. (Except for Nixon. That dude was a fucking douche.). 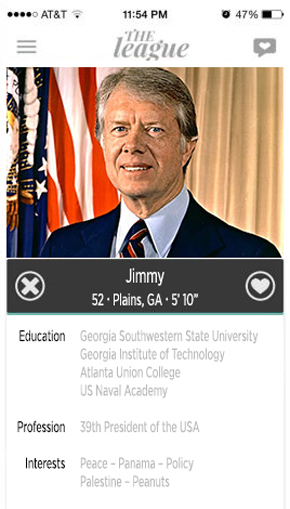 DATE REVIEW: My, he’s an eager beaver. Easily the most enthusiastic of my dates, energy and education were clearly his strong suits: he knew what he wanted and went after it with gusto. His talkative nature, while eloquent at the dinner table, verged on peanut gallery level in the bedroom. What to say when someone says he’s going to dive into your “love canal”?

SIGNATURE MOVE: “Strategic Arms Limitation” – He’ll tie your hands behind your back, though quite gently, and only with permission.

BOTTOM LINE: Brilliant, but any bedroom time that feels like a hostage situation is to be avoided. 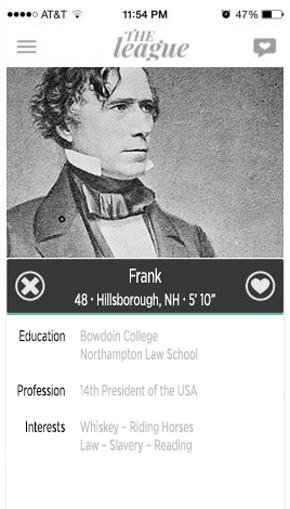 DATE REVIEW: This dashing military man was full of fire. After some awkward table talk (let’s just say we didn’t see eye to eye on “human rights”), it was a welcome change of pace to move to the bedroom. Pierce tore into me wildly like a boy who isn’t eating enough at home, if you catch my drift. Unfortunately, he drank with gusto too, which led to fainting. Sigh.

SIGNATURE MOVE: “The Union Divider” – He enjoys spreading your legs as far apart as they can go, almost to the breaking point…

BOTTOM LINE: Passion is his strength and weakness. Fun for a night, but I could see it turning ugly… 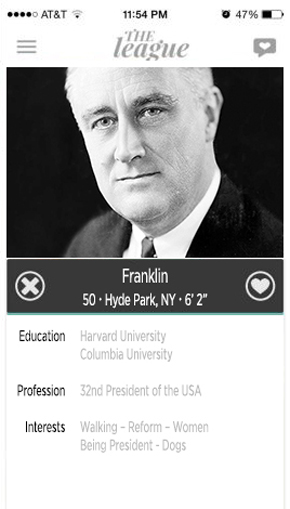 DATE REVIEW: At first I was unsure, but FDR was determined to win me over. He’s very receptive, and at every indication of disinterest, he always seemed to find a way to take the reigns and reel me back in. So to speak. Yes, it’s true: he is confined to a wheelchair. But the good news is it turns out he’s not 100% paralyzed from the waist down. Not where it counts.

SIGNATURE MOVE: “The Rainbow Five” – Foreplay is his forte. With just one hand he’ll open you up and make you see stars.

BOTTOM LINE: While he might not be the top or most obvious choice, I must salute his determination. 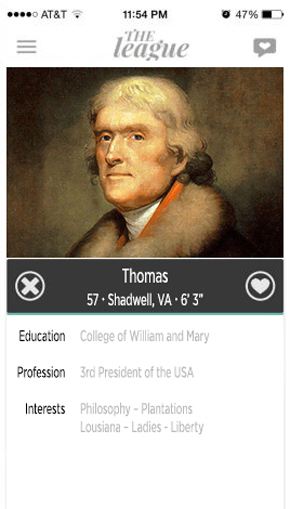 DATE REVIEW: Genius, revolutionary… slave rapist? We touched on all three topics, and for what it’s worth, he seems to have deep regrets about the third (no great explanation for the past, but he said he’s working on it, and is in a happy relationship with a black lady… Yikes.). Anyway, the charm of legend is real, and there never was a bigger bedroom surprise…

SIGNATURE MOVE: “The Deprivation of Independence” – Dude’s a freaky sub. He wanted me to tie him up, spank him, and ridicule him. So I did.

BOTTOM LINE: Probably the wildest night with the greatest smash of expectations. Zero need to repeat. 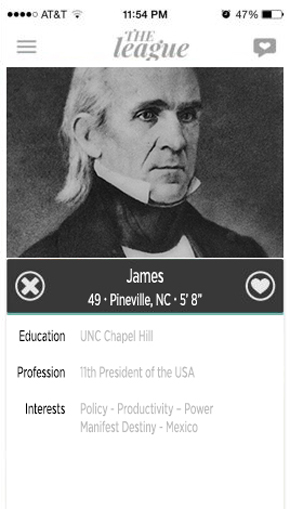 DATE REVIEW: This dude is a total peacock. Easily one of the handsomest and most fashionable of the lot, he’s also completely in adoration of himself, but I guess that goes with the territory. After an hour, I got pretty bored hearing about all the territories he conquered for us (Hey West Coast!) and the size of his plantation (yikes)… so I just said, “Wanna fuck?”

SIGNATURE MOVE: “Manifest This” – You know that scene in American Psycho where he’s checking himself out in the mirror while he’s fucking the girl? It was a lot like that except with a wig and boots.

BOTTOM LINE: Definitely worth a “polk,” but after an evening of hearing him sing his own praises, one might be glad that dates, like presidencies, have term limits. 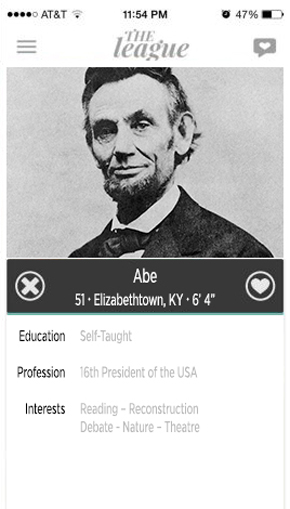 DATE REVIEW: The word “stoic” doesn’t do Lincoln justice. Not a great “night on the town” kind of guy. All evening he seemed distant and disinterested. Then we went back to the hotel room. Wow. It was instantly clear this wasn’t his first time. And sure, maybe he’s not the most photogenic, but… woof. Dude is strong, dirty, rough, and he knows how to fuck.

BOTTOM LINE: Impossible to read, but does it matter? Who needs to talk when you can fuck like that? 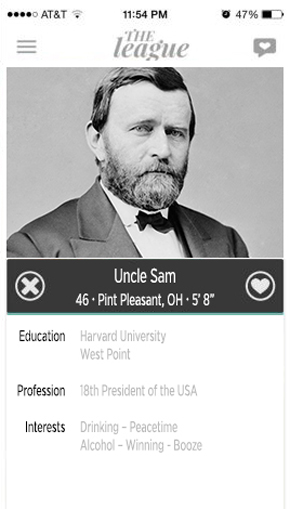 DATE REVIEW: All evening, Grant was a true gentleman, the very image of chivalry and class, though he certainly likes his liquor. As the drinks kept coming, the fire in the eyes started to glow brighter. As soon as the bedroom door closed, the true General came out in all his glory, ready to take charge and claim his prize. Crazy, epic sex. Afterwards? Total cuddler.

SIGNATURE MOVE: “Swing Around the Circle” – Grant is a skillful top, and he loves to take his time readying his target with his tongue.

BOTTOM LINE: He’s a boozehound with a wild temper. But there’s no denying he is a stone cold fox. 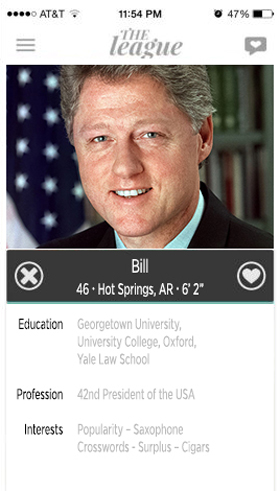 DATE REVIEW: Don’t tell Hillary. Or maybe she’s used to it? Anyway, he’s everything they say. He’s funny. He’s charming. He’s seductive. He listens. He says all the right things. And then, before you know it, you’re under his spell. And he still looks pretty great for his age. I mean, he’s still The Big Dog, only now he’s got a more Operation Silver Fox flair.

BOTTOM LINE: Happy I got to hit it. Somehow it seems like marrying him would be the bigger feat. 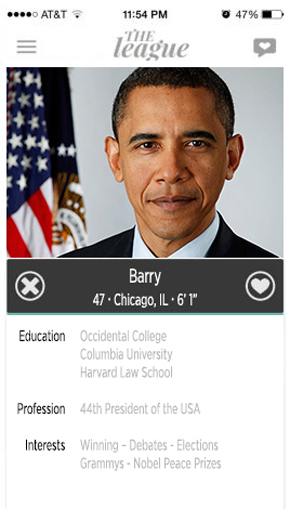 DATE REVIEW: That smile could melt anyone. He’s sexy when he’s focused, and he’s extra sexy when that focus is on you. He’s kind of a closet old-fashioned romantic, and yet he’s so up to date in the bedroom. Highly skilled, impressively endowed, and he loves to please. Definitely the most GGG of the bunch. To my every wild desire, he said, “Yes, we can.”

SIGNATURE MOVE: “The Birth Certificate” – He loves to make you get down on your knees and beg to see it before whipping it out.

BOTTOM LINE: He’s a winner in almost every way. He knows it. But perfection can get a bit robotic… 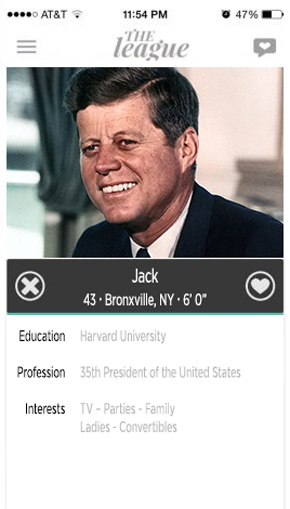 DATE REVIEW: My oh my, the legends are true. He’s a perfect date. He’s sexy. He’s confident. He’s fun. He can sail and play cards and smoke and drink and show up the next day like a boss. Our session included wrestling, laughing, and lots of sexy exploration. Sure, he might make messes and promises he can’t keep, but we all knew he was a playboy, didn’t we?

SIGNATURE MOVE: “Cooling the Missiles” – Kennedy is a total edger. He loves to get both parties to the point of explosion and stop.

BOTTOM LINE: Though you have to know you’re sharing him with the class, he’s just the most fun of all.

So, what do I conclude, you ask, after having done the whole team, all 43 Commanders in Chief from Washington to Obama, the Hall of Fame of American leadership?

Do better lovers make better presidents? Let me put it this way: When the scale goes from Nixon on the bottom to Kennedy on top… you do the math. 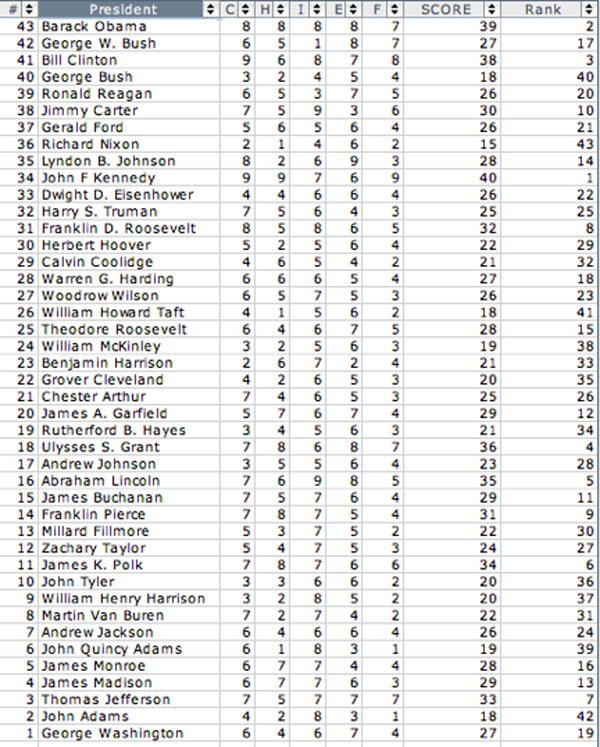 (This story was originally published on March 2, 2015)

Under the Cover of Night: 10 of America's Most Famous Gay Cruising Spots, Past and Present
The Next Time You Crave Chicken, Remember That Chick-fil-A Is Still Very Much Anti-Gay
The Hijra Are a Recognized Third Gender in Hindu Society
We're Rating All the Big 2021 Pride Collections
English