Written by Kevin Farrell on January 27, 2011
Be first to like this.

A Uganda gay rights activist is dead, following Rolling Stone (No affiliation to the U.S. publication) magazine’s controversial “Hang The Gays” witch hunt. The magazine spent much of last year publishing the names, addresses, and pictures of over a hundred Ugandans accused of being homosexuals. These cover stories ran with the tagline “Hang Them”.

The African nation’s Supreme Court eventually stepped in and barred the magazine from publishing any more personal information about Ugandan citizens, but the damage had already been done.

David Kato, an LGBT activist in Kampala who was revealed to be gay in Rolling Stone’s coverage, is dead. His body was found bludgeoned to death by a neighbor earlier today. His home appears to have been ransacked – clothing and money were stolen. Uganda has lost a hero akin to Harvey Milk, and has created a lightning rod akin to Matthew Shephard.

Kato told CNN last year that he feared for his life after the list was released. His lawyer said he had informed authorities in Mukono, the town where he lived, of his fears.

“The villagers want to set my house ablaze,” he told CNN at the time. “They want to burn my house. … (They say,) ‘Can you go away before my house is burned?’” 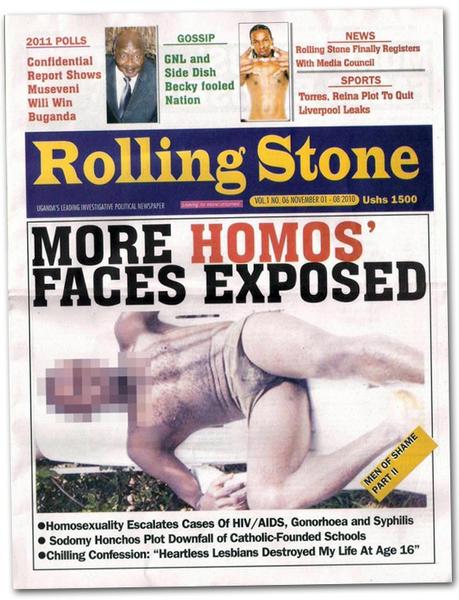 Kato himself was one of two plaintiffs in the suit against Rolling Stone that led to the magazine being banned from publishing personal information about homosexuals. His death has sent shockwaves across the globe.

“When we called for hanging of gay people, we meant … after they have gone through the legal process,” said Giles Muhame. “I did not call for them to be killed in cold blood like he was.”

That magazine that called for the killings of gays claiming it doesn’t approve of how the gays were killed in an attempt to divert responsibility for their actions? Completely unacceptable. And a total crock. I haven’t a clue about the Ugandan legal system, but I hope that this magazine has the pants sued off of it. Rolling Stone Magazine should be charged with being an accomplice to murder.

What do you think of this horrible tragedy?

In 1994, RuPaul Starred in This Action Comedy About Stealing HIV Meds
The New York Public Library's Archives Are a Treasure Trove of Queer History
Did You Know There’s a Sequel to the 'Rocky Horror Picture Show' Called 'Shock Treatment'?
The Nazi Regime Set the Trans Rights Movement Back Decades. Here's How.
English