Written by Daniel Villarreal on August 24, 2015
Be first to like this.

We probably should have seen this coming, but AnytimeCostumes.com is selling a Caitlyn Jenner costume: it’s $74.99 (which is waaaaaay too much to pay for shorts, a padded top, pageant sash and wig) and though the costume is described as “unisex”, it’s listed under “men’s costumes.” Sigh. 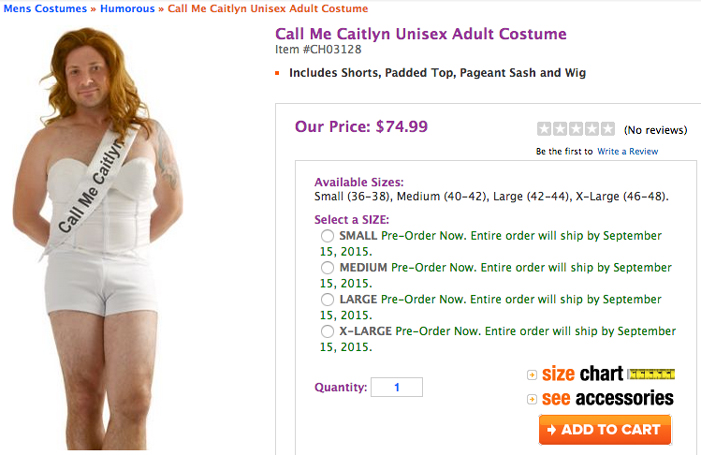 It’s conceivable that Jenner’s cisgender male fans might want to dress up as her for Halloween — even famous baseball player Jose Canseco pledged to show his support for Jenner by donning drag for a bit. But transgender identity isn’t a costume, and selling it as such contributes to the negative idea that transwomen are just “men playing dress up” or worse, men masquerading as women with the intent of sexually deceiving heterosexual dudes. Such preconceptions form the basis of trans-panic defenses such as those used by the murderers of transwoman Gwen Araujo.

Furthermore, the costume makes a joke of trans identity by saying in the description, “you’ll be sure to get a few laughs out of your friends and the other guests at the get together.” The costume’s picture shows a tattooed man with scruff, chest hair, hairy legs and a tattoo demurely smirking, as if to say “There’s no way you could confuse this Caitlyn Jenner with a real woman.” It reduces Jenner’s iconic coming-out into a mean punchline.

Everyone has seen Vanity Fair‘s popular July cover, so you’ll be easily recognized this Halloween when you dress up in the Call Me Caitlyn Unisex Adult Costume. With the items in the set, you’ll be able to emulate her picture perfect look for the upcoming party this year. Included are a white padded top and matching shorts as well as a brunette wig so that you can dress as the softer side of the popular Olympian. A sash that says “call me Caitlyn” also comes with the set so that there will be no mistaking who you are dressed as this Halloween. You probably won’t break any Twitter records when you wear this outfit like Caitlyn did when she first made her account, but you’ll be sure to get a few laughs out of your friends and the other guests at the get together.

We’ve also noticed that WholesaleCostumes.com is selling the Jenner costume for $49.90, using the same awful model photo but with a slightly more respectful description:

If you want some “Vanity” this Halloween then try wearing the Unisex Call Me Caitlyn Costume. This ensemble is designed after the one worn by the newly transformed Olympic gold medalist as she made her debut on the cover of a magazine and will make you the top news story of the night when you show up to party dressed as her. Included in your purchase is the unmistakable outfit consisting of a white corset and a pair of matching shorts. You will also receive a wig featuring her wavy locks and a sash reading those famous first words, “Call Me Caitlyn” so that everyone knows who you are. This unisex costume can be worn by both men and women but either way it’s guaranteed to be a show stopper.

WholesaleCostumes.com also has a “Tranny Granny Men’s Costume” which is just ugh.

Granted, there will always be shitty and offensive Halloween costumes that mock celebrities, current events, entire races and cultures — but we certainly don’t have to accept or settle for them. We’ve contacted both costume sites and will report when we hear back from them.

These 29 Fictional Characters Encourage Us All to Embrace Our Femme Selves
Gay Guy Gets a Card From His Grandparents: ‘Happy Birthday, You’re Going to Hell!’
10 Trans YouTubers You Should Be Watching
Does This MCU Short Film Confirm One of the Franchise's Big Villains Is Actually Queer?
English