Blah blah blah leprechauns aren’t real, they’re just mythical creatures blah. I hear you. But you know what else? SHUT UP, that’s what.

Leprechauns are excellent. They give the world hope — mostly for pots of gold, which is a fine thing to hope for, even if you never get one. And on this St. Patrick’s Day, when you are a) listening exclusively to The Pogues and B*Witched and b) not walking around pinching anyone because you will be slapped, you’d also do well to remember the other lessons you’ve been taught by those tiny people in green suits. Lessons like:

When I was a child, there was this other kid in the neighborhood whose parents were overly attentive to his dietary habits and he was never allowed to eat sugary cereal. He’d come to our house and eat Lucky Charms, which, in case you forgot, are magically delicious and also the favorite food of “Lucky,” the brand’s leprechaun mascot.

That kid was never caught by his parents for this food crime and mine never ratted him out because they didn’t give a damn. Those little marshmallow rocks in the shapes of stars and clovers are insanely tasty no matter what your age, and will never harm you because sugar is full of nutritional properties. I eat them and do not have diabetes. Yet.

Also, that kid is now in prison for identity theft, so that’s what being well-brought-up does for you.

It’s cute to be drunk.

The best leprechauns have adorable red noses and cheeks, both of which are side effects of alcoholism. See the Rankin-Bass special, The Leprechaun’s Christmas Gold, which shows you just how cute gin blossoms can make your skin appear. There are other lessons to be learned from watching it, but they make absolutely no sense at all. A young sailor digs up a Banshee Tree that unleashes an evil crying rain on a deserted Leprechaun Island on Christmas Eve. This results in the scientific phenomenon of a rainbow and a not-quite-scientific pot of leprechaun gold at the end of it. The banshee disrupts a leprechaun marriage thanks to her greed for gold, the only thing that can cure her salty banshee tears. Meanwhile, the sailor meets a pretty young (and crying — A CLUE!) castaway who wants the gold to build a new boat and she puts him into a 100-Christmas-long coma. And now you know that you should never be horny or help anyone ever because they’ll take your secret gold, eliminate your consciousness and destroy Christmas. Just keep drinking. 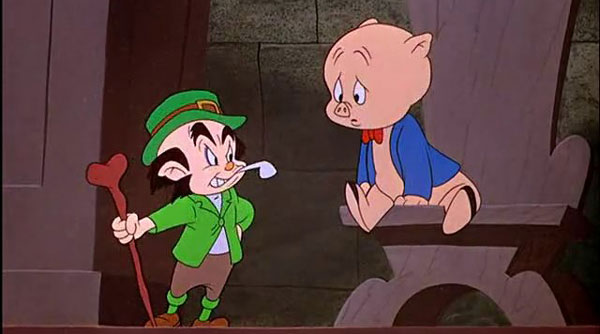 Be gracious or else.

When Porky Pig goes to an abandoned castle on a rainy Irish night in the Warner Brothers Merry Melodies short, The Wearing of The Grin, he behaves boorishly, bossing around his leprechaun hosts. They, in turn, torment him and make him wear green shoes that never stop dancing. This makes Porky run away. Moral: Put on some pants and be nice, asshole.

O’Reilly the Leprechaun, a recurring character on The Simpsons, tells Ralph Wiggum to set stuff on fire. Always obey the leprechaun because when the ashes clear away from whatever you just arsoned the fuck out of, you may find his pot of gold. And won’t you feel good then?

Do not go to outer space or to “the hood.”

In the essential Leprechaun 4: In Space, the evil murder-leprechaun from the first three Leprechaun movies is reborn in space by exploding out of a guy’s dick. Do not go to space or this could happen to you. If you happen to accidently find yourself in space, stay away from all the dicks.

In the next Leprechaun film, Leprechaun: In The Hood, Ice T turns the evil murder-leprechaun to stone, but then some rappers bring him back to life. In turn, Ice T is killed. Do not go to the hood (of your choice) or this could happen to you. If you happen to accidentally find yourself in a hood, stay away from Ice T.

Disney’s Darby O’Gill & The Little People has adorable, non-digitally shrunken actors playing the leprechauns. They’re all quite jolly and hang out with young, hot Sean Connery. In all issues pertaining to leprechauns, proximity to young, hot Sean Connery matters most, so if you can swing it, become a leprechaun, then hit the “go” button on your time machine. Boom, there you are, ready for Sean Connery and whatever gold he’s hiding at the end of his rainbow.

Radical Faeries Have Been Pushing Queer Boundaries for More Than 40 Years
Elska Shines Its Queer Light on Atlanta, the Gay Black Capital of America
The 1987 Movie ‘Masters of the Universe’ Was Apparently as Painful to Star In as It Was to Watch
5 Super Queer Gifts Perfect for the LGBTQ Friends and Family on Your Holiday Shopping List
English