Written by Daniel Villarreal on August 21, 2015
Be first to like this.

Sir Patrick Stewart — the beloved actor who played Professor X, Captain Jean Luc Picard in Star Trek: The Next Generation and also a fashionable older gay man in the 1995 comedy film Jeffrey — made an great point about male intimacy on Conan O’Brien’s talk show this week, using only conversational tact and a kiss. Seriously, it was a big deal. 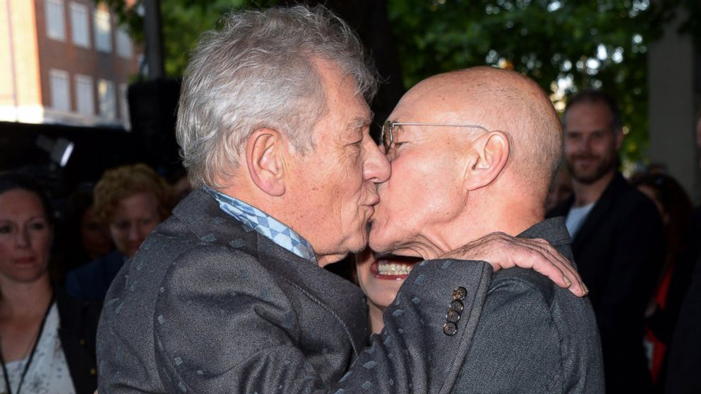 Conan asked about the kiss, and Stewart said that he and McKellen normally greet each other and part with a smooch, and that Stewart kisses other men the same way as well. Stewart then asked O’Brien if he wanted to try and O’Brien obliged.

They shared a nice kiss and afterwards Stewart asked O’Brien if he felt an emotional connection — O’Brien responded, “I did” and Stewart delightedly clapped his hands together and exclaimed, “Good! That’s all that it takes!”

“Why is it unacceptable for heterosexual men to kiss each other on the lips?” O’Brien wondered aloud.

“Who says it’s unacceptable?”Stewart replied. Raising a finger in the air, O’Brien proclaimed, “I say it should be commonplace!” And Stewart responded, “If you say it, it will happen!”

Seriously though, when was the last time you saw a straight actor kiss a dude in an unscripted talk show? And wouldn’t the world be cooler if guys could just kiss and show physical affection without being all dude-bro and “no homo” about it? Let these two gents be a model for open-minded affection everywhere — except for places where it’ll get you killed. Everywhere else: pucker up.

If you hate watching videos, here’s some animated GIFs of their entire exchange below.

History of the Action Figure, Part 1: G.I. Joe and the Rise of the Man-Doll!
10 Trans YouTubers You Should Be Watching
The Final Episode of 'Dinosaurs' Is Still the Saddest, Most Poignant Finale in TV History
Our 10 Favorite LGBTQ Games Featuring Gender and Sexual Inclusivity
English