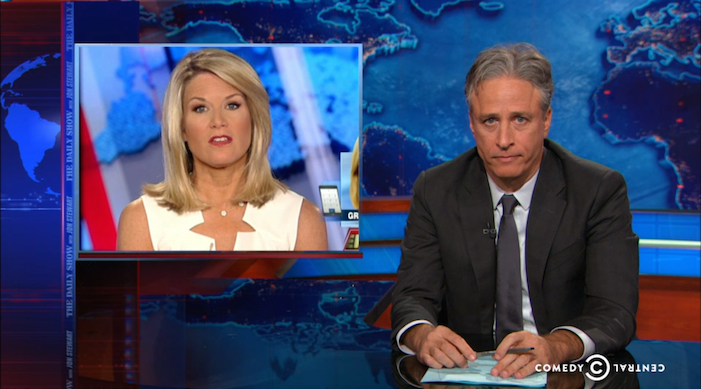 The best place to start is with the awesome news from a couple months ago of nationwide marriage equality. And, of course, Jon Stewart was there. Opening the show the Monday after the decision, the “Fifty States of Gay” segment started out with some well-deserved celebration before mocking those who were convinced that the sky was falling. (NOTE: The sky remains where it has been for many years — up.) But, in the follow-up segment, Stewart took down the biggest fish; Scalia’s hilariously weird and sad dissent.

2. A Taste Of Schism 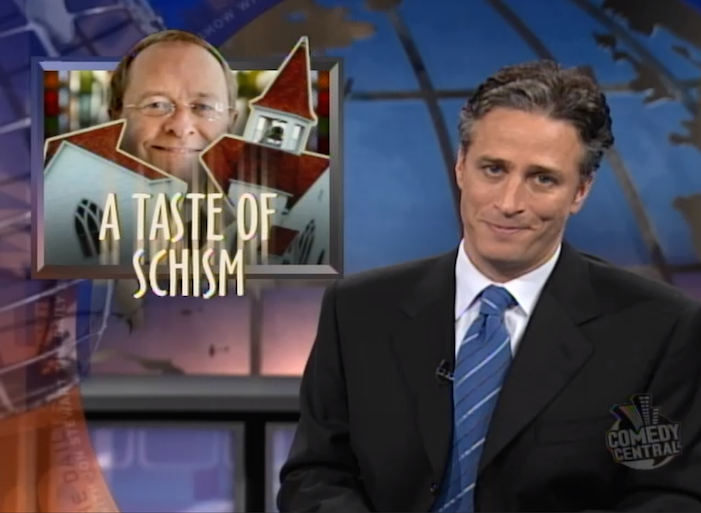 Jon Stewart has long been an ally in the LGBTQ corner. He opened this clip from 2003 with “We at The Daily Show have long been known for our aggressive homosexual agenda,” leading into a story about the first confirmed gay Anglican priest. As a bonus from the same episode, Stephen Colbert joined as the Senior Human Sexuality Consultant. It’s been so long since Colbert’s been on The Daily Show, it’s easy to forget what chemistry he and Stewart had together. 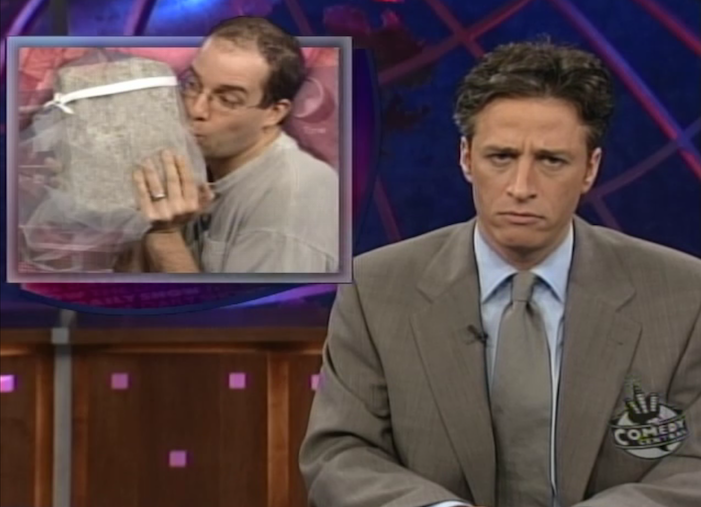 This clip from 2000 is a bit of a stark reminder; it opened with the passing of California’s Proposition 22, which said the state would not recognize gay marriages from other states — despite the fact that no state allowed gay marriage yet. The hook, though, is the protests against homophobic radio host Dr. Laura Schlessinger, who…. well, does it really matter what homophobic bullshit she was peddling at that particular minute in time? 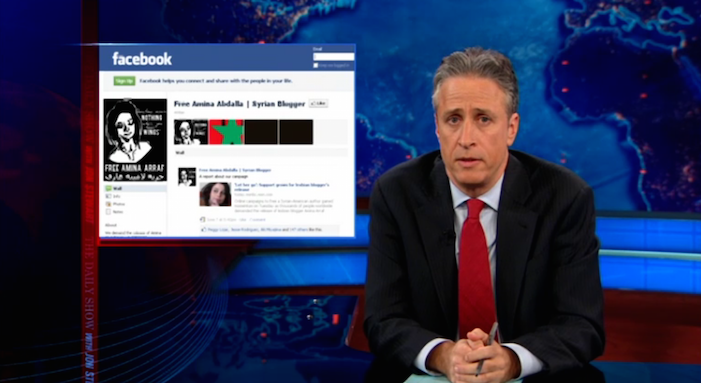 In this 2011 clip, Jon Stewart revealed the truth about Gay Girl In Damascus. If you don’t remember the details, Gay Girl In Damascus was a blog from the point of view of a Syrian lesbian about the uprising in Syria. The ruse started to fall apart when the author was “abducted”: soon it came to light that she was not abducted… nor Syrian… nor a woman… nor lesbian. And it gets “better”… the reason the blog’s author Tom MacMaster decided to have his character “abducted”? He was going on vacation, and needed an excuse as to why there wouldn’t be posts for a couple weeks.  WAT. (And that’s not even the FINAL twist of the story.) 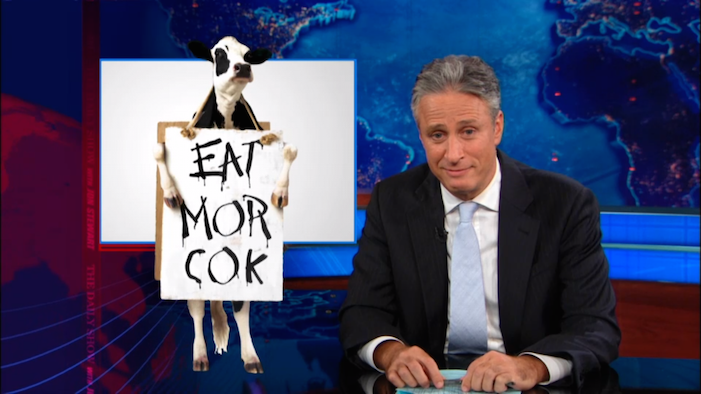 You’d think that Chick-Fil-A would have learned from this 2012 clip, but nope. Stewart looked at the people and organizations who decided to stay firmly anti-gay in the face of increasing acceptance. At least one group in this segment has learned; the Boy Scouts have recently backpedaled on their anti-gay policies somewhat. Still, Stewart was helpful to the Chick-Fil-A folks by reminding them of other forgotten examples of “Biblical marriage.” 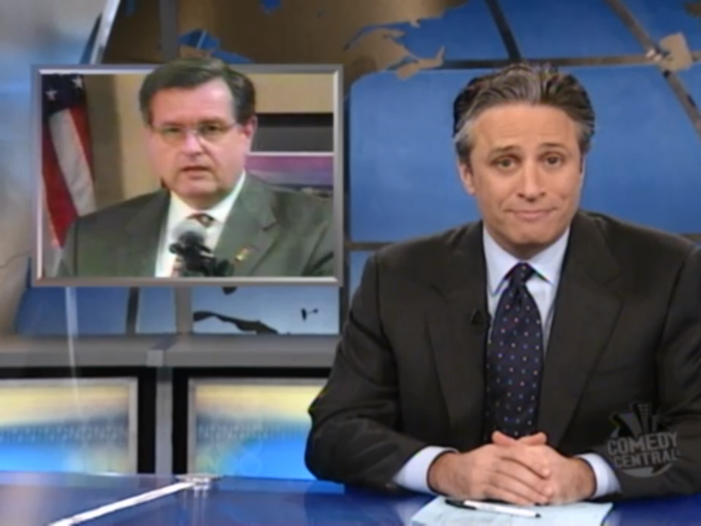 Yeah, at this point, the whole “Anti-Gay Republican secretly enjoys gay sexytimes” bit is pretty cliche. But it still gives us a good bit of schadenfreude watching Jon Stewart in this clip from 2005. Jim West, the mayor of Spokane, Washington (not the Jim West who plays guitar in Weird Al Yankovic’s band — that dude is awesome), went through a laundry-list of anti-gay legislation… only to turn up cybersexing in gay chatrooms with “adults [sic] men”. One mark against Jon Stewart though: “Spokane” rhymes with “Man” (like the folks West was cybering with), not “Brain” (like what West wasn’t using when he passed those anti-LGBT laws). 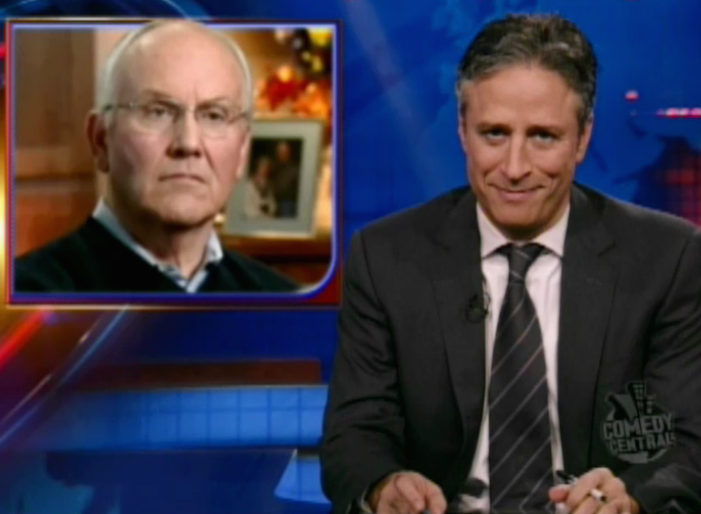 Of course, no mention of Republican-closet schadenfreude would be complete without a mention of Idaho Senator Larry Craig. Craig was the anti-gay senator perhaps best known for his “wide stance” in an Minneapolis-St.Paul airport bathroom. As part of Craig’s apology tour, he spoke with NBC’s Matt Lauer… and, of course, Jon Stewart was there, and it’s just a cavalcade of hilarity. 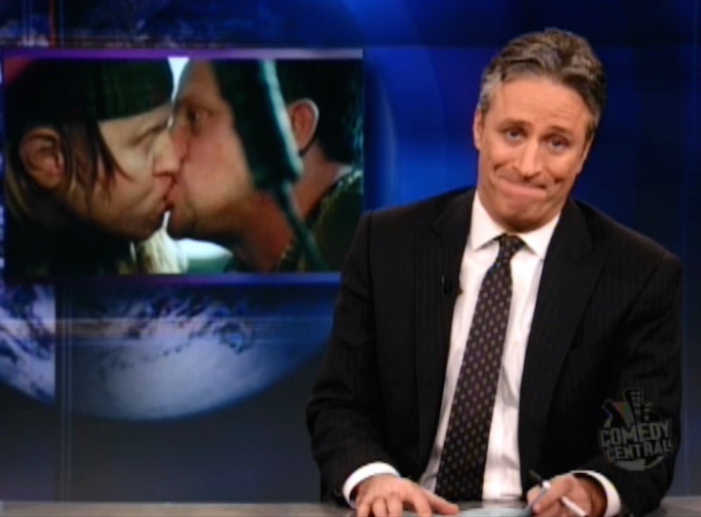 It’s kind of fun when Jon Stewart takes down bad comedy principles, too. In this clip about the 2007 Super Bowl Snickers ad, Stewart decimated the idea that “gay panic” is funny. Because, seriously, not only is it gross and homophobic, but… it’s totally hack too. Later in the clip, he also took down a Super Bowl ad from GM that treated suicide in a really light, gross way.

9. A Million Gays To Deny In The Midwest