VIDEOS: 10 Times Degrassi Went For It With LGBT Moments

Written by Terri Washington on September 12, 2015
Be first to like this.

Degrassi has become a beloved hit because of its in depth exploration of characters and teen issues. It wasn’t until 1987 that Degrassi Junior High premiered in America. Though the first season the series briefly touched on LGBT people with a rumored lesbian teacher whose plot-line got dropped without much fanfare.

It wasn’t until the 2001 reboot, Degrassi: The Next Generation, when the show, with the “It Goes There” tagline, actually WENT THERE with LGBT characters. Not only did Degrassi use actors who were around the same age as their characters (unlike the senior citizens on Beverly Hills 90210), but their characters dealt with rape, teen pregnancy, drug use and a straight male contracting HIV.

Degrassi ended its American TV run on Friday, July 31 and will switch to Netflix in 2016 with another reboot, but until then, let’s re-live 10 times when the show dared to give its LGBT characters some dramatic depth!

Marco Comes out to Spinner

In the episode, Marco reveals he is gay to one of his best friends, Spinner, who is completely unaccepting. Spinner goes as far as to write “Marco is a fag” on the restroom wall. Marco gets assaulted, outed and alienated by his friend all in the span of a week. Adamo Rugierro, the actor who played Marco said, in the It Goes There: Degrassi’s Most Talked About Moments, Marco was his gay icon and it helped him with his own coming out.

Students Find Out Adam is Trans

Degrassi explored a transgender character in season 10. Adam Torres, transferred to Degrassi due to the excessive bullying at his previous school. Early on in the season,a a female classmate outed him, which led to two male students carrying him out of the boys bathroom and throwing him into a glass door. As the series went on, Adam became well accepted and romanced a few ladies. Unfortunately, Adam passes away in season 13 during surgery after he drove into a tree.

Paige Michalchuk and Alex Nunez became friends out of thin air in season four and in season five their relationship turned romantic. Both characters had only previously dated men on the series so when they shared a kiss in episode 11 fans were shocked. They had an on-again-off-again relationship for multiple seasons afterwards.

Marco had been out to his friends before he revealed it to his family. His father had a history of saying homophobic comments but his mother, deep down, always knew her son was different. Marco later comes out to his father in front of the entire school in the next season.

Riley Stravros was the stereotypical jock, wanting so desperately to deny his homosexuality that he bullied others, had angry outbursts and regularly delivered sarcastic comments. Riley attempts to date girls and kiss his male friends until he meets Zane. He dates the openly gay Zane but keeps it a secret, though he finally comes out to his mom in season 11.

Fiona Coyne is the rich girl and Holly J. Sinclair is the bitch girl — perfect best friends. Fiona develops unreciprocated feelings towards her best friend but eventually moves beyond those feelings and develops multiple relationships with other girls.

Tristan Milligan couldn’t find love at Degrassi, and eventually began to obsess over a new teacher, Mr. Yates. Surprisingly, Yates returned the feelings and invited Tristan, a sophomore, to his apartment where they later had sex. When Tristan’s best friend Maya gets word of their tryst, she gets Mr. Yates fired even though Tristan believes they’re in love.

Miles Hollingsworth III is a whiny rich boy looking to get attention any way he can. One of those ways was to secretly date the openly gay Tristan. After Miles’ long, complicated relationships with girls, Tristan was a breath of fresh air. Miles’ character never officially came out as bisexual, but he had strong romantic feelings for Tristan nevertheless.

Marco didn’t know he was gay, he just knew he was attracted to boys. His best friend, Ellie, had a serious crush on him which presented him with the perfect opportunity to deny his homosexuality. After a disastrous first date, Marco and Ellie tried very hard to continue a relationship. During a study group, Marco and Ellie go upstairs and start to make-out. An uncomfortable Marco pulled away from her which led to a very real, emotional and heartfelt conversation about Marco not knowing what he is, but wishing he could be attracted to Ellie. 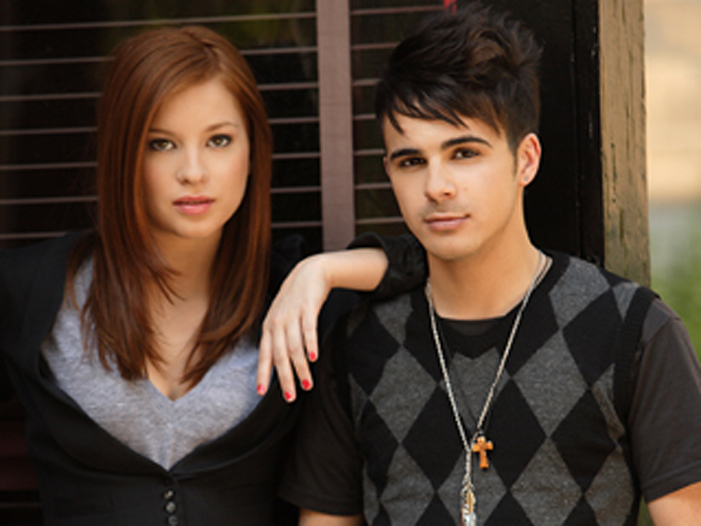 Adam Torres had been living as a male for years but because he was too young to transition, some of his family members only knew him as ‘Gracie.’ When his grandmother comes to visit, Adam (dressed as ‘Gracie’) reveals his true male self to her. His mother begs him to sit down and Adam tells his grandmother he’s been taking ballroom lessons. After a talk with his mom, Mrs. Torres admits to Adam that she still sees him as her daughter. At the end of the episode, Adam and his family burn ‘Gracie’s’ clothes.
(featured image via wikia)
Canada Degrassi Junior High

Here's How Leading Psychologists Say 'Traditional Masculinity' Harms Boys and Men
Clooney's New Film 'The Tender Bar' Is Steady and Entertaining But Left Us Thinking 'Is That It?'
When Did the Word 'Gay' Stop Meaning 'Happy' and Start Referring to Homosexuals?
These 5 Video Game Characters Illustrate the Evolution of Trans Representation in Gaming
English