‘Was It Worth It?’: The Online Shaming And Suicide Of Izabel Laxamana

Last May, Tacoma, Washington resident Jeff Laxamana posted a video on YouTube. The video shows his middle school-aged daughter Izabel standing in what appears to be a garage. By her feet lies a pile of thick hair, which has been chopped from her head. The cameraman taunts the thirteen year-old, who replies in monotone monosyllables.

“[focusing on the discarded hair] The consequences of gettin’ messed up. Man, you lost all that beautiful hair. Was it worth it?”

“How many times did I warn you?”

A few days later, Izabel jumped off a bridge to her death.

Before Jeff could remove the video from YouTube, one of Izabel’s friends recorded it and re-uploaded it. Now a debate has spread across the internet: Is Jeff Laxamana responsible for his daughter’s death? Did this humiliating YouTube video drive his daughter to suicide? Is public shaming a form of abuse? 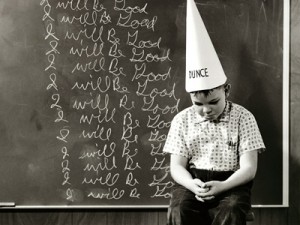 Jeff Laxamana is not the first parent to use the internet as a tool of shame-based discipline. In 2012, a North Carolina man named Tommy Jordan uploaded a YouTube video of himself shooting his daughter’s laptop. This, he said, was punishment for posting an insulting rant on Facebook (a rant which her father had had to circumvent her privacy settings in order to read).

The use of public shame as a disciplinary tool is much older than the internet, of course. The use of the duncecap in classrooms goes back to at least the 19th century. Americans have been shaming each other since well before the United States was even a country.

The practice of cutting off a woman’s hair to punish her goes back to Biblical times at least. 1 Corinthians 11:5-7 reads:

5 But every woman who has her head uncovered while praying or prophesying disgraces her head, for she is one and the same as the woman whose head is shaved. 6 For if a woman does not cover her head, let her also have her hair cut off; but if it is disgraceful for a woman to have her hair cut off or her head shaved, let her cover her head. 7 For a man ought not to have his head covered, since he is the image and glory of God; but the woman is the glory of man.

Hair, a powerfully seductive woman’s feature (though uh I’m fairly sure men have lusty locks as well), must be controlled. If it is not kept under wraps — if a woman does not control her sexuality appropriately — it must be taken from her. Men were not shaved. Of course, shaving man’s head doesn’t have the same impact. A man with a shaved head is nothing unusual. A woman with a shaved head is damaged or crazy. Her beauty, her femininity, her defining feature, has been lost.

At the end of World War II, members of the Resistance shaved the heads of women accused of associating with the Germans. 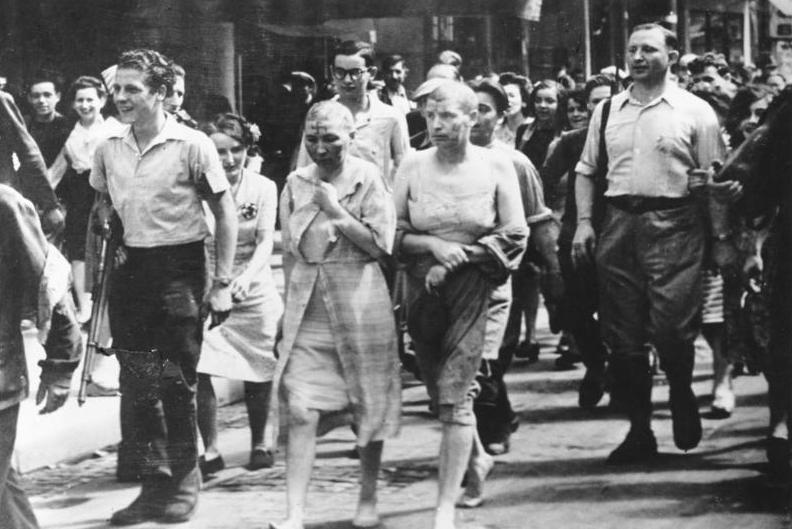 So Jeff Laxamana’s conduct is nothing new. What makes it special is the use of social media. In the old days, stigma was generally limited by region. A person could potentially escape a bad reputation by moving to another neighborhood. Or, alternately, the community might lose interest in the scandal and eventually stop caring. The shame would fade over time.

But on the internet, nothing goes away. There’s no cooling off, either; there are always fresh eyes to rediscover the embarrassing video or image macro.

Stepping away from the computer isn’t really an option anymore either, as the internet has become such a big part of our lives. We handle our banking online. We pay our bills online. We apply for jobs online. We keep abreast of school assignments online and turn in term papers online. We keep in touch with far-flung relatives online. We socialize and make new friends online. Living without internet access is like living without a telephone.

Social media can draw an oversized response. A crappy music video on YouTube can spawn an endless barrage of vulgar insults and death threats.  An angry blog post about an ex-girlfriend can turn into a months-long hate campaign that drives women from their homes. Your public embarrassment could end up being re-enacted on a nationally syndicated television show.  Your political cartoons can be manipulated to brand you as a Neo-Nazi.

Much has been made of how sexting teens don’t realize the consequences of their actions, but often it’s the adults who are clueless. Thomas Jordan’s gun-toting YouTube video got him an unexpected visit from Child Protective Services. And remember that mother who bullied her daughter’s classmate to death on MySpace?

Jeff Laxamana surely did not expect his daughter to jump off of a bridge. He probably thought he was using a creative form of discipline, a bit of tough love to set his daughter on the straight-and-narrow. Maybe he’d heard of Tommy Jordan and thought he’d get in on the action.

And obviously most children who are publicly humiliated don’t commit suicide. The Star Wars kid is still alive, as are Tommy Jordan’s daughter and Rebecca Black. The children forced to wear a dunce cap didn’t commit suicide, by and large.

But Izabel Laxamana was evidently more sensitive than a typical kid. On August 14, 2014, her Google+ account, which is mainly filled with YouTube comments on pop-music videos (this girl may well have been the only YouTube commenter ever who exclusively said nice things), displays the following comment on a vlog titled Alone:

I feel hated most of the time im in school i feel looked down on and i get judged alot…. But what keeps me going is people like kian who have gone through the same thing as me… In a school with so many people its weird to say “i feel alone” but the truth is that you really do feel alone. So thanks for everything kian….

The video features a youth talking about life with chronic anxiety.

Earlier, on July 9, 2014, Izabel commented on a video in which a vlogger spoke of taking a break from producing content due to mental health issues.

Admittedly, two YouTube comments are not enough to make a diagnosis regarding mental health. But it’s not hard to see that the girl had issues.

So why couldn’t her father see it?

A Cry For Help

All adolescents are overwhelmed by their feelings every now and then. All of them act out. All of them get a little melodramatic at times. All of them do stupid things and get into trouble. It’s not always easy for a normal person to tell whether a teenager has a serious problem or is just being a teenager.

The stigma of mental illness is another factor. It’s difficult to admit to having a mental illness or a mood disorder. It’s even harder for parents to admit that there might be something wrong with their children. Parents fear blame and judgment if their children are diagnosed with depression or anxiety or an autism spectrum disorder. So they carry on behaving as if the child is normal, as if a daughter with anxiety disorder could be punished into neuro-typicality.

And so problems fester, untreated. Children act out. Adolescent boys behave in antisocial ways, starting fights or breaking things, which gets attention but drives others away, making it more difficult to make the sort of emotional connections that can help heal a fractured heart. Adolescent girls generally act out more quietly, more privately. They harm themselves, not others. And as a result, they’re easier to ignore.

When a boy gets into a fight, authority figures must respond. There will be punishment, but there might be counseling.

When a girl stops eating or starts hurting herself, authority figures don’t have to respond. They can ignore it or shrug it off, or even sneer at it. Cut a classmate, and you face consequences. Cut yourself, and nothing happens.

Look at the general public’s response to eating disorders. At worst, they’re regarded with ridicule. Most of the time they’re treated like a silly little diet caused by fashion magazines, cured by uplifting soap commercials. In reality, eating disorders are the deadliest form of mental illness. Anorexia is twice as deadly as schizophrenia, three times as deadly as bipolar disorder, and four times as deadly as depression. A fifth of anorexia-related deaths are the result of suicide; only 46 percent of sufferers ever fully recover.

We respond at last when the sufferer does something drastic. She has a public meltdown. Or she gets too thin to be attractive. Or she slits her wrists — cutting in the wrong direction, we sneer. It wasn’t a real suicide attempt. Just a cry for help. She just wanted attention.

Even if that’s true, the fact that a girl felt that she had to take a razor to her own flesh just to get attention suggests that there is something terribly wrong. 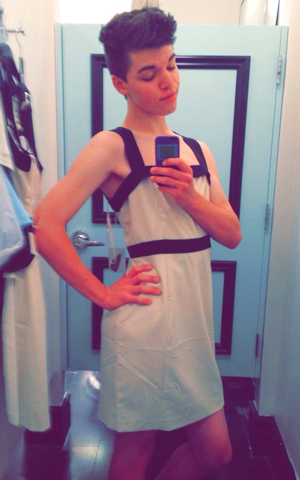 We don’t know what Izabel did, twice, to make her father so angry. But Jeff’s use of the phrase “getting messed up” in the YouTube video suggests substance abuse, perhaps alcohol. It’s a typical teenage infraction. It’s also a typical symptom of mental illness, a form of self-medication. A cry for help, in other words. Another parent might have responded to Izabel’s behavior, whatever it was, by putting the girl in therapy. Jeff Laxamana cut her hair off and put it up on the internet.

Jeff Laxamana has become the target of the public shame campaign he tried to start against his daughter. Angry netizens cry out for his prosecution — for child abuse, or even manslaughter.

Will he be punished by the legal system? Probably not. Leelah Acorn’s parents weren’t. Some people will defend Jeff. Hell, there were people who defended the Duggars.

There will be charity drives and hashtags and public awareness campaigns. Our attitude toward mental health will not change. The ancient custom of punitive social stigma will not go away. Eventually, most of us will get distracted and move on to other, less morbid forms of entertainment. Until the next YouTube video.

New Rom-Com 'The Lost City' Is Predictably Awful, But Is It Also Kinda What the World Needs?
The 1987 Gay Funeral Episode of ‘Designing Women’ Will Break Your Heart
'Rockstar and Softboy' Is the Perfect Blend of Gay Friendship and Magic in a Comic
Get Your Tissues Ready for Rina Sawayama's 'Chosen Family' Featuring Elton John
English