What Is a Blood Libel?

Written by Booty The Unicorn on January 12, 2011
Be first to like this. 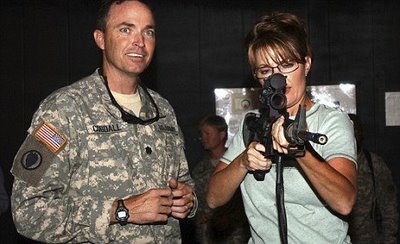 Sarah Palin broke her silence this morning, publishing a 7 minute video to her Facebook page. She then had her staff delete every single comment that was critical of her (couldn’t get the ones on our gay blog!) use of the now famous image that showed Rep. Gabrielle Giffords in a gun’s crosshairs. At this point, keeping her social networks free of criticism requires full-time work. But that’s neither here nor there.

In Palin’s video denouncing those who are suggesting the former governor is culpable in the attacks for, you know, posting pictures and tweets inferring a gun attack, she continues to use a complete lack of taste and rational thinking. Palin says, “Especially within hours of a tragedy unfolding, journalists and pundits should not manufacture a blood libel that serves only to incite the very hatred and violence they purport to condemn. That is reprehensible.”

So exactly what is a blood libel? Is this another Palinism, or a real term? To the Wiki, I say!

Whoa! Seriously? This choice of words seems exceptionally offensive considering Rep. Gabrielle Giffords is Jewish. Likewise for Palin’s assertion that the Catholic mass held for the victims will begin a healing process for the victims. This woman was shot in the head, and now you are dumping salt in her wounds by the wheelbarrow. Come on now!

“It is time to restore the American precept that each individual is accountable for his actions. Acts of monstrous criminality stand on their own. They begin and end with the criminals who commit them, not collectively with all of the citizens of a state.”

On a final note, the focus of this website is usually on positive, supportive topics concerning the LGBT community, and the businesses that support us. The shootings in Arizona have obviously sidetracked us from our mission, as we feel extremely passionate about the fallout from this tragedy. I’m sure our coverage is not everyone’s cup of tea, but we will continue to bring the issues raised by the incident to light for the foreseeable future. Agree or disagree, we hope that you will share your opinions on the subject with us in a civil manner. Name calling distracts from the very point we are trying to raise here. Thanks so much for your continued support.

***Update! Palin’s camp removed Unicornbooty.com’s permission to stream her video on our site. Switched to a privately uploaded YouTube version of the video instead.***

You Didn't Have to Make This, Vol. 4: These Low-Key Gross Hairy Leg Yoga Pants
Help Us Queerify Feb. 14 by Sharing These Queer Valentines From Some of Our Favorite Artists
'Spread the Love' Here on Hornet By Gifting Awards to Other Users' Posts
Learn These Shady Polari Phrases, You Cackling Alice!
English