Have you seen the new music video for Madonna’s “Bitch, I’m Madonna” single? It’s a four-minute explosion of color, hotel-party insanity, and wait-who-was-that cameos. Like Madonna herself, it’s kind of trashy, kind of fun and kind of similar to something we’ve seen before. But despite the fact that the video is a visual treat, it has so far failed to do the one thing music videos are supposed to do: sell the song.

First things first: The music video is rightfully making headlines for its ridiculous amount of star wattage. Madonna was able to rope in the obvious personnel — producer Diplo and featured artist Nicki Minaj. But she was also able to get Rita Ora, Chris Rock, Beyonce, Katy Perry, Miley Cyrus, Kanye West, and Alexander Wang, to varying degrees of what-the-fuck?!-ness. Madonna even roped in her son Rocco and… er… some sock puppets… to complete the madcap party. Perhaps her daughter Lourdes was too busy studying for her college exams to make an appearance?

While Madonna has been criticized over the fact that many of the big-name celebrities didn’t actually show up to the shoot (filming their cameos offsite), the caliber of talent that answered Madonna’s call is nevertheless impressive.

But aside from its many notable celebrities, the music video suffers from the fact that it’s too similar to other videos. Sure, the video is bright, colorful, and fun — and that guy Madonna pours a shot into at the 1:50 mark is smoking hot! — but it looks a little too much like the high-octane pastel freakiness of Rihanna’s “S&M” video, with a few elements of Christina Aguilera’s “Dirrty” video and Katy Perry’s “Last Friday Night” video thrown in for good measure.

Under normal circumstances, this would not be damning in and of itself; after all, Madonna has co-opted various sounds and styles throughout her career. But Madonna has long been seen as a trailblazer of the video artform, with many of her music videos considered amongst the most iconic of all time. Accordingly, there’s a sad sense of desperation in her current appropriation of recent video imagery; someone this legendary should be setting trends, not following them. 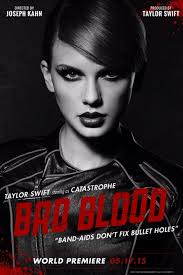 While neither Madonna’s nor Swift’s video were especially innovative, Swift brilliantly built up excitement for its release by teasing fake “movie posters” of the cameo performers weeks before the video was online. In contrast, Madonna only released a few teaser guest names mere days before her video’s premiere.

Additionally, Swift was able to incorporate her guest stars into a coherent plot, staging an epic battle between herself and Selena Gomez, while Madonna’s video was largely a carefully choreographed one-shot take of a well-staged hotel party. These differences don’t always matter, but again, in comparison to Swift’s video, Madonna’s pales in comparison because there is no story arc to follow.

But the real problem with “Bitch, I’m Madonna” is that it has so far failed to turn the song into a radio hit. Music videos are used to create awareness of, and to promote, songs to consumers. Ideally, a music video will complement the release of a song as a single, and the added exposure will generate radio airplay, which in turn will get consumers to buy the song. As previously mentioned, Madonna used to be great at this, as her legendary music videos accompanied, and helped define, some of the best pop songs of the ‘80s, ‘90s and ‘00s.

However, the “Bitch, I’m Madonna” video has been out for over a week, and the song has only made it to #84 on the Hot 100. What’s more, Madonna needs a hit worse than ever; while “Bitch, I’m Madonna” became her first song in six singles to make the Hot 100, the parent album, Rebel Heart, will most likely be Madonna’s first studio album ever to not have at least one top 10 (or even top 50) song. That’s an embarrassing statistic for an artist who currently holds the record for the most top 10s of any artist.

In stark contrast, “Bad Blood” immediately shot to #1 on the Hot 100 after the release of its music video. There’s definitely still time for Madonna’s video to translate into radio airplay, but the window of opportunity is quickly closing.

All this is not to say that Madonna is washed up and over. Given her long track record of changing styles and churning out hits, I’d say she still has at least a few more years in her — bitch, this is Madonna we’re talking about! But, despite the fact that “Bitch, I’m Madonna” has a cameo-packed, fun video, we’re going to have to call the song a flop. She’ll rise again one day, but this round goes to Taylor Swift.

6 Secrets Queer Black Men Wish Gay Society Realized
The Police, Disguised as Patrons, Attacked Queer People at the Black Cat Tavern
'Call Me Mother': How Drag Mothers Are Raising a New Generation of Queens
This Researcher Is Giving a Voice to Gay Iranian Men Through a New Book
English