Which Animals Are Gay: Infographic

Why we’re covering this: We love science! And the next time some fundamental religious person yells about homosexuality being “unnatural”, you can point out that there’s plenty of natural reasons for animals (and you and me) to be LGB!

Last week, the internet buzzed with reports of two male lions getting it on in a Botswana safari park after reportedly ignoring the local lioness and driving away the other males — what divas! There was also news of a male penguin couple being moved from the Berlin Zoo to a male-only sanctuary in Hamburg where they could live without the pressure of procreation. It got us thinking about other gay animals in the wild queendom.

Apparently there’s gay, lesbian and bisexual dolphins and bison and woodpeckers – oh my! Today’s infographic takes a quick peak at some of the many known species with homosexual members and the biological benefits of their same-sex desires. But in addition to the animals listed below, scientists say that they’ve reliably recorded same-sex behavior in about 450 different species and that over 1,000 more are likely to exhibit it as well — RAWR! 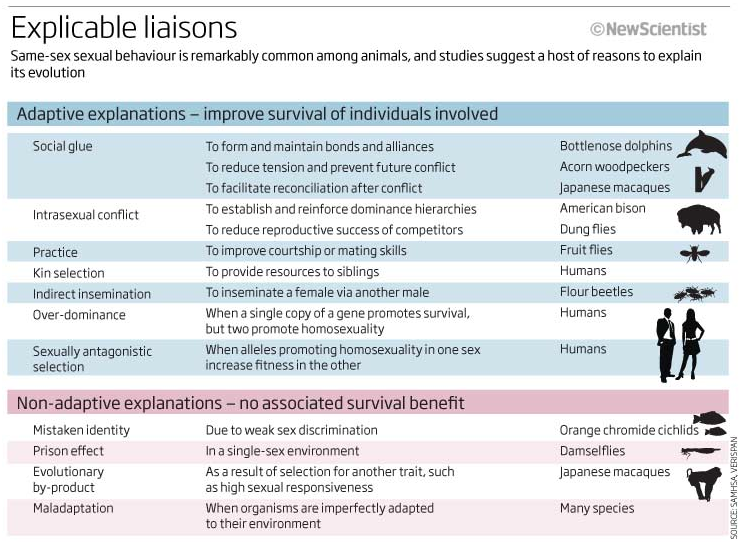 True story: Unicorn Booty was thiiiiiiiis close to being called Fruit Fly. I think we made the right choice, eh?

Heavy Is the Wig That Wears the Crown: An Oral History of the Miss Gay America Pageant
This Holiday Season, There’s a $2,600 Butt Plug With Your Loved One's Name On It
Drag Queens Weren't the Butt of the Joke in This 2007 'King of the Hill' Episode
Movie Musical 'Everybody's Talking About Jamie' Is a Flashy and Fun Ode to Non-Conformity
English