Why Are Republicans Attempting To Ban Gay Marriage In Already-Legal Iowa? 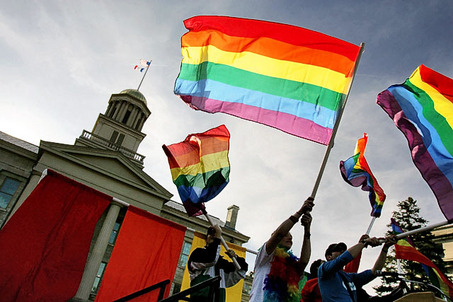 Big trouble in California Iowa. All but 4 of the Republican Representatives in the Iowa House co-sponsored House Joint Resolution 6, which seeks to redefine marriage in the state’s Constitution as between one man and one woman only. The kicker here is that Iowa is one of 5 states in our country that has legalized same-sex marriage. Joint Resolution 6 is essentially a jazzed up Proposition 8. It seeks to take away a right already granted to the state’s citizens. In short, it seeks to discriminate and make less-than. It’s bigotry.

Iowa Republicans have attempted several times over the past decade to prevent equality from taking root in the state. Constitutional bans have been floated in 2004, 2005, and 2006.

“Amending the Iowa Constitution to exclude gay couples will harm thousands of Iowa families,” said Carolyn Jenison, executive director of One Iowa, the state’s largest LGBT-rights organization. “Marriage says ‘we’re a family’ like nothing else and is an important way we care for those we love. Writing discrimination into the Constitution will only divide us at a time when we need to work together to tackle common concerns. Iowans expect their elected officials to focus on issues that matter to everyone, like creating jobs, providing educational opportunities, and improving healthcare. Going backward on equal rights sends the wrong message.” Amen.

The good news here is that the state’s Senate Majority Leader has promised never to even let Joint Resolution 6 come up for debate, effectively silencing the issue dead in its tracks. Things change quickly in American politics though, and this issue is frankly too close to the tipping point (Democrats control the majority by only 2 seats in the Senate) to rest on our laurels.

Iowa residents absolutely must call their representatives and tell them not to allow this discriminatory bill to pass. You can find your respective official at the Iowa Legislature General Assembly website HERE.

The ability of states to grant rights, only to have them threatened with repeal makes a federal marriage equality bill absolutely essential. Marriage equality is not a state’s right to choose issue, in the same way that we look back in shame that we once allowed states to decide on whether to allow slavery or not within their borders. We say this often here, but you can’t do equality halfway.