Why Has This Mexican LGBT Bookstore Soared While American Stores Close?

Voces en Tinta is a bookstore, coffee shop, cultural forum and publishing house; all of that in the heart of Zona Rosa,Mexico City’s LGBT neighborhood. Bertha de la Maza, the store’s founder and owner, is clearly excited and proud that they’ve just celebrated their fifth anniversary. While that’s clearly a success, it’s also an anomaly — during that same period, other LGBT-oriented bookshops have closed in Atlanta, Los Angeles, Nashville, New York, Philadelphia, San Francisco, Washington D.C., and Spain.

In 2013 alone, the number of independent bookstores in Britain lowered from 1028 to 987. And yet Voces en Tinta sells over a thousand books a month and has 18,000 more in stock with 600 clients every month from Mexico and around the world not to mention their online customers, and Twitter and Facebook followers.

In some ways, Mexico City is more liberal towards LGBT issues than the most U.S. states. Same-sex marriage has been legal in Mexico City — with marriages recognized nationwide — since 2009. Local law punishes discrimination based on sexual orientation and gender identity in work and public accommodations. And in November 13, 2014, lawmakers approved a bill allowing transgender people to legally change their identity without the need of a medical document.

Yet, as gay political scientist Genaro Lozano calls it, Mexico is still “macho land”: a country where most citizens identify as Catholic, gender roles are strict in familial and professional environments, and hate crimes continue to rank high: according to the organization Letra S, there were 887 homophobic and transphobic homicides between 1995 and 2013 (an average of almost one per week).

We talked to the owner of Voces en Tinta to get a better sense of the store and how it has survived when so many others are closing.

Unicorn Booty: Why did you decide to open a specialized bookstore when the publishing industry seems to be having a rough time?

Bertha de la Maza: I’m 50 years old, and I’ve never heard talks about Mexico being at its economic best or that Mexicans are reading more. Since when I was a child until now, Mexicans haven’t gone beyond reading two or three books on average, per year, per person. So, anytime is good actually to start a business like this. Or anytime is bad.

We had the online store for nine years, people already knew us, looked for us, and started asking for an actual bookstore, a physical space. We anticipated that many people wouldn’t buy these books, because they didn’t even know they existed. The books were usually known only in academic and activism circles. That’s why we decided to start a cultural forum as well, as a way to present books, give exposure to the authors and have an exchange between readers and writers.

What has been the response from the editorial industry, the writers, big publishers and independent ones? Have they reached out to you to help sell their LGBT titles?

Publishing houses have not wanted to open up. They still think LGBT and gender-themed books don’t sell, and that nobody wants them. There’s a lot of prejudice. But the writers and researchers in Mexico have been great, and many of them have decided to invest in actually publishing their work locally.

Do you think Voces en Tinta has played a role in motivating those authors to get out and get published?

Yes. Those who had published before would end up with many of their books at home, using them as table legs or whatever. Now they know there is a place where, while we might not sell them out, they at least have a good chance of getting a return on their investment and using that money for their next work. 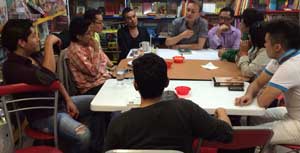 Do you notice people feel afraid to ask you something, or ashamed of coming into the store at all?

What about the events you organize? What kind of audience do you have over?

We do a number of activities: book presentations, poetry readings every third Friday night of the month, small-format theatre, small-format concerts with sopranos, pop singers, trova, children music like Cri-Cri, workshops to make alebrijes [folk art sculptures of small and large scale of fantastical creatures], sexuality workshops for children and adults. We also have events to have people meet the writers, talk to them, like our “Have breakfast with your favorite author” series.

How has Voces en Tinta managed to stay in the market considering that books can be found easier and often cheaper on websites like Amazon, and that some readers aren’t buying print books at all but using digital platforms?

Mainly because of the service we provide. People actually want to come back. At Voces en Tinta we’re not saleswomen but bookwomen. We love books, we read, and in that sense we can recommend, advise, accompany the client, be empathic. Another reason is that, pricewise, we compete with big book retailers. Finally, because at Voces en Tinta you can find books that are not elsewhere.

Why is it important to have a space like yours in a rather conservative and machista country?

I am sure that art and culture are the most humane forms of making a revolution. This is our revolution. Voces en Tinta has contributed to the decrease of violence and the increase of harmony in society. How? We promote values of gender equality and respect for diversity. All of our actions and events send a message. Our clients become involved with our programming proposals through their support, opinions, and decisions and they take our events beyond Voces en Tinta to their everyday. I think that our values counter those promoted by a culture of drug traffic, uncertainty, fear, and individualism.

Cheers to (All of) Us: Our Favorite Inclusive LGBTQ Bars in the United States
Fandom and the Internet Are Responsible for the Existence of Queer Anime and Manga
We're Celebrating Dolly Parton's Birthday With 5 of Her Most Brilliant Covers
'Butt' Is Back, Baby
English