Why Ignoring Small-Time Bigots Is The Best Thing To Do

Written by Terri Washington on November 5, 2015
Be first to like this.

Back in 2008, when I was a freshman in college, three idiots stood in the quad and preached about the sin of homosexuality. Dressed professionally in suits and ties and toting bibles, they were saying that college students were more likely to engage in homosexuality and, for that, they would go to hell. As I was eating my lunch I watched dozens of my college peers engage with the hate-mongers. The people continued to preach as my fellow student body continued to fuel their fire by conversing and arguing with them about homosexuality. After an hour of watching the spectacle, I continued my day and went to the next class.

I didn’t think much of the situation except, “Why were the students engaging?” The students made the mistake of giving these people an audience which encouraged them to preach their stupidity. The fact that every student who spoke up opposed their hateful views was a step in the right direction, but the students getting so riled up told me that tolerance was still an extremely touchy subject.

Lol at there being anti gay Christian protesters at #vidcon if only they knew how DELICIOUS dick was they wouldn’t be so uptight ?

Over the weekend, I wandered around one of the annual street fairs in my hometown of Alameda, California. To my surprise, a lone man stood on a corner preaching about the sin of homosexuality. I was surprised because this was the first time I had seen someone preaching at one of the street fairs — odd since the street fair is the perfect place to preach. Everyone in town comes, so there’s a large captive audience. Not only that, but there aren’t many gays here: According to the 2010 U.S. Census, less than 2 percent of Alameda’s population are same-sex couples.

Like my experience in college, I was expecting to see people argue, engage, or join in but no one did. Not one person. No one even bothered to give him the time of day. I was at that fair for five hours, and not once did I see anyone even look at him. Sure — it could be argued that people were too busy enjoying the day to waste time arguing with him.

But I think that people didn’t engage because being gay isn’t nearly as taboo anymore. By not engaging, the crowd showed just how unimportant and irrelevant his message was. After all, same-sex marriage was legalized and the world didn’t fall apart. Same-sex couples are expanding their families and Satan has not risen from the depths of Hell. 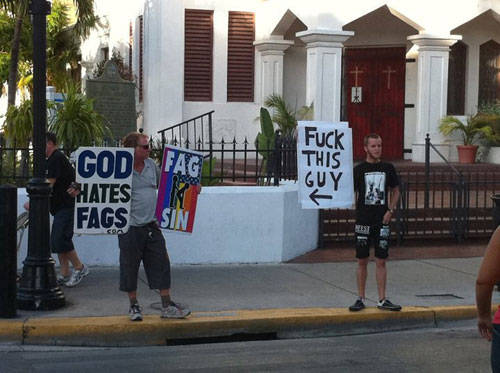 There is power in ignoring homophobes. To argue and engage gives these “preachers” legitimacy — by ignoring them, we show how irrelevant we think they are. As important as it is to fight for equality, it’s just as important to not give a glimmer of hope, audience or engagement to those who just aren’t worth the time to argue with. Don’t waste time fighting a pathetic bigot — instead, fight those who are infringing on the civil rights of the LGBT community. Don’t engage with an idiot; engage with the people who have the ability and platform to enact change. The preacher at the street fair was one man whose bigoted opinion fell on deaf ears, no one gave him any power and that was a beautiful sight.

His confidence decreased the more people continued walking past him. He finally stopped mid-sentence, put his head down, clutched his bible and walked to his car looking as defeated as can be. In my head I applauded my fellow citizens for ignoring his prejudice and giving him an audience of none. It was the reaction I had wanted to see back in college and I’m happy to see with progress in our country comes a change in attitudes.

Watch this video of anti-gay protesters at 2013 Pride parade:

Op/Ed: Tell Your Friends Who Rail Against Post-Thanksgiving Dinner Shopping to Suck on a Yam
Forget Adam and Steve, These Are the 5 Gayest Bible Stories Ever
How to Identify a Homosexual, According to a 1980 CIA Memo
Marti Cummings, the NYC Queen Running for City Council, on the Intersectionality of Pride and the Political
English