Why Is The LGBT Documentary ‘Gaming In Color’ Rated-R On Google Play?

Written by Terri Washington on September 9, 2015
Be first to like this.

Back in 2013, some of the folks behind the LGBT gaming convention GaymerX launched a Kickstarter campaign to fund a documentary on queer and LGBT issues in gaming. The documentary, Gaming in Color, had a limited release in April 2014 with screenings at numerous gaming and LGBT conventions, festivals and university events. In May 2015, the film got major distribution on streaming sites like iTunes, Amazon, and various gaming consoles, but, noticeably, amongst the major platforms streaming the movie, Google Play is the only platform that has the film rated R, which is strange considering that it contains no vulgarity or sex apart from “fags” being said a few times, the words “dicks” and “queer party bottom” both being said once each and a shot of Duke Nukem briefly flipping off the camera. 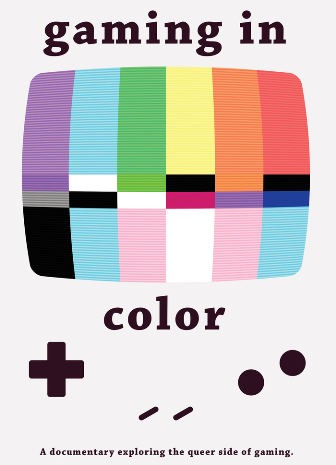 The film mostly features interviews with gamers about the diversity (and the lack thereof) for queer people in video games. Many of the interviewees express a fondness for gaming, especially games where you can alter a character’s gender or sexual identity to match the player’s. Few games give the LGBT community this opportunity and so gaming has become a positive outlet for them to be their authentic selves – even if that involves slaying goblins and fighting intergalactic space battles.

On Amazon, Playstation and Vudu the film is not rated, and other gaming documentaries on Google Play — like Ecstasy of Order: The Tetris Masters and GTFO (a documentary about misogyny in gaming) — are not rated.

The video below is the trailer for ‘Gaming In Color’

This story was originally published on 7/1/2015

These LGBTQ Cosplayers Blend Fandom With Queer Self Expression
Eytan Fox's Latest Film 'Sublet' Offers Up Tel Aviv Through a New Set of Eyes
The Bechdel Test Is the Bare Minimum for Gender Equality On-Screen ... and Hollywood Is Still Failing It
Queer Coming-of-Age Film 'Half Brother' Is Finally Available Outside of Brazil
English