Disabled characters frequently don’t show up in media unless they’re being thrown a pity party by abled folks. Treating characters like this is, well, kind of crap, especially when those characters are of an already marginalized group. Orange is the New Black — Netflix’s amazingly addictive dramedy series set in lesbian-filled Litchfield Penitentiary — showcases a lot of queer lives, but has also included multiple disabled characters. So as the show gears up for its third season release this Friday on Netflix, let’s see who they are and how they hold up… 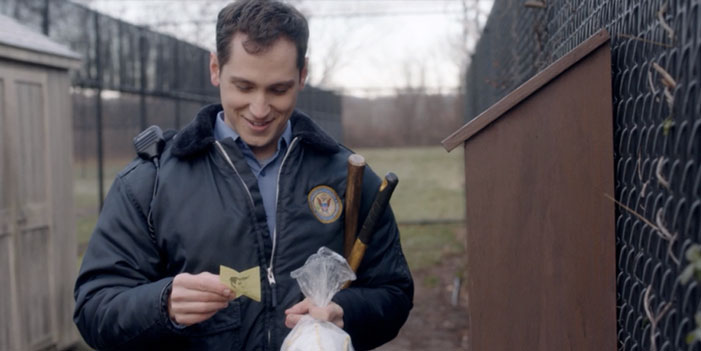 John Bennett: Disabled and Still Getting Some

John Bennett, a guard at Litchfield, comes off as able-bodied at first. Then his illegitimate inmate lover Daya pulls his pants off, looking for a third leg and instead finding a prosthetic one. She rather tritely kisses the prosthetic leg, but at least we’re getting to see a disabled character with a sex life. After all, many disabled folks are robbed of their sex lives by the culture we live in.

Looking at him from another angle, his prosthetic- which he has thanks to losing his leg after going into a dirty hot tub with a scrape- comes off as being little more than an embarrassment. People with prostheses do deal with issues, like phantom pain and depression. Portraying that realistically makes for more real, relatable characters, and quite frankly in my experience it’s very affirming to see someone who not only looks like you, but goes through the struggles that you do, in your favorite TV show.

That said, it isn’t always necessary to portray every aspect of a character. Besides, no one character can be responsible for representing all facets of disability, so Bennett gets a pass, as well as a blow job. 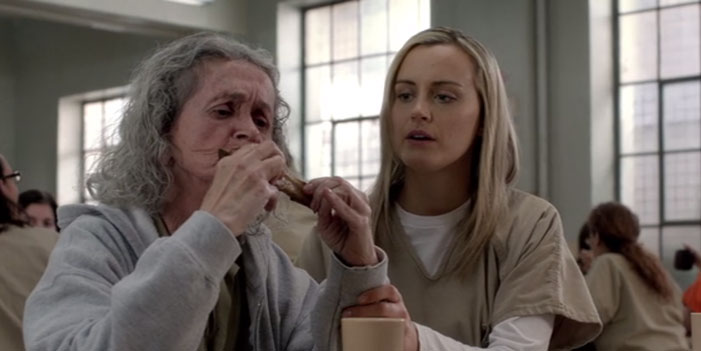 Jimmy Cavanaugh: Guest of Honor at the Pity Party

For those who didn’t notice this relatively unobtrusive character, Jimmy Cavanaugh is one of the older inmates at Litchfield. While her official diagnosis is unknown, she appears to have a disorder that affects her perception of reality and memory. This is mainly due to the fact that she claims to be in her twenties, which is patently untrue.

Jimmy’s life with disability is mostly used to show the cruelty of imprisoning an elderly and disabled woman. Most of her screen time involves us pitying her for doing things like jumping off of a ledge into an imaginary swimming pool, or gnawing on a piece of meat helplessly.

The worst part of this is when, in an attempt to rectify this cruelty, the prison dumps her at a bus stop in the name of “compassionate release.” Fortunately, that is a slightly fictionalized version of the real thing. Overall, she is a relatively one-dimensional character who doesn’t get much screen time unless we are meant to pity her. 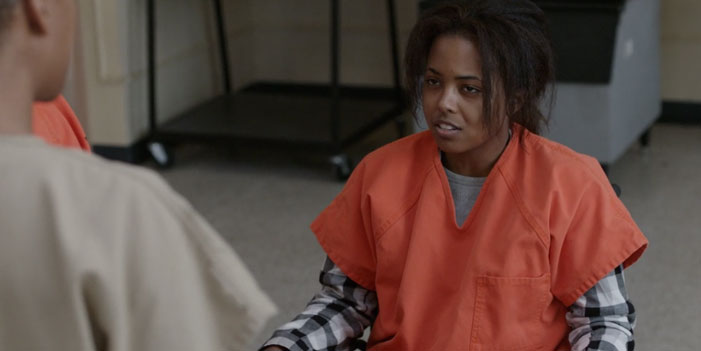 A group of juvenile delinquents visits Litchfield, and as the last one leaves the bus in a wheelchair, the guards wonder if she really belongs there. Inmates have been tasked with scaring the kids away from prison, but Dina, the girl using the wheelchair, initially scares them off herself. After all, you can’t be mean to a disabled kid, right?

When you’re disabled, people treat you weirdly in this really odd attempt at being polite. Unfortunately, instead of being genuinely polite, people just act paternalistic and overly nice. When your job is to terrify a teen, though, being nice doesn’t work, so the inmates just ignore her. Dina is great because of this; She sheds light on the weirdness that many disabled folks have to wade through daily.

Finally one inmate, Poussey, goes after her and finds that she is actually a badass. It turns out that she’s not only fully capable of getting around on her own, but being in a wheelchair hasn’t stopped her from running a gang and robbing liquor stores. 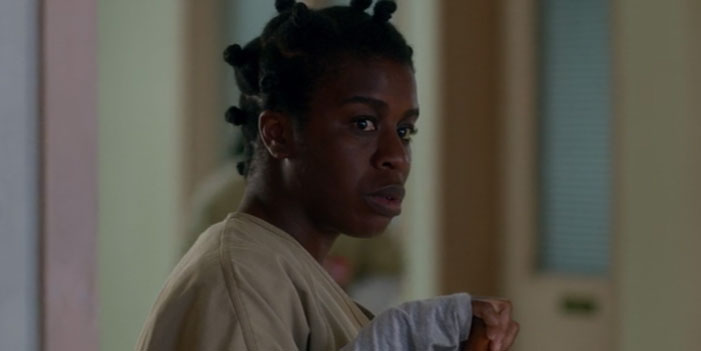 An inmate at Litchfield and one of the major characters, Suzanne obviously has some form of mental disability, though it never is disclosed what it is. Some speculate her to be autistic, due to her over-the-top body language, her frequent meltdowns, and her tendency to miss social cues. In many instances, she completely fails to read that Piper, the main character, has no interest in being her prison wife. She awkwardly attempts to win her over through doing things like throwing a pie at Piper’s ex-girlfriend.

At first, the show doesn’t handle her too well. She is given the nickname “Crazy Eyes” by her fellow inmates, and throughout the first season she comes off as an annoyance, mainly to Piper for the above reason. Suzanne even has a full-on meltdown and pisses on Piper’s floor after a severe rejection.

Despite the demonization, Suzanne turns painfully relatable in the third episode of season two, where we see flashbacks to her childhood. In a scene where a ten-year-old Suzanne is at a slumber party, we see her playing a story-telling game with the other kids. When it gets to her turn, she goes off on a long rant about dragons and death. It’s impossible not to cringe, especially if you’re autistic yourself, as the girl leading the game berates Suzanne, telling her that she’s stupid.

It’s a scene that brings back pain in the hearts of those whose brains are wired differently, be they autistic or otherwise, and that’s what makes Suzanne so great. Many of us bitterly remember trying to get along with the other kids and completely failing to relate, and when Suzanne is called stupid, it’s almost like we’re being called stupid all over again. It hurts, but it hurts in a way that TV shows are supposed to make you hurt.

That’s why it’s so important that characters like Suzanne exist. It’s difficult to empathize with people who are nothing like you, and it’s nothing short of depressing when your media is full of people who you can’t relate to. Suzanne’s story is real, it’s bitingly accurate, and it’s a breath of fresh air to be able to truly understand a character’s life. Even the problematic parts — like her nickname of “Crazy Eyes” — come together to make a story that is sadly genuine, making her an amazing disabled character.