The hashtag #BlackLivesMatter has garnered over 1.5 million tweets since its creation by Alicia Garza, Patrisse Cullors, and Opal Tometi. The hashtag highlighted the racially-charged murders of Eric Garner and Michael Brown and have since become a rallying cry for anti-racism protests worldwide.

But despite the massive response to the Black Lives Matter movement, the vast number of women behind it, and the fact that the hashtag creators are self-identified queer black women, feminist websites like Jezebel, XoJane and Feministing have all stayed relatively silent on police brutality issues, even as they focused on other events like the rape allegations against Bill Cosby.

It’d make sense that a movement getting its fuel from girl-power would be a hot topic for feminists. But unfortunately, a large part of mainstream feminism looks away when issues involve poor, dark-skinned, transgender, and disabled women. In response, many black feminists and womanists (women of color who fight for equality, but feel that “feminism” is too pasty) call this group of avoiders “White Feminists.” 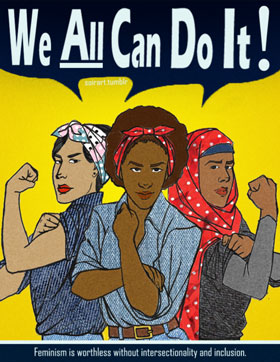 You don’t have to be caucasian to be a White Feminist, and the issues they fail on more than just racial issues. More so, White Feminism refers a mindset above all else, one that tends to overlook issues like the heightened risk of sexual assault on disabled women, the staggeringly high murder rates of trans women and of course black women getting terrorized by the police.

Initially, many black female activists criticized white feminists for specifically ignoring issues of non-white feminists. But White Feminism as a mindset is really typified by being single-issue: they have one cause (women’s rights), one oppression to fight (sexism), and anything beyond that singular cause is — in a White Feminist’s mind — just distracting from The One True Issue (how sexism affects the success of women).

Accordingly, White Feminists focus on issues specific to white women; they’ll fight the gender wage gap but ignore that the oft-cited stat of “women earning 78 cents to a man’s dollar” only applies to white women. They also only tackle issues that are woman-specific; that is, if it’s not an issue that affects all women because of their gender, it doesn’t count. The narrow focus explains why topics like #BlackLivesMatter don’t get as much coverage as they should — they’re seen as catering to a niche of people interested in racial issues rather than to women interested in women’s issues.

But many women’s lives are not single issue; many women are not just women — they’re also women of color, disabled, poor, gender-fluid, trans or all of the above. The intersection of oppressions they face don’t let them pick and choose their battles. But when they’ve tried to talk about the unique challenges they face, they’re often accused of stealing the spotlight away from real women’s issues. 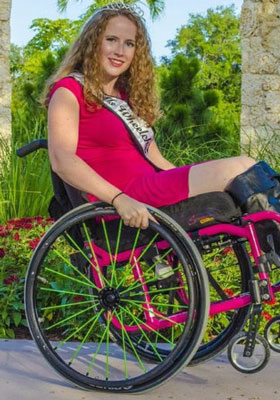 For example, after 22-year-old Elliot Rodger posted a misogynistic rant on YouTube and then went on a killing spree targeting women, blogger Stephanie Woodward wrote about the resulting pro-feminist hashtag #YesAllWomen. The hashtag creators hoped it would highlight the violence that all women face daily. But in her blog post, Woodward noted that discussions on #YesAllWomen overlooked the fact that disabled women like her often experience violence at greater rates than non-disabled women.

In response to her post, commenters began accusing her of distracting from the “real issue” of violence against women, the irony being that the hashtag reads “all women,” not “all able women.”

Let’s get it right. Sexual assault against disabled women is a women’s issue, it’s just one experienced uniquely by disabled women. The fact that it affects one subset of women doesn’t make it a distraction, but rather more pernicious and thus worthy of attention. Woodward responded best by asking “Do women with disabilities not count as women? Are we not part of your population?”

It’s also common for White Feminists to forget their privilege, as Emma Watson did in her United Nations speech. Now, don’t get me wrong — I really liked Emma Watson’s speech, but there was nothing revolutionary about a famous, wealthy, straight, cisgender, white woman talking about feminism, even if she did slightly acknowledge her own privilege while doing it.

Watson’s speech announced her “HeForShe” campaign asking men to help end gender inequality. But while discussing the unfair differences in how boys and girls get raised, she relied heavily on the gender binary, only once slightly acknowledging the gender spectrum. Her speech also revolved around the aforementioned white wage gap. And though she mentioned the long time rural African girls will likely wait until they all get to attend school, even that seemed to employ a bit tokenism rather than baldly acknowledging how poverty, race and culture compound the discrimination other non-white women face.

Her speech made an okay introduction to feminism, but was nowhere near groundbreaking. It could have been more so if she’d pointed out how much wider the wage gap is for Latina women, or mentioned the atrocities that women and girls of color face around the world, like child marriage and female genital mutilation.

Unfortunately, it might have been most groundbreaking of all someone less intensely privileged had delivered the speech. After all, feminism is the struggle of the oppressed, and those most silenced should be given the stage. But such a speech would likely have generated less attention than Watson’s did — just another example of how race and privilege often trump oppressed voices.

White Feminism rears its head in pop-culture much closer to home too. Just compare the love that Emma Watson got with the criticism Beyoncé faced for taking risque pictures after her VMA performance in front of a screen with “feminist” displayed in all-caps. One feminist writer, Hadley Freeman of The Guardian quipped, “Being photographed in your underwear doesn’t help feminism.”

Possibly, and as a wealthy celeb, Beyoncé is hardly the most oppressed. But that hardly voids her right to call herself a feminist. Remember, modern feminism birthed the SlutWalk — the scantily clad womens’ march affirming female bodies after a Toronto police officer said women get raped because they’re sluts. As such, it’s contradictory for feminists to claim that a woman isn’t one if she acts too sexily.

It’s no mistake that Beyoncé got this treatment though. Black bodies often get read by White audiences as especially sexually deviant, a view that persists from slavery-era stereotypes of “sexually insatiable” black women. The racist belief that black women are more sexually deviant than white women ties into the old double-standard of “respectability politics,” the same thinking that blames “slutty women” for rape and black people for the racism they face — if only they looked and acted more respectable! So naturally, any black woman who flaunts her sexiness is not respectable and therefore not a real feminist. With this, White Feminism labeled Beyoncé as a fauxminist.

Moving away from race, other underrepresented women, such as trans women, face disenfranchisement by White Feminism too. Largely it isn’t due to malice, mostly ignorance. But it’s still very sneaky and small instances pop up everywhere.

Take this parody of “All About that Bass” where a woman sings, “It’s pretty clear that I am not a dude” while gesturing towards her crotch and boobs. Naturally, vagina and breasts are what makes one a woman — said no trans woman ever! Plus, the predominantly skinny and white performers (alongside one Asian woman) also diss twerking as brainless with the sarcastic lyric, “Don’t worry about brains, just twerk those feminine wiles.” As a musical advocate for tough women in business, the singer didn’t mean to diss trans woman or black female dance moves, but nevertheless she did. 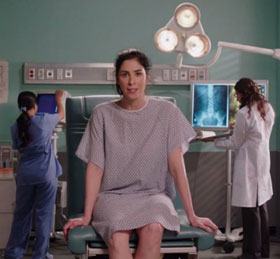 On the much more ridiculous and oblivious end of the spectrum we have Sarah Silverman’s “joke” that all she needs is a penis to stop making 78 cents to every man’s dollar. Nevermind that if she actually lived as a woman with a penis, her work would result in less money and more “harassment forever.”

Then there’s the astounding ignorance displayed by feminist writer Caitlin Moran when she described her young self in her memoir as having the “joyful ebullience of a retard.” There’s probably nothing less intersectional than employing a slur against an entire demographic of mentally disabled women. But White Feminism as a whole just doesn’t care about that.

Thankfully any privileged feminist can avoid being a White Feminist with one simple action — listening.

Listen to other women. When a woman who is unlike you says that she experiences something that you don’t, don’t discredit it as a non-feminist issue. Ask to learn more; embrace the opportunity to explore a worldview you’ll likely never experience. Then believe them when they say that their issues are important to feminism.

Incorporate the experiences of women unlike yourself into the work that you do. Don’t be a Sarah Silverman; think of the trans women. Also, listen to yourself. If you find that you criticize women of color more often for expressing their sexuality (or anything else), take note. Self-reflect to see if you’re engaging in some unintentional racism.

Finally, listen to criticism. If someone says a word you’re using is harmful, or that you’ve unknowingly dissed an entire group of people, take it in stride. It’s not about shaming you for your privilege, it’s about acknowledging what fell out of your scope with the hopes that you’ll notice it next time.

I won’t pretend it’s easy to be an intersectional feminist. It can be hard to take all the experiences of all different kinds of women into account… but it’s not impossible, and it is worth it. It makes things easier for all women in the long run. And when we’re not stepping on each other’s toes, we can work more swiftly to burn down the patriarchy together.

Let's Take a Deep Dive Into What It Means to Identify as 'Two-Spirit'
25 Essential Drag Queen Films Every 'Drag Race' Fan Needs to See
This Week We're Swooning Hard Over 'The Batman' Star Zoë Kravitz
'Am I the Assh*le?' Outrageous Queer Wedding Moments Edition
English