Written by Matt Keeley on October 6, 2017
Be first to like this.

The newest Wolfenstein video game is being criticized by the alt-right (or as we like to call them, “white nationalists”). Specifically, they’re objecting to a tweet which included the phrase “Make America Nazi-Free Again” and its #NoMoreNazis hashtag:

A number of alt-right idiots have complained to Bethesda, the creators of the new game.

Yeah well I wasn't about to play a game about endlessly killing white people anyway. GTA San Andreas is more my speed.

Sheesh get your politics out of my games yeeeeeesh man.

One of our “favorites” is this one, which has since been deleted: 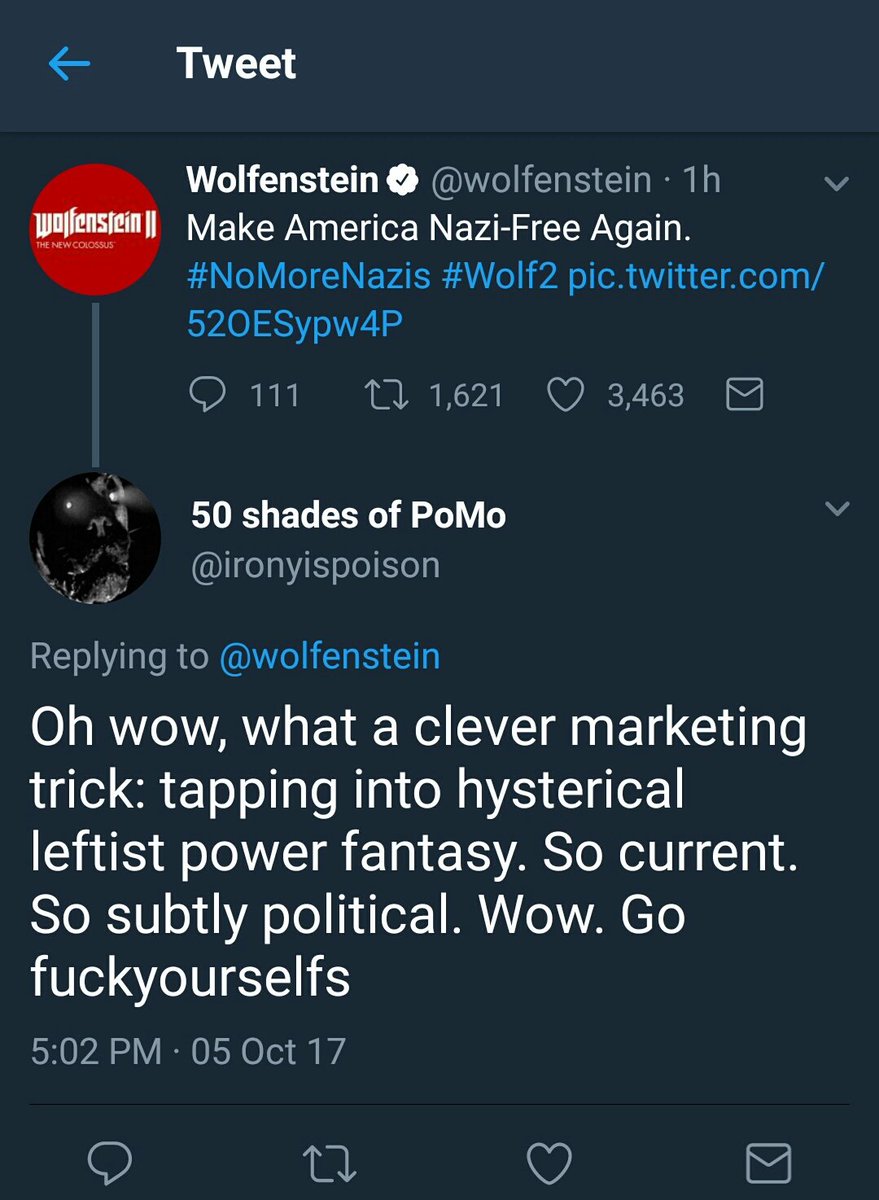 Strangely, for a group that grew out of Gamergate and 4chan, the alt-right isn’t up on their gaming history.

Across the 11 Wolfenstein games, one thing has remained the same — the general story. In the games you play as B.J. Blazkowicz, an American spy. Your enemy: The Third Reich. Admittedly, it’s not always been the most historically accurate — at the end of Wolfenstein 3D, you literally kill Hitler in a robot suit.

RELATED | Gay Nazi Scum Has Found a Home in Dark Corners of Tumblr, and We Should All Speak Up

Though the later games have delved more into a Man In The High Castle-style bit of alternate history, the Nazis have always been the bad guys in Wolfenstein.

In fact, the newest game, Wolfenstein II: The New Colossus, takes place in an alternate universe where the Nazis won WWII. This game is set in 1961, in Nazi-occupied America — hence the slogan “Make America Nazi-Free Again.”

Of course, it just so happens that the slogan happens to mirror the current state of America and hints at the Trump election slogan, “Make America Great Again.” And that’s one of the reasons we love this campaign. Thankfully, we’re not the only ones — though a number of Nazi-sympathizers have come out of the woodwork to complain, there are also some great tweets praising Bethesda.

I bet somewhere out there, some dude has watched a movie like Inglorious Basterds and was like: "Fucking antifa sjw's made this movie"

It seems like some of the people in these replies are füherious over killing Nazis.

I suck at Bethesda games but I'm getting this game because, as we all know pic.twitter.com/x9uMuMxhcO

I did alt-right this coming.