In a story that is sure to warm even the most cynical hearts, the first lesbian couple to be wed – in the entire world – is celebrating their 10 year wedding anniversary on April 1. The couple, Helene Fassen and Anne-Marie Thus are from Amsterdam, and are quite the inspiration.

“We married for love, not politics. But of course we were aware it was an historic moment,” says 41-year-old Anne-Marie, who is a notary assistant and gay rights campaigner. They decided to tie the knot in front of the world’s press, in order to use their love for good. They realized that this was a big deal, and that they had to show the international community that true love can and does exist in same-sex couples. 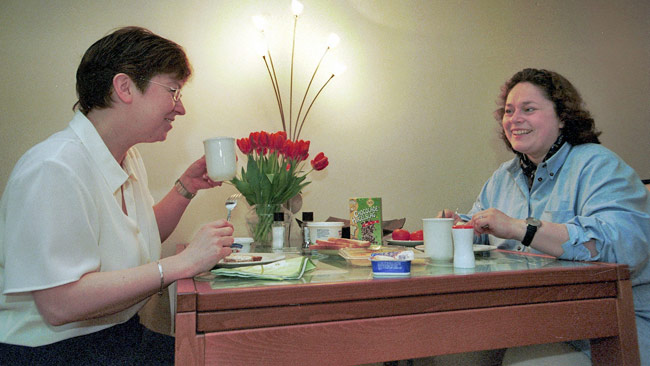 “We wanted to make other people think about how horrible it is to be denied something that is a natural right for others,” said the other half, 44-year-old notary Helene Faasen. “A heterosexual person never needs to think about whether he is allowed to marry or not, he simply needs to be lucky enough to find the love of his life.”

Holland was the first country in the world to legalize gay marriage, back in 2001. Since then, over 15,000 gay couples have been married. That is about 2% of total weddings, according to local statistics.  The oldest LGBT rights organization in the world is also located in Amsterdam, and estimates that there are 1 million LGBT-identified citizens out of a total population of 16.7 million.

The women have two children, born of anonymous sperm donors, and live an altogether normal life.” Like many other people, we have a family, work, a house, a dog and two rabbits,” said Anne-Marie. “In the mornings, we also have to nag our children to get out of bed and eat breakfast … it is all very normal.”

“It is not the Sodom and Gomorrah many people apparently expect to result from the legalisation of gay marriage,” continues Helene.

The women met on a blind-date in 1998, and have been together ever since. Their children accept their lives as “just one of many options that exist,” and are incredibly supportive of their mothers’ lives.

The success of this couple’s marriage puts the continued struggle for acceptance in stark relief. Gay marriage is still illegal in most countries and homosexual sex is forbidden in some states – and punishable by death in places like Iran. There are rising instances of homophobia across the board – as can be seen in this gay man’s beating in New York’s West Village. The ironic thing about increasing acceptance is that this visibility makes it easier for LGBT people to be targeted.

Even in the Netherlands, one of the most liberal countries in the world, homophobic attacks have actually increased in the years since gay marriage was legalized. In 2009, there were 428 incidents, with nearly one fifth of them bringing violence along with verbal abuse. This is a 13 per cent increase over 2008!

Other indicators that the Dutch are not as liberal as they seem in the global press: nearly 50% of people polled find it objectionable to see two men kissing in public; seven out of ten LGBT people have experience verbal and/or physical abuse in their lifetime.

For Helene and Anne-Marie, these are just more reasons to continue to stay visible and keep fighting.

We were lucky that others had taken up the fight and made it possible for us to get married,” said Anne-Marie. “If other people need us now, especially in countries where it is not yet legal, we want to be there for them.”

What do you think about the increased homophobia in such a liberal country?

(Photos via the AP; story via News.com.au)