Written by Daniel Villarreal on March 4, 2015
Be first to like this. 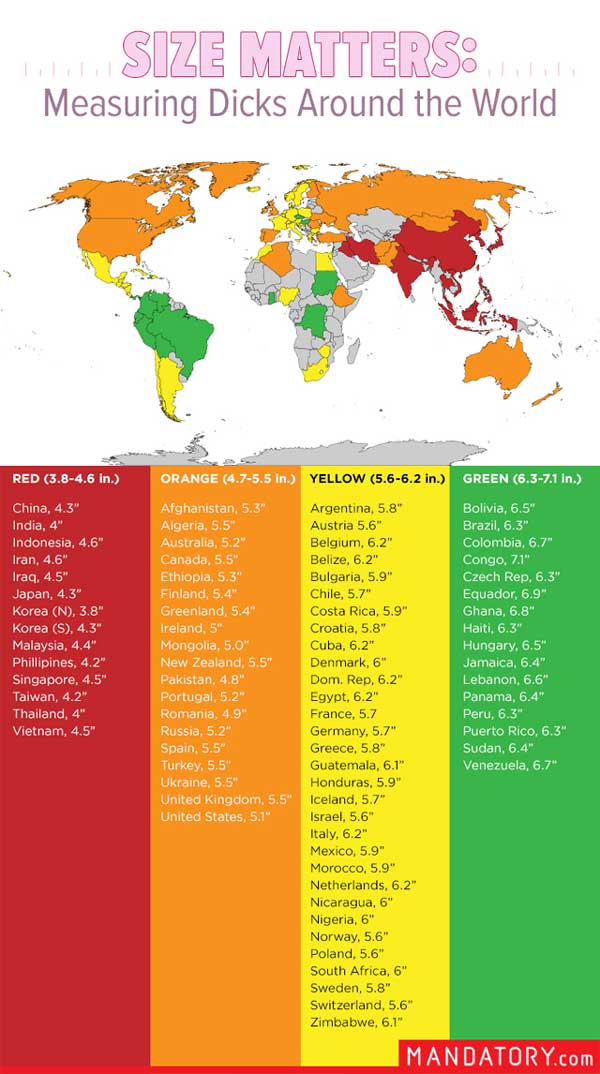 Every year or two we get a new infographic purporting to show rank countries by dick sizes. The most recent graphic comes from the click-bait site Mandatory.com, but folks are already criticizing it for perpetuating racist pseudoscience and bad methodology.

Most of the data for Mandatory’s infographic came from studies where guys self-reported, and as The Daily Dot points out, “In scientific studies, self-reporting is extremely unreliable… Some studies have even shown that men perceive their own penises to be smaller than they actually are.” That’s counter-intuitive; you’d think most guys would exaggerate their penis size a la “internet inches” rather than underestimate it.

More importantly though, one of the studies that Mandatory.com used was founded on the thoroughly debunked work of J. Philippe Rushton, a “race realism” scientist who concluded (somewhat arbitrarily) that “African men have the smallest brains and the largest penises, whereas Asian men are the opposite.” He also concluded that small penises develop in cultures that promote “altruism and cooperative behavior,” whereas large penises develop in cultures that promote “inter-male aggression and criminality.”

Instead, you should take a look at a study recently published in the international journal of urological surgeons which measured over 15,000 penises from men in the U.S., Europe, Africa, and Asia. It found that the world average is 5.16 inches long and 4.6 inches around when erect. While it doesn’t break out penis sizes by nationality, it suggests that dick sizes might be a lot more evenly dispersed than shown by Mandatory’s chart and a lot less racially determined than we’d been lead to believe.