Your Cell Phone Is Killing You 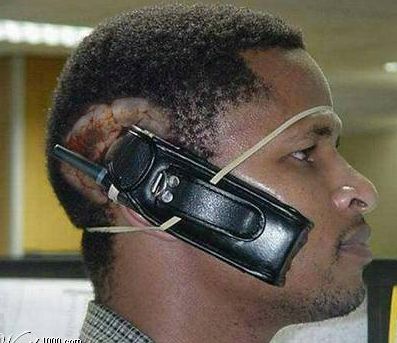 …but only as much as lead, engine exhaust, and chloroform. So there’s that.

What that means is they found some evidence of increase in glioma and acoustic neuroma brain cancer for mobile phone users, but have not been able to draw conclusions for other types of cancers

“The biggest problem we have is that we know most environmental factors take several decades of exposure before we really see the consequences,” said Dr. Keith Black, chairman of neurology at Cedars-Sinai Medical Center in Los Angeles.

The type of radiation coming out of a cell phone is called non-ionizing. It is not like an X-ray, but more like a very low-powered microwave oven.

“What microwave radiation does in most simplistic terms is similar to what happens to food in microwaves, essentially cooking the brain,” Black said. “So in addition to leading to a development of cancer and tumors, there could be a whole host of other effects like cognitive memory function, since the memory temporal lobes are where we hold our cell phones.”

The cell phone industry immediately went on the defense today, stating the WHO’s study “does not mean cell phones cause cancer.” Um…They did read the study, right? The exact words were “participants in the study who used a cell phone for 10 years or more had doubled the rate of brain glioma, a type of tumor.”

Children are at an even greater risk of cancer from cell phone use, as their skulls are thinner.

For what it’s worth, the Apple iPhone 4 manual recommends “When using iPhone near your body for voice calls or for wireless data transmission over a cellular network, keep iPhone at least 15 millimeters (5/8 inch) away from the body.” Blackberry instructions recommend an even greater distance of .98 inches.

Right. Because that’s how people use their phones – by holding it an inch away from their heads.

Cell phones are cooking up cancer in your brain. Don’t say we didn’t warn you.