Your iPhone Has Been Tracking Your Every Move Since June 2010

If you are an iPhone user, your every single move has been tracked internally – without your knowledge – since the June 2010 iOS 4 release.

Watch a Year in the Life of Nick and His iPhone:

Apple has not responded to the growing furor over this unauthorized surveillance. We are not sure why they would have included this in their iOS 4 update, although perhaps it has something to do with trying to track stolen iPhones. I know that the iPhone 4 has complimentary tracking, so that you can try to find your phone if it is lost or stolen.

The two researchers, Alasdair Allan and Pete Warden, discovered this tracking file and have made a program available so anyone can track their iPhone movement since June of 2010. The same file exists on any 3G-enabled iPads as well.

Cell phone providers collect similar data almost inevitably as part of their operations, but it’s kept behind their firewall. It normally requires a court order to gain access to it, whereas this is available to anyone who can get their hands on your phone or computer.

By passively logging your location without your permission, Apple have made it possible for anyone from a jealous spouse to a private investigator to get a detailed picture of your movements.

One guess might be that they have new features in mind that require a history of your location, but that’s pure speculation. The fact that it’s transferred across devices when you restore or migrate is evidence the data-gathering isn’t accidental. 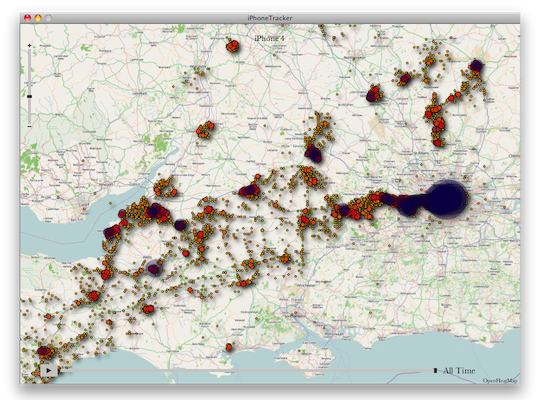 It’s really trippy to watch a year of your life pass by. At first, it’s truly creepy to zoom in on your data and find how chillingly accurate it is.

And then you start to realize that you have been carrying around a hi-tech tracking device for almost a year, with data that could have been accessed by anyone, anywhere. Normally, the government would require a subpoena to get that data from a telecommunications company, but with this all they’d need to do is get ahold of your iPhone.

I don’t have anything to hide, so I think this is actually kind of a cool little functionality. It’s a secret diary that functions independently of the location-based services that use GPS. I think that there are going to be some cool mash-ups with this one!

Do you think this iPhone tracking is creepy or cool?

CNN goes in depth with the iPhone tracker:

It's Been 243 Years Since the First Man Was Thrown Out of the Army for Being Gay
Men Who Love Men But Who Don’t Want to Be Called ‘Gay’ Are Now Opting for This Label Instead
7 Important Facts About Gay and Bi Men Who Suffer From Eating Disorders
Provincetown, America's Favorite Queer Beachside Resort, Has a Full Calendar of 2022 Events
English