Written by Daniel Villarreal on July 25, 2016
Be first to like this. 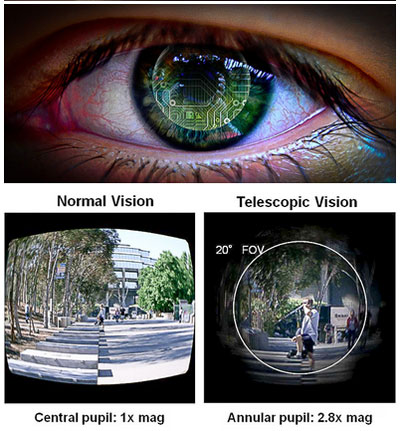 Opera glasses are so passé. If you want a closer look at an onstage musician, yellow warbler or bikini butt,  just zoom in with telescopic contact lenses. There must be a lot of people out there saying “damn, I wish I hadn’t gotten that Lasik surgery.”

The high-tech contact lenses work in tandem with a pair of glasses that magnifies the lens power up to 2.8 times when you wink your right eye and then returns to normal when you wink your left. You may end up looking like you have a twitch or are aggressively flirting, but you will be as cool as a Glasshole.

They’re made from “several precision cut and carefully assembled pieces of plastics, aluminum mirrors, and polarizing thin films” giving you the visual power of a bionic cyborg without all the messy humanoid wiring.

Research for the lens was funded in part by the U.S. Military Defense Advanced Research Projects Agency (DARPA), the same folks who brought us the nightmarish Wildcat robot. And though they’re not yet available for sale, they eventually will be, joining an entire market of sight-based consumer electronics including the Oculus Rift, Google Glass, and Microsoft HoloLens.

One can even envision a future when cybernetic-enhanced optics allow us to record everything we see and augmenting reality until life becomes a nonstop social media where everything is merely a video game in your larger quest for status. In fact, here’s a small movie that’ll give you a taste of what to expect. And you though cyberpunk was going out of style.