Meet The Republican Who Wants To Wipe Out Net Neutrality

Written by Daniel Villarreal on March 6, 2015
Be first to like this. 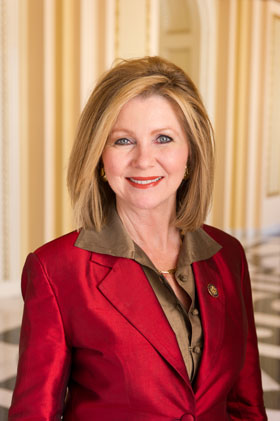 Late this last February the Federal Communications Commission passed sweeping net neutrality regulations to ensure that internet service providers can’t block or throttle anyone’s internet traffic. So naturally it was only a matter of time before a telecom-financed Republican and her cronies introduced legislation against the FCC’s ruling.

Meet Marsha Blackburn, she’s a Tennessee Republican in the House of Representatives who authored the pleasant sounding “Internet Freedom Act”. All the two-page legislation sets out to do is “prohibit the Federal Communications Commission from reclassifying broadband Internet access service as a telecommunications service and from imposing certain regulations on providers of such service.”

If you’ll recall, the FCC’s reclassifying of internet access as a telecommunications service basically means that Verizon, AT&T and other service providers have to treat all information moving through their network as the same, the same way that they treat phone calls — they don’t prefer that some calls reach you and others don’t. They’re legally required to treat all calls as the same and to give you access to each and every one as long as you pay your bill.

Blackburn’s bill would undo all that and leave future regulation at the hands of Congress. Her bill already has 31 co-sponsors (all Republican), and she has also introduced legislation to overturn the FCC’s other historic decision which prohibits states from blocking cheap internet access solutions created by cities and counties — that one is less deceptively named the “States’ Rights Municipal Broadband Act of 2015.”

The publication Ars Technica points out that Blackburn’s donors include an AT&T political action committee that gave her $25,000, a Comcast and cable industry PAC that gave her $20,000 each, and Verizon who put $15,000 into her kitty.

But before you get too frightened that Blackburn’s plan will gain much traction in the Republican-led Congress, you should know that Republican voters overwhelmingly favor net neutrality as do huge American tech companies like Microsoft, eBay, Facebook, Google and Amazon. The real battle will be fought in the courts as Verizon and other telecoms try to challenge the FCC’s authority to regulate broadband in the first place.

So passing a bill to ruin the internet won’t be easy, and if they try, Republicans will certainly pay a high price for the attempt.

The Bechdel Test Is the Bare Minimum for Gender Equality On-Screen ... and Hollywood Is Still Failing It
46 Trans People Have Been Murdered in America in 2021
New Gang of Four Tribute Album 'The Problem of Leisure' Honors Punk's Greatest Guitarist
We're Dying for a Live-Action Zelda Movie, So Why Hasn't It Happened?
English