Written by Matt Keeley on September 18, 2015
Be first to like this.

Last Friday was 9/11, and for most people it was a somber day of reflection. But for Jerry Casale, DEVO’s bassist, singer and co-songwriter, it was a happy occasion as he got married to Krista Napp… with a 9/11-themed wedding. Oh, no! The wedding cake was the Twin Towers with Jerry and Krista’s faces on them, and guests were given boxcutters as party favors. DEVO’s always had a dark sense of humor, so while this might not be necessarily expected, it’s not a total shocker to fans, either.

Concerts aren’t always safe spaces for women; W00dstock ’99 is usually the standard bearer of what concerts should not be, with its high level of sexual assaults, but it’s not uncommon for women to be groped in the mosh pit at many shows. Thankfully, the band Speedy Ortiz is making sure their concerts are safe — they’ve even set up a hotline for people who need help at their concerts. 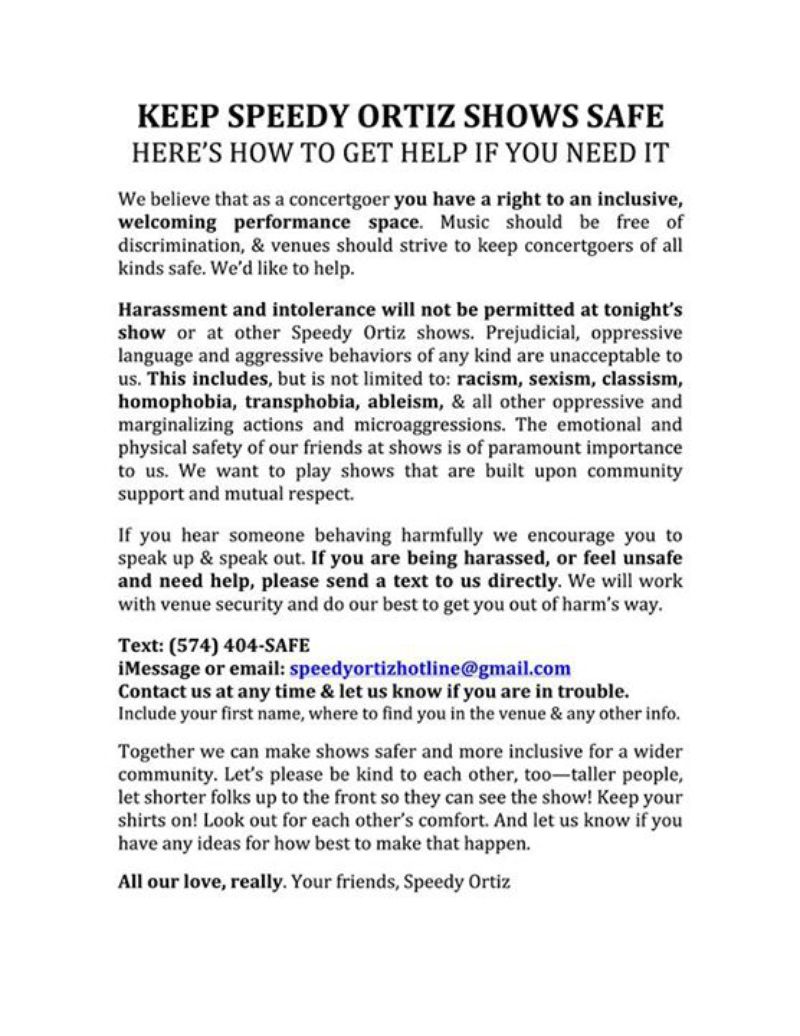 Hopefully, more bands will work to help make their shows safe places for everybody.

Not too long ago, we told you about how Ryan Adams was working on a full-album cover of Taylor Swift’s 1989. Well, this Thursday, Adams announced the release date — Monday! — and shared the first full song on Apple’s Beats1 Radio, “Bad Blood“. He also shared the album art on his Instagram feed:

Speaking of albums named after years, cartoonist Keith Knight (of The K Chronicles and (Th)ink) has been doing comics about brilliant albums for Medium. His most recent is a look at Prince’s seminal album 1999. Knight has also done a strip about Songs In The Key Of Life by Stevie Wonder.

We do like old media formats on Now Hear This; last week, we talked about Technics turntables coming back, and now Bloomberg Business has this great video touring the last factory that still makes audio cassettes. Sure, the attempted cassette culture revival seems a little weird — tapes… aren’t that good, you guys — but who doesn’t love watching factories make things?

Mathrockers Battles have their newest, La Di Da Di; unlike their popular Gloss Drop, there aren’t any guest vocalists on this one.

Chris Cornell of Soundgarden has a new album, Higher Truth, his first studio album since the Timbaland-produced Scream, back in 2009.

The Grateful Dead are putting out 30 Trips Around The Sun, an eighty disc box set. If you’re too much of a wuss for that, there’s also a four-disc version available.

Avant saxophonist John Zorn has a new album on his own Tzadik label, Inferno.

10 Film Actors Who Had the Balls to Go Full-Frontal On-Screen
Our 'American Psycho' 30-Product Personal Grooming Regimen Is Killer
Secrets and Adorable Details Are Hidden in the Anime Classic 'My Neighbor Totoro'
Kink at Pride: The Ongoing Discourse That Needs to End
English