Godwin’s Law, for those of you too sensible to spend time arguing online, is a rule of internet communication that goes like this: “As an online discussion grows longer, the probability of a comparison involving Nazis or Hitler approaches 1.” In other words, if two people argue on the internet long enough, one of them will compare the other to Hitler. When that happens, the discussion is over, for it’s obviously not going to go anywhere productive.

But Godwin’s Law was meant for petty arguments over nerdy topics like “Who would win in a fight: Unicron or the Death Star?”* and “Which actor was the best Batman?”* Godwin’s Law is meant to poke fun at melodramatic netizens’ use of hyperbole. It falls apart though when a person legitimately spouts political ideology similar to that of the Nazis.

Recently, leading GOP presidential candidate Donald Trump suggested forcing America’s Muslims to register with a special database and carry special identification paperwork, like the Nazis literally did to the Jews (along with other ethnic and cultural minorities).

America’s panicky, Islamophobic treatment of Muslims following the horrifying terrorist attacks in Paris has become so extreme that it has drawn a response from the U.S. Holocaust Museum, which released a statement urging the nation to tone it down, for fuck’s sake.

The ID badge issue isn’t The Donald’s only resemblance to Der Führer; a little while ago, Trump’s official Twitter account disseminated an inaccurate bit of propaganda created by an honest-to-god neo-Nazi.

Trump’s hateful rhetoric has ugly real-world effects. At a recent rally for the candidate, a black protestor was beaten and choked by an angry mob. Back in August, two Trump supporters, perhaps inspired by the Donald’s anti-Hispanic rhetoric, beat a homeless man with a metal pipe because they believed he was an illegal immigrant.

Comparing a Val Kilmer fan to a Nazi is absurd and hyperbolic; it’s a perfect example of Godwin’s Law. But comparing an imbalanced, xenophobic politician whose totalitarian rhetoric inspires his followers to beat and choke religious minorities to Hitler? That’s reasonable.

Even Mike Godwin, the man who coined Godwin’s Law, agrees with the comparison. On Facebook, he recently shared a video of a man performing a song called “Donald Trump Is Literally Like Hitler.”

That’s why we at Unicorn Booty believe that it’s time to suspend Godwin’s Law for a while. We can bring it back when politicians and their supporters stop acting like actual Nazis. 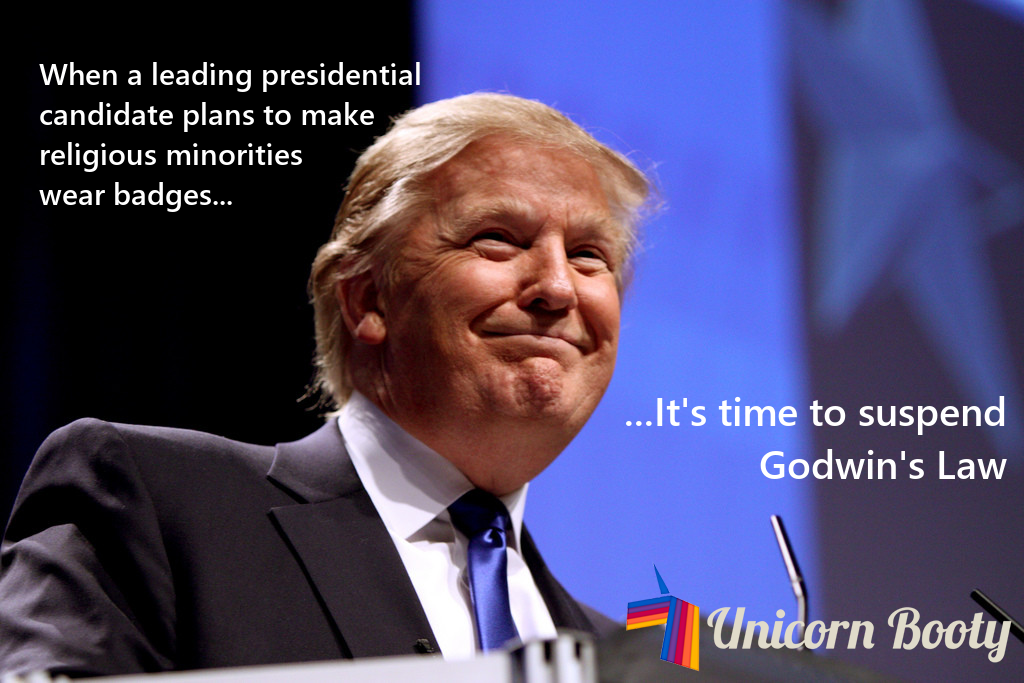 *answers: the Death Star and Adam West. Fight me.

We're Celebrating Dolly Parton's Birthday With 5 of Her Most Brilliant Covers
Keiynan Lonsdale: 5 Reasons We're Currently Swooning Over the Queer Aussie Stud
We've Rounded Up Some of Our Favorite LGBTQ Etsy Shops and Artists
A Peek Under the Towel: Inside the 500-Year History of Gay Bathhouses
English