Apple Features SPACES as ‘App of the Day’

WEST HOLLYWOOD, June 26, 2022 — SPACES, the new group chat app for queer communities, is proud to announce that it has been featured as ‘App of the Day’ by the App Store. An accomplishment for any app, SPACES is especially proud to be featured so soon after its March 1 launch, and on Pride Sunday, a day commemorating the anniversary of the Stonewall Uprising. 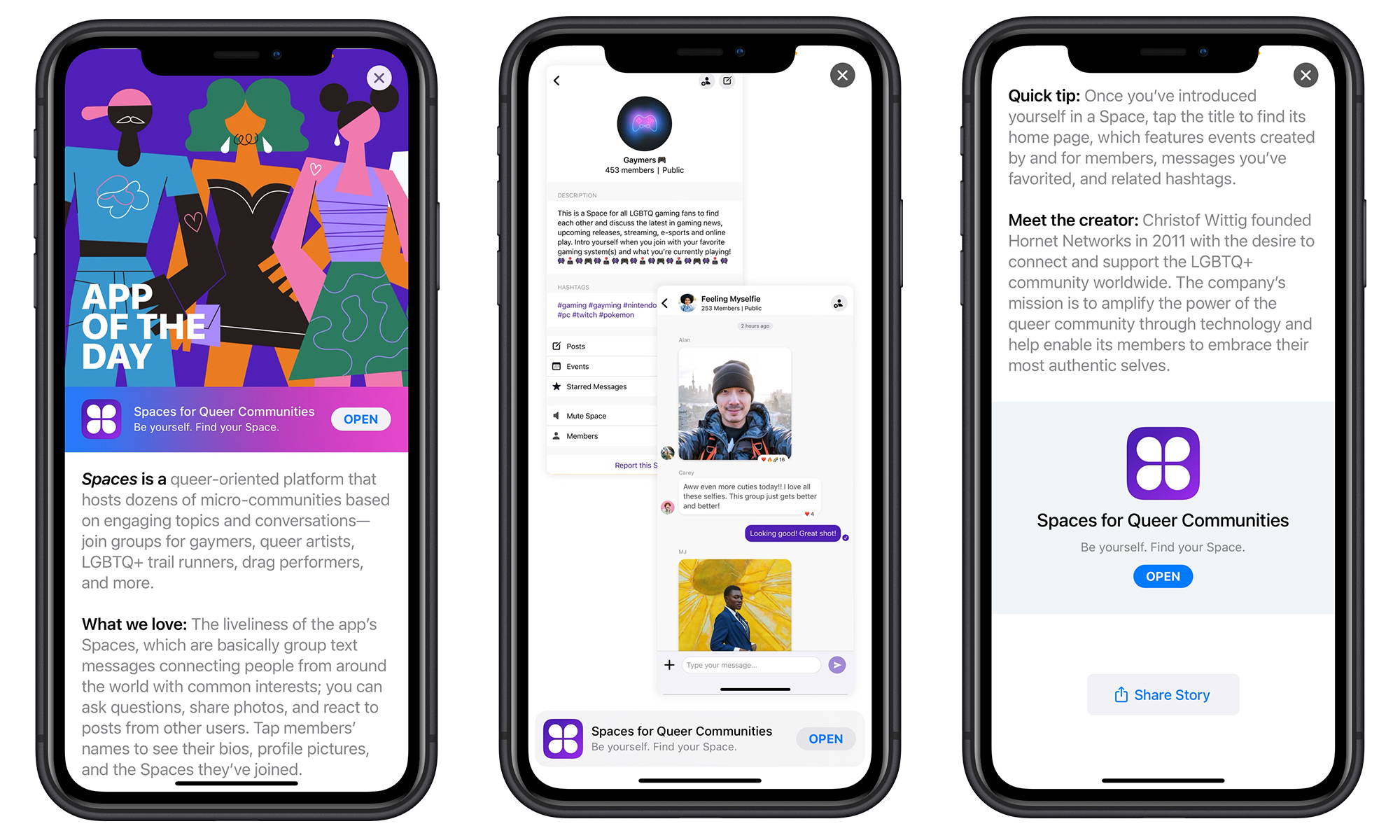 The SPACES App Store feature loves “the liveliness of the app’s Spaces, which are basically group text messages connecting people from around the world with common interests; you can ask questions, share photos, and react to posts from other users.”

Apple also calls out the diversity of communities that already exist in the app, including gaymers, drag performers, and queer artists and athletes.

“We’re proud to receive this stamp of approval from the App Store, and it’s a testament to our team’s hard work,” says Christof Wittig, co-founder and CEO of Hornet Networks. “Also, we’re thrilled that Apple appreciates the importance of our mission — to build a world where queer people can find a safe space to be themselves — which is more important than ever today, as we watch heteronormative social media platforms shirk their duties to protect our community.”

On June 1, the first day of Pride Month 2022, Hornet Networks published a 10-point Safety Pledge to always use its platforms to keep the LGBTQ+ community safe.

For more info and to download SPACES on iOS, head to spaces.hornet.com.

Hornet Networks is the world’s leading queer tech company, providing a digital home for LGBTQ+ people to connect with each other — anytime, anywhere. Amplifying the radical, affirmative power of the queer community with cutting-edge technology, Hornet serves an LGBTQ+ audience with two distinct apps: the queer social network Hornet, with over 35 million users worldwide, and the recently launched Spaces, a group-chat platform for queer communities to connect over shared interests.

'Being the Ricardos' Grants Lucille Ball the Silver Screen Legacy That Should Have Been Hers
Nearly 30 Years Ago, This ‘X-Men’ Comics Storyline Was a Powerful Allegory for HIV
We're Dying for a Live-Action Zelda Movie, So Why Hasn't It Happened?
Here's What We'll Be Watching on Disney+ Over the Holidays
English