Why Are People Saying French President Emmanuel Macron Is Gay?

Emmanuel Macron is once again having to deny silly rumors that he is secretly gay.

In July Le Monde posted a video of presidential bodyguard Alexandre Benalla assaulting protestors at a May Day demonstration. In one clip he is seen pinning a woman to the ground, while in another he hits a demonstrator repeatedly.

That video sparked a public outcry — in part because Benalla was wearing police gear at the time, even though he wasn’t an officer. Further investigation revealed he had been passing himself off as a deputy to the Immediate Office of the President, a much more prestigious and powerful role than security guard, and lived at the presidential palace, where he reportedly enjoyed a company car and outsized salary.

Following the incident an Emmanuel Macron spokesperson insisted Benalla was only supposed to “observe” police in action and had been put on 15 days’ unpaid leave and reassigned to desk duty. But when pictures surfaced of Benalla with Macron through May and June, it only added fuel to the fire — and led to questions as to why this loose cannon was being treated with kid gloves.

Benalla was ultimately fired, but not before rumors began circulating that he and the French president were having a gay love affair. Macron actually had to denounce the allegations, saying “Alexandre Benalla [has never] been my lover.”

And this isn’t the first gay rumor about Emmanuel Macron. Last year the French leader, who married wife Brigitte in 2007, had to dispel rumors he was having it off with Radio France honcho Mathieu Gallet. “I am who I am, I have never had anything to hide,” Emmanuel Macron said. “I hear people saying that I have a secret life or something. It’s not nice for Brigitte and because I share all my days and nights with her, she asks me how do I manage it.”

He made light of the situation, adding that, “If you’re told that I have a double life with Mathieu Gallet or anyone else — then it’s my hologram that suddenly escaped, but it can’t be me.”

And then there’s the ongoing bromance between Emmanuel Macron and Canadian Prime Minister Justin Trudeau. The two 40something statesmen have always been affectionate in public — hugging, kissing and walking with each other’s arms around their backs. In a photo from the U.N. summit this week, Macron can be seen staring moon-eyed at his Canadian counterpart.

“We have an extremely close convergence of views,” Macron has said of Trudeau.

The two appeared so chummy during their first meeting in Teorama, Sicily, that the press joked they had gone to the picturesque Italian city for their gay wedding.

Of course, at one point Emmanuel Macron was also rather cosy with Donald Trump, but the U.S. president’s anti-European policies have since chilled their relationship.

Could 45 be pushing Emmanuel Macron into another man’s arms? Oh, l’amour!

Do you wish someone looked at you the way Emmanuel Macron looks at Justin Trudeau? 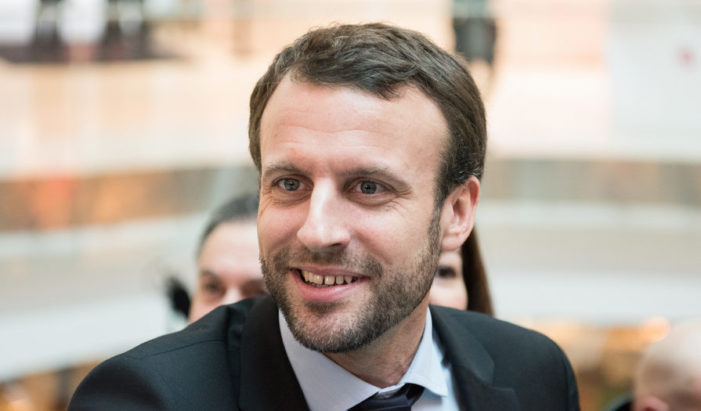