This Week White Supremacy Invaded the Most Sacred of Spaces: The ‘Jeopardy!’ Stage

Written by Zeynep Sasmazel on April 29, 2021
Be first to like this.

Jeopardy! contestant Kelly Donohue was the reigning champion of the game show on three nights. During the show’s introductions segment on April 27, he made a white supremacist gesture on national TV — the now-co-opted sideways “OK” sign — three fingers stretched out over his chest while his thumb and index finger touch. He tapped his chest with the symbol.

This gesture is classified as a hate symbol; and it is used by both white supremacists (as representing the letters “wp” for “white power”) and Three Percenters (who are defined by the ADL as “right-wing extremists but who are not typically white supremacists”). And as many despicable things often do, the white supremacist hand gesture began as a troll campaign on 4chan in 2017.

Check out the Anti-Defamation League’s explanation of how the gesture went from trolling campaign to hate symbol here.

Of course, it’s also still used as a plain old “OK” symbol by some! Absolutely. Though most folks tend to flash the “OK” rightside up — not in a bizarre sideways manner against the chest like Donohue presented it, which is the more common display among Three Percenters.

Maybe Donohue was making this gesture to signal his number of wins, right?

Remember that scene in Inglourious Basterds?

Let’s just say this was one big misunderstanding, and we’ll give Donohue the benefit of the doubt. Put yourself in his shoes. Now you have a number of concerned viewers wondering if you’re a white supremacist. What would you do? Make a public post firmly denying these rumors, denouncing white supremacy and expressing your disgust toward alt-right extremism? That seems like the most logical and appropriate move here, no?

But that’s not what Kelly Donohue did. In fact, that’s not even close to what Donohue did. The statement he posted on Facebook (now deleted) was lukewarm at best. He did not disavow white supremacy or fascism. In fact, he did not even mention those things. 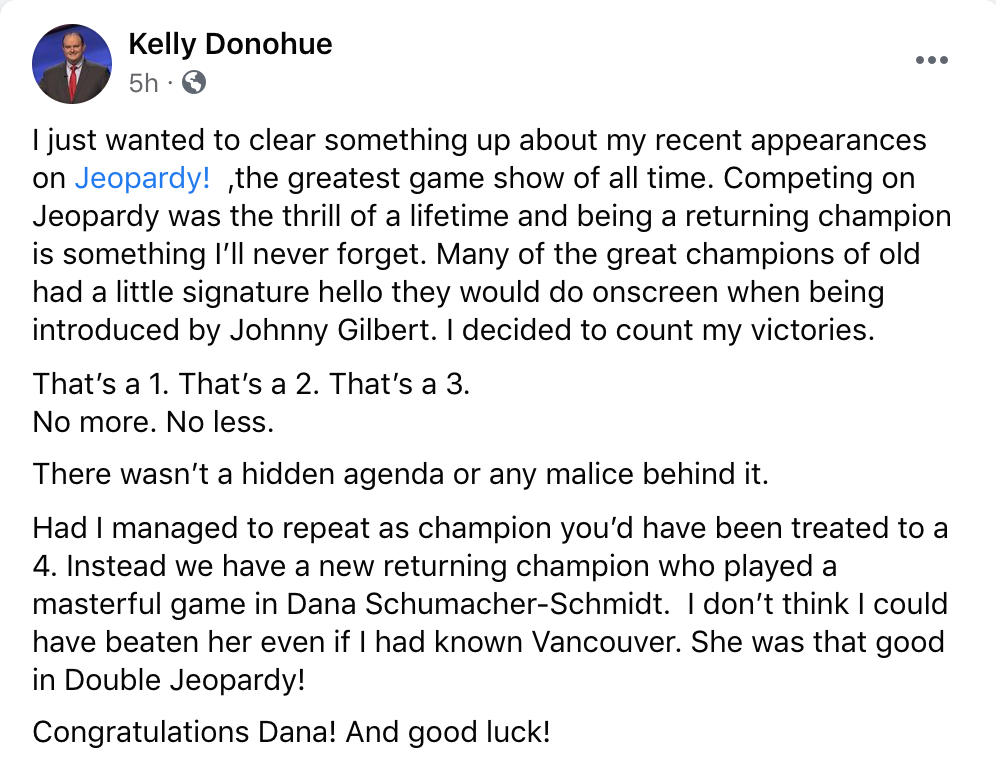 “There wasn’t a hidden agenda or any malice behind it,” he posted on Facebook.

The easiest, most straight-forward thing to do here would be to condemn racist ideology. It would take less words than what he posted.

White supremacists and alt-right extremists are known for using irony and humor to effectively avoid consequences. A light-hearted, breezy approach to seriously disturbing topics makes opponents of fascism seem like we’re overreacting. (You know, like when the CPAC stage is clearly and intentionally in the shape of a rune symbol used by neo-Nazis.) These tactics are especially effective when weaponized against (or to incite) young people.

Then we have the comments on Kelly Donohoe’s Facebook post, which (though now deleted) prove to be quite illuminating.

It appears someone found a record of Kelly Donohue’s campaign donations: “4 consecutive years of Trump donations are pretty firm evidence of his views. FEC records are public. There’s no doubt this guy is white supremacist scum.”

Anneke Garcia, a former Jeopardy! contestant, explained Donohue’s responsibility here pretty succinctly: “Kelly, I don’t know you and as a fellow contestant I would like to give you the benefit of the doubt, but if you don’t speak up publicly right now and disavow any possible glimmer of white supremacist meaning that your hand signal evoked, you’re going to get a huge public reckoning for the type of speech you just put out into the world.

If you cannot categorically condemn what it looks like you were suggesting, you’re going to deserve every bit of outrage that every person of color in this show’s history is about to send your way.”

As of now, a group of nearly 600 former Jeopardy! contestants have issued an open letter demanding an apology from the show’s  producers for not catching Kelly Donohoe’s white supremacist gesture.

For what it’s worth, Kelly Donohoe has since issued a new apology condemning white supremacy:

I’m truly horrified with what has been posted about me on social media.  I absolutely, unequivocally condemn white supremacy and racism of any kind.  People who know me personally know that I am not a racist, but for the public at large it bears repeating: I am not a racist and I reject and condemn white supremacy and all forms of bigotry for the evil they are. It’s shameful to me to think anyone would try to use the stage of Jeopardy! to advance or promote such a disgusting agenda. During the taping of my fourth episode, I was simply raising three fingers to mark my 3rd win. There was nothing more I was trying to indicate.

I deeply regret this terrible misunderstanding. I never meant to hurt a soul and I assure you I am no friend of racists or white supremacists.

I removed the previous post because the comments were more than I could bear. I stand by the statement itself and you can find it reported in other media.  I did, however, understand the fair criticism that I did not include a forceful condemnation of white supremacy in my initial statement. I hope my feelings on that matter are clear now.

Kelly Donohoe is sticking to his guns: It wasn’t a white supremacist gesture but an attempt to celebrate his three wins, he says. Some will surely believe him; others will find it hard to believe this Trump supporter and repeat-campaign-donator — called-out by friends as a die-hard MAGA fan — wasn’t aware of this very specific hand gesture when he tapped it against his chest on national television.

What do you think about Kelly Donohoe and his alleged white supremacist gesture on Jeopardy!?

This Week We're Swooning Hard Over 'The Batman' Star Zoë Kravitz
Did 'Animaniacs' Have Surprising Queer Elements Hiding in Plain Sight All This Time?
Not To Be Missed: Ryan Murphy's 'Halston' Comes to Netflix This May
In the Early 1950s, U.S. Feds Tried to Kill the First Gay Magazine
English