Don’t Be Dumb at Brunch: The New Kim Davis, Chick-fil-A and Summer Sausage

Written by Paul Katami &amp; Jeff Zarrillo on August 5, 2018
Be first to like this.

Happy Sunday! It’s brunch time. Don’t be Dumb. This week, we cover Yelp’s plan to let you know in advance if you’re truly welcome. Plus, Trump’s star is falling both metaphorically and literally (well, maybe). A county clerk, who must want to be the new Kim Davis, is refusing to issue gays a wedding license. Plus, are you packing a bigger bulge in the Summer? Finally, we have our Whack Job of the Week; see who it is below.

In the “we can’t believe we have to do this” story of the week, Yelp is adding an “Open to All” under a restaurant’s “More business info” section which shows whether your favorite place is truly “open to all regardless of race, ethnicity, national origin, sex, religion, disability, sexual orientation, gender identity or gender expression.”

After winning marriage equality nationwide in 2015, the anti-gay right has moved on to “religious liberty” battles claiming that people that own a business can refuse service based on religious beliefs (think Masterpiece Cakeshop).

Companies can indicate their participation either via Yelp or with a sticker on their front door. Yelp said the goal is to “build awareness and understanding of the importance of nondiscrimination laws and defend the bedrock principle that when businesses open their doors to the public, they should be Open to All.”

After having been destroyed or defaced multiple times in the past, the West Hollywood City Council is considering a resolution to urge Los Angeles and the Hollywood Chamber of Commerce, which controls the Walk of Fame, to just remove Donald Trump‘s star once and for all rather than let it remain as a lightning rod it has become since his election. The reason for the resolution, which will be voted on August 6, goes beyond the ongoing maintenance issue of the star. It claims a laundry list of reasons for it’s removal — chief among them is Trump’s treatment of women. Other reason listed are his “separating children from their parents” policy, the trans military ban, the Russia investigation and more.

When the temperature is going up, you should be looking down. Apparently the heat brings some size to your meat and there’s science to prove it. It’s the difference your body makes when its surrounding environment is either warm or cold — ever have shrinkage getting into a cold pool or shower? The increased blood flow into your flaccid friend in response to the warmer weather gives it a bigger look. In addition you might get “Summer Balls” too. So — who’s moving to the desert?

Unless you were in a coma in 2015, you know that marriage equality became the law of the land once the Obergefell case was decided. That was it. Final. And if you’re a county clerk, you need to abide by this ruling and do your job by fulfilling the marriage license requests of same sex couples. Period.

But as we start seeing more and more government-supported attempts to carve away special religious rights, we hear more stories like this one about Laurel Eriksen, Montgomery County Courthouse clerk in Root, New York who denied a gay couple their license. At first, she used the excuse of them not making an appointment as all do but let it slip that she also has a deeply held religious objection to them being wed. Somehow we don’t think the appointment would have made a difference. But seriously, why would you even want to be the new Kim Davis? One is too many. 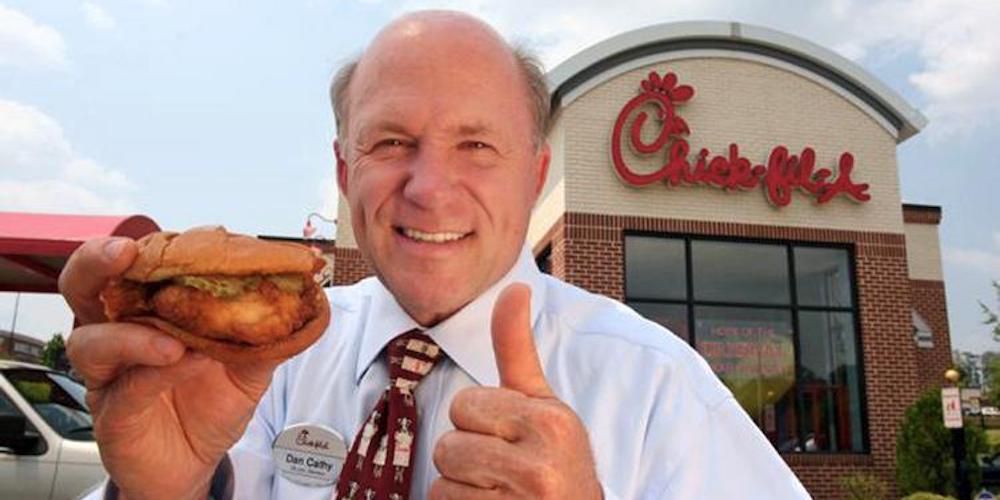 It still baffles us how anyone can go to Chick-fil-A, but it’s especially infuriating when anyone LGBTQ+ supports this company. It’s a proven fact that Chick-fil-A President and CEO Dan Cathy is anti-LGBTQ. He’s donated millions of dollars to hate groups and organizations that are against our basic human rights.

And just like any other bigot that won’t admit to being a bigot, he’s now accepting an offer to speak at the national conference for the International Economic Development Council (IEDC) which ironically has the theme of “inclusive economic development.” So hey — when you’re out there spending your dollars on Chick-fil-A, just know that they may be used against you and your endeavors to be a full citizen in the country you live. That should give you some heartburn.