Written by Stephan Horbelt on June 1, 2018
Be first to like this.

A litany of female adult film actresses will be speaking at the Los Angeles “Let Us Survive” Rally, taking place at 3:30 p.m. at Boardner’s in Hollywood. Also speaking is lecturer, therapist, TV co-host and Hornet’s regular sexpert Dr. Chris Donaghue, who has long been an advocate for the sex worker community. Adult film star Conner Habib will also be appearing.

French prostitutes are carted off to the Salpêtrière prison (Étienne Jeaurat, 1745)

Siouxsie Q, a coordinator of the event and APAC Secretary, says, “Sex workers have waited far too long for this moment, but time is officially up for the violence the United States government has brought to our workplace. The current administration has signed into law a piece of legislation [FOSTA/SESTA] that has taken away the most important tool our community had for survival in this country. We can stay silent no longer. Sex workers everywhere, allies, advocates and anyone who has ever enjoyed or profited from our industry: we need you to show up on June 2, and most importantly after June 5 and every election moving forward. Sex workers vote. We deserve better than the folks who are currently in office.” 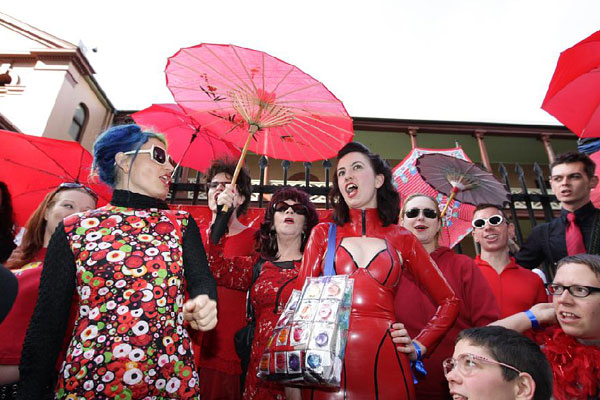 According to the event’s release, “Sex workers can be adult film stars, dominatrices, strippers, escorts, madams, exotic dancers, webcam models, phone sex operators and many other workers who engage in consensual sex work.”

Also from the event’s release:

International Whore’s Day commemorates the occupation of Église Saint-Nizier in Lyon, France, by more than 100 sex workers on June 2, 1975 in protest of their inhumane working conditions. Today the day is recognized via marches around the world to call attention to sex workers who face violence, discrimination, harassment, abuse, assault, detainment without due process and basic civil rights violations on a regular basis.

Sex workers are often denied housing, medical insurance, credit, even the ability to open a bank account because of the source of their livelihood. Sex workers are also often at risk of losing their children in custody battles due to the nature of their profession. Legislation is often passed under the guise of “protecting sex workers and stopping human trafficking,” yet in practice those laws can put an already marginalized population at further risk.

For more information about the International Whore’s Day March in Los Angeles and other cities, click here.