Written by Daniel Villarreal on February 12, 2021
Be first to like this.

It’s that time of year again where if you don’t care about Valentine’s Day, you better pretend like you do. Worldwide, we romantic fools spend almost $450 million on candy, purchase over 58 million pounds of chocolate and 36 million heart-shaped boxes every year during the week of February 14 — that’s a lot of dough!

But while such sentimental traditions might seem annoyingly trite, they’re deeply rooted in our cultural history. And if we don’t rise up to meet our lover’s expectations each mid-Febraury, we risk being seen as unromantic or worse, cold and inconsiderate.

But true romance doesn’t lie in a chocolate box or flower bouquets; the love is in the meaning behind them. So why not impress the one you love (or the one you pretend to love) with this brief history on how this whole chocolatey, flower-covered mess got started? Here are the basics:

Why do we give chocolate boxes?

Every year, nearly 46 million heart-shaped boxes get sold for Valentine’s Day, and most of us have no idea why the hell we do it. Turns out the tradition began as a marketing idea (surprise, surprise). But don’t feel like a sucker — it’s a marketing game you the customer can benefit from, if your lover has a sweet tooth.

You should know that the Western idea of Valentine’s Day as a romantic holiday began in 1382 when Geoffrey Chaucer (the guy who wrote The Canterbury Tales) first mentioned Valentine’s Day as being associated as a romantic holiday. During those medieval times, people became obsessed with the idea of courtly love; that is, tales of noble knights winning a lady through bold feats and chivalrous demonstration of love. In those days, knights gave roses to their maidens and men who wanted to be knights tried the same thing.

In the Victorian age (1819 – 1901), the Cadbury family manufactured most of the chocolate in the English-speaking world. During the 1840s, Cadbury saw an opportunity to sell more of his product and started selling them in beautifully decorated heart-shaped boxes that he himself designed. It’s widely believed he was the first to ever produce a heart-shaped box full of chocolates. These boxes became a huge success and were so beautiful that customers kept them as containers for personal mementoes.

Today, some British people still have Cadbury boxes as family heirlooms and they’re worth hundreds, even thousands of dollars. Meanwhile, if you go into any CVS across America, you’ll see a generic version of the Cadbury box — a cheap styrofoam heart-shaped box for $8.99. We’ll take what we can get, right?

What’s the deal with roses?

Throughout history roses have symbolized love, but why? According to Roman mythology, the rose was said to be the favorite flower of Venus, the goddess of love and the mother of Cupid. Thus, people gave roses to each other in hopes that Venus might look down and bless them with passion. Islamic poetry as well commonly associated roses with beauty and divine love.

Accordingly, for the last two thousand years or so we’ve associated a roses and their scent with the emotion of love, which is why so many perfume and skincare formulas often contain rose oil in their ingredients.

It was the Victorians however (yes, them again) that began a new tradition called floriography, or “The Language of Flowers,” to communicate unspoken feelings. Yellow signified friendship and devotion, while red indicated passion and love. That’s basically when they started the tradition of giving bouquets of flowers as tokens of soft, delicate, blossoming love. It’s also part of the reason so many people hate Victorians — roses are expensive, yo.

The classic symmetrical heart shape is more a symbol of love and devotion rather than the actual shape of our fist-sized, blood-pumping organ. The shape dates  as far back as the 1400s where it first appeared onEuropean playing cards to mark one of the red suits. Some sources have said it goes back even further than that.

One theory is that it’s a representation of a woman’s butt or her vulva, which if you look closely (as I’m sure you have), looks like two half-hearts surrounding her clitoris — romance! Another theory is that the shape derives from the silphium plant in Africa whose seedpod resembles a Valentine’s heart. Because the plant doubled as a contraceptive, it soon became a symbol associated with sex and love. 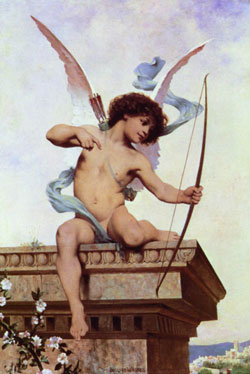 Who the hell is Cupid?

Often seen as an annoyingly happy baby in a diaper who shoots an arrow and makes people fall in love, it might surprise you that Cupid’s original task wasn’t with love, but rather with lust. Known in Roman mythology as Cupid and in Greek mythology as Eros, he was originally connected to the less amorous concepts of desire and power.

It wasn’t until writers and painters started using him as a symbol of attraction and affection that the bouncing baby became synonymous with love and Valentine’s Day in general. It’s said his youth and wings represent the immaturity and flightiness of lovers, where his arrows represents the power of love to wound hearts. In the medieval times, people were obsessed with the idea of Cupid and drew pictures of him as an attempt to welcome love inside their homes.

Why do single people hate Valentine’s Day so much?

Valentine’s Day comes right before February 15th or, as its more modernly known, Singles Awareness Day (SAD). SAD came along as a way to remove the Valentine’s Day thorn in most single people’s sides not because it’s annoying to watch rows of happy couples hold hands on the street, but because as a society we’re taught to believe that we somehow aren’t good enough if we happen to be single on this day.

As a single person, I’m in the minority. I honestly don’t give two farts about it one way or another. But for hundreds of years V-Day has been propagated through the ages as a strictly two-person affair — so much for polyamory.

I’m sure our ancestors never considered single people during the cultural creation of Valentine’s Day since it was normal for young people to have marriages setup for them. Folks typically weren’t single unless their spouses had died, but I digress…

Some single people love being single. What they don’t like is the constant reminder that their lives aren’t valid otherwise. So if you’re in a relationship, don’t look down on your single friends this holiday. Trust me, they love to love just as much as the next person. But they hate (and I mean hate) people who tell them they need a man or woman to make them happy. It’s not the holiday that hurts, it’s the ugly message it insinuates.

Instead of pitying them, go give them a box of chocolates, some roses, a heart-shaped letter or a big hug and let them know there’s lots of love in their lives — cupid and Cadbury be damned!

What do you think about these Valentine’s Day traditions? Any others we forgot? Let us know!

The Final Episode of 'Dinosaurs' Is Still the Saddest, Most Poignant Finale in TV History
The Guy Making Us Swoon This Week is 'WandaVision' Star Paul Bettany
New Study: Semen Exchange During Sex Can Make You Less Depressed
Radha Blank's 'The Forty-Year-Old Version' Tells a Story of Tenacity We All Need in 2020
English