Meet Donna Trump, the Anthropomorphic UK Queen About to Make Her NYC Debut

Written by Hornet User on September 14, 2018
Be first to like this.

It’s Friday night in Manchester, U.K., and the doors to Cha Cha Boudoir have just opened. The club night, described as a place where “passion, glamour and illicit behaviour is wrapped up in one night of camp performances and soapbox disco,” sees an array of outlandish and extravagant personalities — and outfits — enter for a view of the city’s thriving queer culture. But there’s one person hanging around the entrance who can’t quite bring themselves to enter the club — not tonight, anyway. After an hour of almost plucking up the courage, they eventually decide to go home. But they’ll be back.

Flash forward to two and a half years later and that same person is now a fixture of Manchester’s bustling queer scene, known as the incredibly named Donna Trump.

The drag star made her debut at the exact same club night she didn’t have the guts to attend those few years ago. “My first performance was of a 1940s pink housewife,” she tells Hornet while sitting on a bus across from a group of rowdy children. “The idea was that she was being suppressed by her husband who had a hold on her because of the pressures of society. I took a lot of time trying to think of how I could make this entertaining while still being educational.”

Ultimately, the housewife was an elephant, the husband her circus ringmaster. The performance ended with the elephant literally becoming a trophy wife on the wall of her husband’s stately home. “I’m definitely a subtle person,” she tries to convince us — unsuccessfully.

“Does my horn look big in this?” Donna Trump asks (photo via Instagram)

This U.K. queen, real name Kieran, actually performed under the name Knickerbocker Glory that first night, but a drunken conversation about silly drag names resulted in “Donna Trump” as the name that stuck. “The two reasons were the politics lying around it, and the fact that when you say it in a Birmingham accent it sounds like a fart joke,” she proudly admits.

When asked about how family responded to discovering Donna Trump, she happily tells us, “They see it as something that I really love doing and think it’s really creative. They’re really proud of me.” A sister, aptly named Donna herself, proudly shares videos of performances around the office.

“People say I’m a very confident person but I’m actually kind of an introverted extrovert, one of those paradoxes. I definitely feel like when I’m Donna Trump, I can achieve anything. The possibilities are really endless. 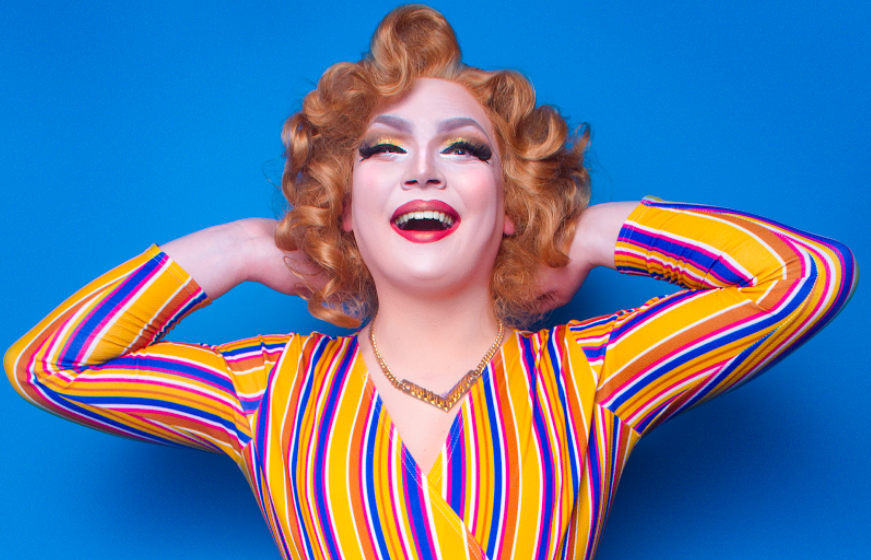 “I think Donna Trump is just a much more heightened version of me. It’s a happy medium, but there’s definitely areas where I can see my confidence has been lifted because of her.”

In the local Manchester scene, Donna Trump is most recognized for her stand-out characters, which form the storytelling part of a crowd-pleasing lip-sync and comedy routine. Alongside elephant housewives she’s performed as a range of animals including a dragon and Donald Duck — many of which have been the results of collaborations with other artists, like Lizzie Biscuits. One notable performance involving an air hostess dodo bird singing R. Kelly’s “I Believe I Can Fly” has helped Donna Trump get noticed around the world.

While on the surface the performances are meant to incite laughter, there are also elements of politics to many of them. “One of the biggest inspirations behind my anthropomorphism was George Orwell’s book Animal Farm,” she tells Hornet.

Admiring the allegorical way Orwell was able to talk about politics and society, the book became a blueprint for Donna Trump. “Particularly in our society today, people don’t want to talk about politics because it creates arguments and tension,” she says. “When it was being discussed through pigs and ducks, everyone was fine with it.”

“The idea is to give people enough escapism but still keep them woke, as we say, to what’s going on in the world. Every kind of animal I channel will have some politics behind it, whether it’s a ‘big P’ or a ‘little p.’”

The politics aspect is particularly important, considering Donna Trump’s name and its associated connotations. “I think it’s my responsibility to make people aware of what’s going on, and I try to mention everything that man in the White House does,” she says. And the name has come with its downsides: “There are some people who genuinely believe I named myself after him because I idolize and worship him. It’s really funny that people think that, but I am definitely not agreeing with what that man is doing or saying.”

Having been taught the ways of the drag world by legendary Manchester queens Anna Phylactic and Cheddar Gorgeous, Donna Trump has gone on to perform alongside many stars of the RuPaul’s Drag Race phenomenon. In fact, she now calls Sasha Velour a friend. Full of praise for the Season 9 Drag Race winner, she says, “I think a big turning point for me was getting to work with Sasha, because it was someone I really admired the work of and I was just enamored by how they put themselves across.”

More recently Donna Trump experienced another side of Manchester’s nightlife while on a bar crawl with some of the queens from Dragula. (The Boulet Brothers just produced a tour of the UK featuring some of that drag-based reality competition show’s past contestants and winners.) Following their night out, Dragula Season 1 winner Vander Von Odd publicly called out the Manchester Eagle for denying entry to a female in their party, as it’s a male-only basement bar.

About that bar incident, she says, “The only response people could give us was, ‘Oh, that’s just how it’s always been.’ Why is it still like that though? It wasn’t about not being allowed in the bar because of this or that, it was just the attitude of the door staff and how we were denied information. We need to be able to have a conversation about things going on. Judging people for not fitting into a specific category doesn’t help anyone.”