Those Gay Images of Putin & Trump: Homophobic or Subversive Shattering of Toxic Masculinity?

Written by Daniel Villarreal on July 21, 2018
Be first to like this.

This week saw several LGBTQ critics accuse The New York Times of homophobia for publishing a satirical animation depicting an over-the-top romantic date and makeout session between U.S. President Donald Trump and Russian President Vladimir Putin. It was the latest of allegedly homophobic Trump jokes and images portraying the two as secretly gay lovers. But film critic Matthew Hays (who happens to be gay himself) says the images aren’t homophobic but rather subversive attempts to shatter each leader’s fragile hyper-masculinity.

The New York Times’ cartoon was the second of a three-part series of satirical animated short entitled “Trump Bites.” Two-time Oscar-nominated animator Bill Plympton created the shorts. In addition to having his work on MTV’s indie-animation show Liquid Television during the early ‘90s, Plympton has also animated music videos for Kanye West and “Weird Al” Yankovic.

The video, set to actual audio of Trump expressing his love of Putin, shows Trump squeezing Putin’s nipples while the two ride a unicorn in a land of butterflies and rainbows. They then kiss for a full 17 seconds, with an 11-second image of their tongues entangling, set to the sound of moaning.

In this episode of Trump Bites, Donald Trump’s not-so-secret admiration for Vladimir Putin plays out in a teenager’s bedroom, where the fantasies of this forbidden romance come to life. https://t.co/h5gpVJzj69 pic.twitter.com/f4aBEOfRYt

Naturally, Plympton’s cartoon isn’t the first depiction of Trump and Putin getting gay together. In May 2016 a Lithuanian mural depicting Trump and Putin kissing went viral, the text upon it reading “Make Everything Great Again.”

Numerous comedians have made jokes about Trump being Putin’s gay lover, usually implying that Trump is the receptive partner in oral sex. In May 2017, American comedian Stephen Colbert uttered a similar jab in his opening monologue, telling Trump, “The only thing your mouth is good for is being Vladimir Putin’s cock-holster.”

There have also been a handful of memes showing the two as a gay couple.

Here’s a gallery of 12 other images of allegedly homophobic Trump jokes showing him getting lovey-dovey with Putin:

Some LGBTQ people say these are all homophobic Trump jokes that are both anti-gay and bottom-shaming. Others say these jokes aren’t homophobic but are merely subversive, trying to get under the skin of these two anti-LGBTQ leaders.

Matthew Hays, a self-described “queer film buff who teaches queer cinema and has written extensively on the subject of LGBT imagery on-screen,” agrees more so with the latter. He says The New York Times cartoon is trying to shatter each leader’s veneer of masculinity.

In a recent opinion column, Hays writes, “On first glance, these images may seem only to demean people who are in same-sex relationships,” but, he adds, “By imagining that two leaders might be queer … in very public media spaces like The New York Times … these images and ideas are asking us to question our ideas around masculinity, machismo, gender roles and dominant codes and types of sexual behavior.”

Trump and Putin ride a unicorn farting flowers in a cloud-land amidst hearts, butterflies and rainbows in Bill Plympton’s second installment of “Trump Bites”

In short, Hays considers Trump and Putin as “parodies of fragile heterosexuality.” In real life Putin rides horses shirtless and Trump judges beauty pageants, has multiple mistresses and has bragged about grabbing women “by the pussy.” Both cast themselves as strong, virile leaders who will restore glory in their home countries. Both have also tied their macho legacies to policies of homophobia and transphobia.

Hays thinks the super macho image they put up is a fraud, and he considers cartoons like Plympton’s a “brick through the looking glass” — a way to shatter how these men see themselves. Hays says images like Plympton’s mock the “very idea of a heterosexual ideal” and the ideals of fascism itself, as fascist propaganda throughout history has tended to be intensely homoerotic.

What do you think of these images? Are they homophobic Trump jokes or subversive political humor? 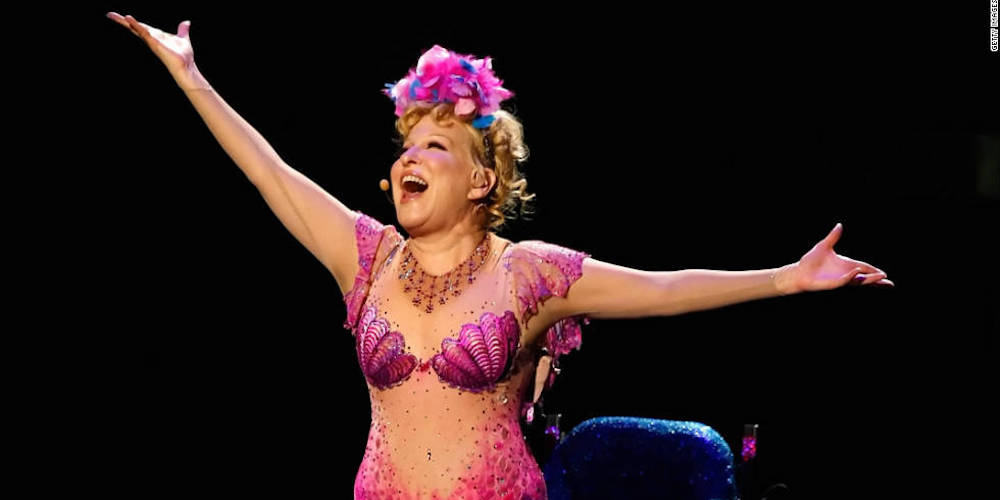