This post is also available in: العربية Español Français Português

Tom of Finland isn’t just one of our favorite artists. He’s an inspiration. And it just so happens to be Tom of Finland’s 100th birthday!

We reached out to Durk Dehner, the co-founder and president of the Tom of Finland Foundation to talk a little bit about some of our favorite queer artists inspired by Tom of Finland.

1. Untitled by Tom of Finland

Here is the artist’s mastery in his craft. His adoration of the male species, and in particular black men, creating such amazing iconology. This work will be part of a volume we are currently working on, titled Black Magic.

avaf is comprised of two male artists from Brazil and France. Here they are combining Tom’s work with their signature bold expression. This collaboration is also available as prints and a clothing line, available from the Tom of Finland Store.

The subject, Nathan, is part of a traveling circus troupe and is as dreamy as he looks. He and Florian stayed together at TOM House during Hetz’s recent artistic residency here.

4. Durk: The Leatherman by Etienne

Dom was a close friend of Tom’s. They both thrived on the magnificence they found in men, transforming them into gods. Dom was the person who brought Tom and I together.

Lost way too soon to the HIV/AIDS epidemic, Lynch’s work continues to be honored here at the Tom of Finland Foundation, where it’s enjoyed and will be an inspiration for generations to come.

6. The Fireman by Patrick Lee

Patrick Lee was introduced to the Tom of Finland Foundation when he entered — and won! — our Emerging Artist Competition. I like to think that that boosted his self-confidence, helping him become a renowned artist. His take on men is rough, yet tender. His expression is so simple, yet complicated — just like a real man.

7. The Kiss by Jim Wigler

Jim Wigler’s work is everlasting. Shot 30 years ago, his work still is important to leather, gay and pop culture. We’re all drawn to passion in all forms. Jim was a friend of Tom’s and captured some amazing photos of Tom and me, early in our relationship.

Rinaldo Hopf created this piece during his artist residency in 2017. The subjects take after Bob Mizer’s photographs of Hollywood boys. He has been a close friend of the Tom of Finland Foundation for over 30 years — and Hopf also co-edited My Gay Eye.

Jim French made a permanent mark on gay culture, leaving behind a huge, beautiful body of work. This photograph is from Colt Studio’s Manpower #6: The Leather File.

Guyther was a photographer for Vulcan Studio, based first in New York, then Hollywood. Bodybuilder, actor and model, Ed Fury, was at his peak of popularity at the time of this photo, both with the public and photographers. The Foundation holds a sizeable collection of early physique photography by many of the greats dating back to the mid-’50s. 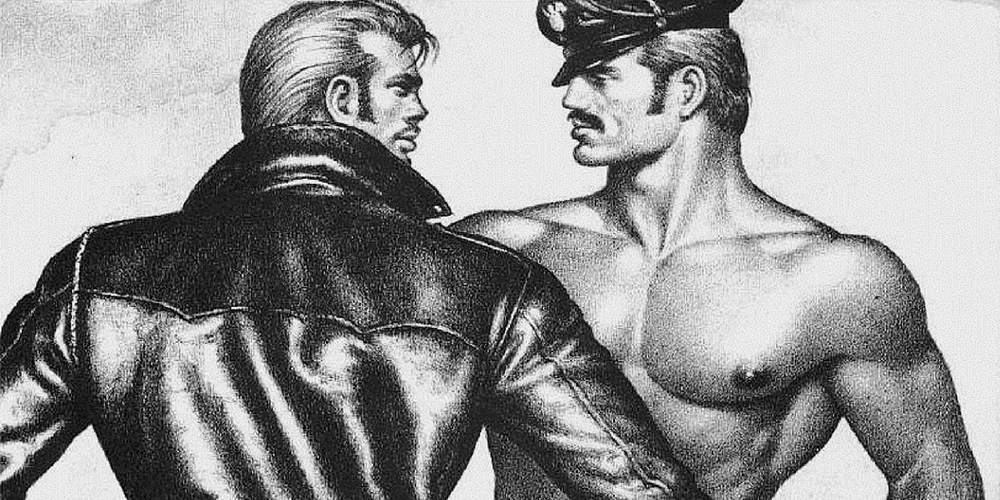