Love Is Dead: Comics’ Most Popular Queer Relationship Has Ended

Harley is the one to end things, encouraging Poison Ivy to find her own path the way Harley has been able to herself. While it’s sad to see one of DC’s more prominent queer couples call it quits, we’re glad to see that Harley is encouraging Ivy to grow and we hope that means they’ll find each other again.

In the meantime, to console ourselves we’ve decided to take a look back.

Here are some of our favorite Harley Quinn and Poison Ivy moments over the years and throughout the various DC universes: 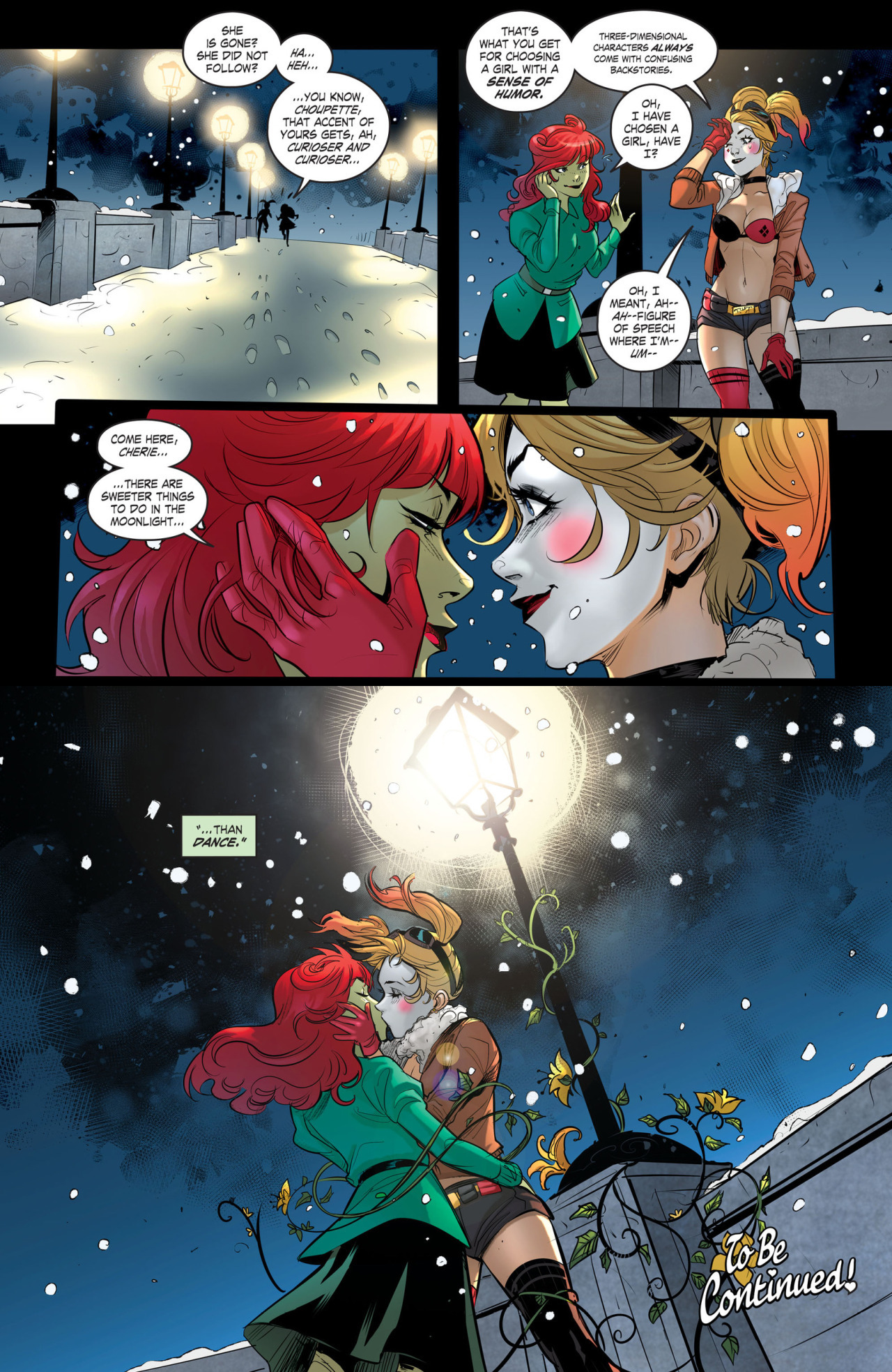 The Bombshells comic series takes place in an alternate universe where the women of the DC universe are at the front lines of World War II. Written by Marguerite Bennett with art by Mirka Andolfo, the two give life to one of the most important moments in the iconic duo’s relationship in the pages of Bombshells #42. With the romantic backdrop of a snowy winter’s Berlin night, Harley Quinn and Poison Ivy share their first depicted comic kiss after the two deal with Joker’s daughter at her Berlin Cabaret.

In 2019, DC began airing Harley Quinn, with two seasons currently available for streaming on HBO Max. It starts off with one of our favorite moments, one that really begins to plant the seeds for the growth of Harley and Ivy’s blossoming relationship. Harley Quinn is stuck in Arkham Asylum waiting for the Joker, who had promised to break her out. After various fellow inmates try and fail to convince her that he’s not actually coming, Poison Ivy takes it upon herself to break Harley out during a riot. Poison Ivy, not one for caring about humans, shows that she does really care about Harley.

Taking place in-between Season 2 and the unaired Season 3 of Harley Quinn, the limited spin-off comic series Harley Quinn: The Animated Series – The Eat. Bang! Kill. Tour written by Tee Franklin with art by Max Sarin, follows Harley Quinn and Poison Ivy on the run — not only from GCPD but villains as well — after Ivy left Kite Man at the aisle.

The DC fighting video game Injustice has spawned its own tie-in comic series. Even though it’s not the main DC comics timeline, this series did give us one of the more romantic Harley and Ivy moments when they got married in the pages of Injustice: Year Zero #8. Their wedding featured an Elvis impersonator as their officiant.

5. That car moment from Batman: The Animated Series

Even though we’re heartbroken about Harley Quinn and Poison Ivy breaking up, at least we have some of these moments to reminisce over. We’re hopeful these two will find their way back to each other soon.

What do you think about the Harley Quinn and Poison Ivy break-up?

Drinking Beer Can Be Healthy: A Dietician, a Counselor and Two Brewers Tell Us Why
Sex With an Ex Isn't Always Unhealthy. Sometimes It's Just What You Need.
Heavy Is the Wig That Wears the Crown: An Oral History of the Miss Gay America Pageant
13 TV Witches of Past and Present Who Have Cast a Spell on the Small Screen
English