Written by Daniel Villarreal on January 6, 2018
Be first to like this.

Chris Zylka is the 32-year-old actor who just proposed to celebutante hotel heiress Paris Hilton. On the HBO dramatic series The Leftovers he played Tom Garvey, a young college dropout who eventually took refuge with a mysterious guru. In one episode, he had a full-frontal scene, which basically means that a lot of people have seen Chris Zylka’s penis, and thus, the penis of Paris Hilton’s fiancé, which is … interesting.

Zylka proposed to the 36-year-old hotel heiress during a weekend ski trip in Aspen, Colorado. The engagement ring was a 20-carat pear-shaped diamond and set in a platinum split-shank halo band worth $2 million — gotta bring your A-game when proposing to an heiress.

The couple had met at an Oscars party eight years ago, but Hilton only announced their relationship via Instagram last February.

Here’s a video of Chris Zylka’s proposal to Paris Hilton:

Zlyka has guest-starred on shows like Cougar Town, Everybody Hates Chris and Hannah Montana, but he is perhaps most known for his role in The Leftovers.

In Season 2 Episode 3 of the show, he was carried off while naked from the waist down and viewers got an eyeful of his penis. Here is it is below. (Click the image to see the uncensored version.)

Here’s an image of Chris Zylka’s penis in The Leftovers: 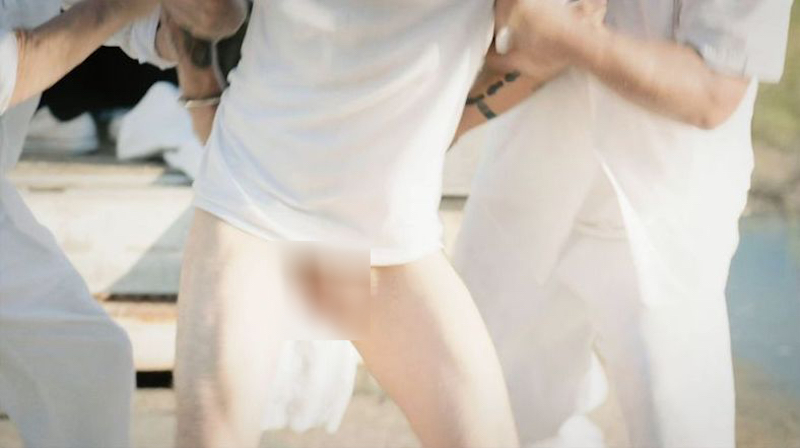 He also starred as Jake Armstrong in the CW show The Secret Circle, a supernatural teen drama set in the town of Chance Harbor, Washington about a teenage girl who discovers that she comes from a powerful lineage of witches. She is part of a “secret circle” of protectors whose presence also attracts dark forces like dark magicians and witch hunters.

Zylka played Jake Armstrong, an older brother who once worked for a group of witch hunters. He later discovered that witches had not killed his parents (as he had been lead to believe) but they had in fact been killed by witch hunters.

Here’s a video of Chris Zylka shirtless in The Secret Circle:

His character had a sexual relationship with another free-spirited witch named Faye Chamberlain. As a result, he ended up doing some sex and shirtless scenes, stills from which you can see above.

We Made a List of Every Time the MCU Straightwashed Its Queer Potential
Motivate Yourself to Get Fit Without All the Body-Shaming
Gay Guy Gets a Card From His Grandparents: ‘Happy Birthday, You’re Going to Hell!’
10 Trans YouTubers You Should Be Watching
English