Written by Daniel Villarreal on August 15, 2018
Be first to like this.

In the Wesley Woods gay bashing video posted after the attack, Woods said, “My best friend and I were brutally attacked by three straight, white, hetero men in West Hollywood, California. Why you might ask? For being gay.”

While Woods encouraged viewers to stay aware of their surroundings and to only fight attackers as a last resort, the one-minute video didn’t provide details of the Wesley Woods gay bashing or much about his emotions afterwards — understandably so.

So we sat down with Woods to learn more about the Wesley Woods gay bashing and how he’s been doing since.

Nevertheless, he says he didn’t share the original Wesley Woods gay bashing video for sympathy but merely to make people aware of the need to stay aware of their surroundings, even if places that are seemingly gay-friendly like West Hollywood.

The following interview has been edited for clarity and length.

Hornet: In your original Wesley Woods gay bashing video, you said your attackers were heterosexual. How could you tell?

Wesley Woods: Oh, man, because I am from a small town in East Texas, I know when I see them. From their dialect to the way that they were shittily dressed, they screamed hetero.

We were on the hetero side of town. They were on Sunset, coming down towards my friend’s condo. Sunset to Santa Monica in L.A. is very different. Santa Monica is faggoty…. There’s rainbow crosswalks. You go up to Sunset, and it’s where, you know, it’s straight world, it’s straight clubs and everything in between.

It was very obvious, and I don’t really ever hear of crimes where gay people are yelling “Faggots” and “Fuck you, dick suckers” and “You fucking faggots” and “Pussies” to other gay people. I’ve never really heard of that. That’s how I knew that they were straight.

It’s not even about their sexuality, per se, but it definitely needed to be addressed that they were white.

I actually had a couple people reach out, the first thing they asked is, “Are they black, are they brown?” Then they asked, “Oh, they’re white?” That is just crazy to me, so that’s why I was very adamant about making sure that people knew that they were white. People messaged me, they all assumed it was someone of color. That’s so crazy to me. No one asked, they just assumed.

That pisses me off. In sixth grade, I was a member of an all-black girls step team called PYT (a reference to Michael Jackson‘s song “P.Y.T.” which stands for Pretty Young Thing). I grew up with black influences, and so I take it personally, because I relate to my childhood friends, the people I know and I’ve known forever.

The original Wesley Woods gay bashing video didn’t really mention too many specifics. Can you tell me how the attack went down?

I was so oblivious to them until they started yelling at us, do you know what I mean? I was just living my life.

We left West Hollywood gay area. I was actually out recording some friends who were at a drag show at Rage nightclub that night, and we stayed out. had drinks, left and I wanted something to eat, as most people do when they’re a little intoxicated, so I asked my friend if we could walk over to the McDonald’s by his house, it’s just right there, Crescent Heights and Sunset, major intersection.

They happened to be closed by the time that we got there. And I honestly blame McDonald’s (laughs).

I honestly think that like [McDonalds] being closed enraged them in some sort of way, honest to god. I know that sounds crazy, but I don’t think people are always rational when they’re really hungry.

They followed us from the restaurant, about two to three apartment complexes down south on Crescent Heights, to where my friend lived. And this all actually happened right outside of his door.

We were so close to being home, but the entire walk home, looking back at it now, I know that they were sizing us up. They were planning it.

The name-calling stopped at some point, and they tried to become friendly. I was just walking, not speaking, not saying anything, my friend was kind of doing the same thing. We were just like, “We’re going home, leave us alone,” kind of thing.

One of the guys literally starts banging on his chest like a monkey, hooting and hollering like a fucking monkey, and I’m not exaggerating when I say that. That’s when I knew that we’re not dealing with someone that’s normal.

My friend said, “What the fuck is your friend trying to do? Are y’all trying to fucking intimidate us?” I can’t remember what their response was, because everything is just kind of chaotic and blurry, but I do remember them somehow separating us and getting in between us in some sort of way…. it happened so quick.

One of them went towards him and two of them came towards me. There was one guy right directly in front of me, and then there was a guy that was trying to run around to my right to get behind me, or to the side of me.

I felt my friend get tackled, and so I knew that it was on. It was brutal. I… (starts crying) Whew, sorry. Every time I talk about this, it’s crazy, it just keeps bringing it up. I don’t know … All I know is there was a moment, as I’m on my hands and knees getting punched and kicked, that in my world, my reality, shit was not good.

My mind immediately went to my friend, and what is he experiencing, because in what I was experiencing at that moment, I knew I couldn’t do anything to help him.

I was doing everything I could to just protect myself, and that is probably the hardest thing to actually have to really kind of work through, is that knowing it was out of my hands.

We fought. We ended up getting the upper hand towards the end of the fight, and two of them ran off, and the other one was pinned down on the ground underneath me, and my friend kind of separated us, and he ended up running off.

I thought my tooth had been knocked out, and I look over at [my friend].

He said, “You know, the base of your lip is really bad,” so we go in using my shirt as a rag and realize that my lip is hanging off, and that I probably need to go fucking get stitches.

So, once we get to the emergency room, we meet with a police officer, tell him what happened, where the incident occurred, got my stitches and here we are. It was just wild. I’d never seen someone act like a fucking animal, and I’d never…. I don’t know how to put it into words.

How have you been doing since the attack?

Literally since that day, me and my friend that were together, we never left each other’s side (until the following Monday). It’s been traumatic. There was a girl getting out of her car the other day and shut her door. She was on the other side of the street. For some reason, the door slamming startled me, like your heart startling out of your chest scares you.

I walked past a tree and there were tree trunks that looked like fucking legs, and I was like jumping because I thought it was a fucking person there. That part has been surprising to me, is like how your mind subconsciously can still dictate the reality of where you live. Does that make sense?

It’s weird, because I’ve always been brought up in a place of like love, and like my mom’s dad was murdered when she was really young, so she never really had, really, a family or a sense of community, so she was very strong in developing that in me and my brothers at a very young age, so I almost became a protector.

And I’m angry at the fact that I could have hurt them, and I didn’t want to hurt them, at the end of the day. It’s really a mindfuck.

Like, yeah, they fucked me up. But I’m not this kind of fucking hero. I’m blessed and have lived through that and have experienced it, and have etched it into my narrative of life, to propel me. I don’t want to be a victim of it, and I don’t want other people to feel that way either.

Just be with love and just be you. At the end of the day, we’re not going to cower. Live out loud. Honest to God, the only thing that’s ever going to happen in this life that we can all count on is death. And if that’s the one thing that we should be afraid of, that’s already going to happen, so live your fucking life. 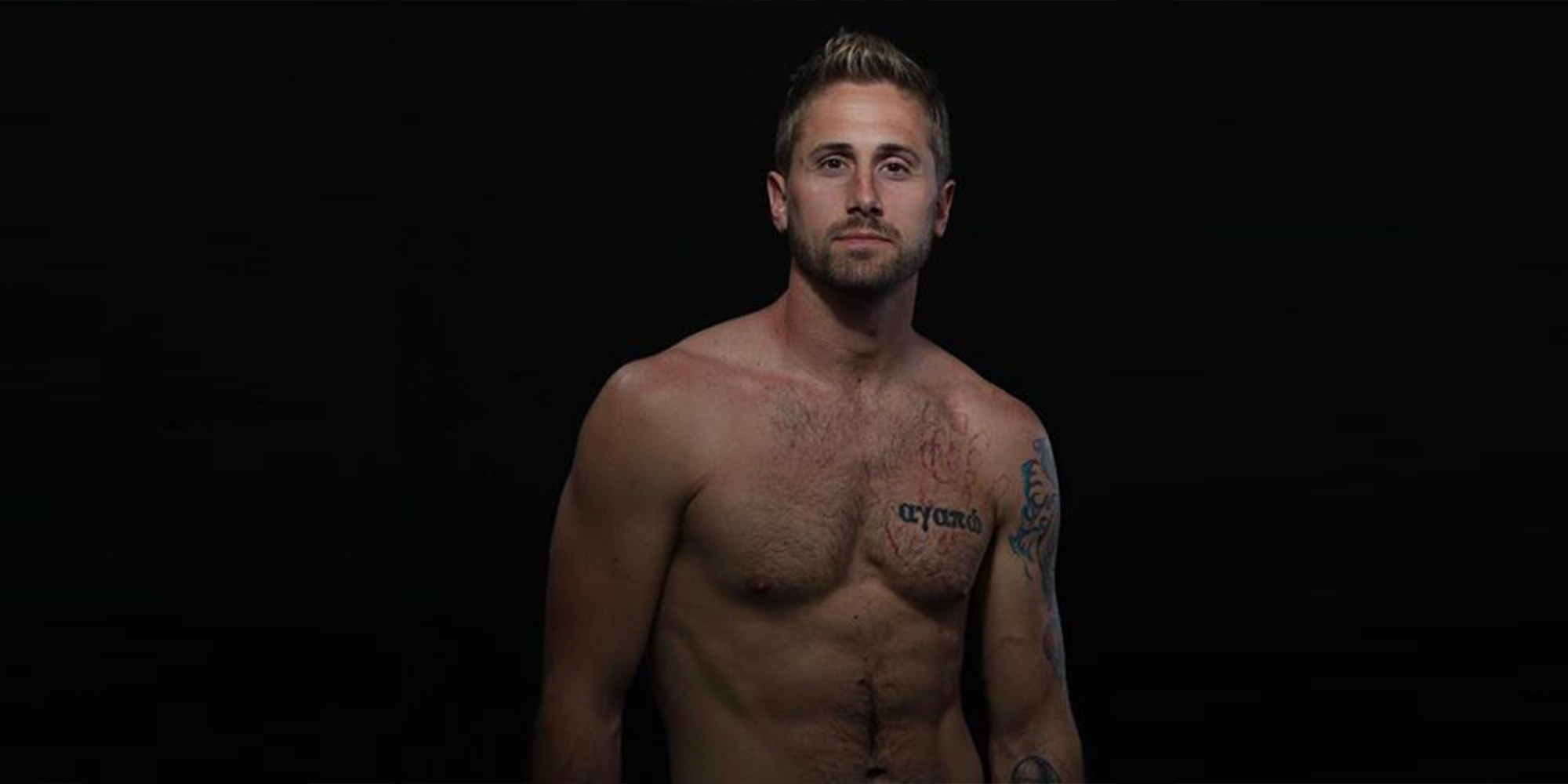